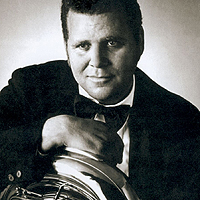 Johnson performed the memorable tuba lines for the “Jaws” soundtrack as well as dozens of other blockbuster films.

In death and in life, Tommy Johnson’s music is striking a chord with people around the world.

The longtime tuba professor at the USC Thornton School of Music and USC alum was widely acknowledged to be the most-heard tuba player on the planet.

His memorial concert, held Dec. 3 in Bovard Auditorium with 99 (count ’em, 99) tubas on stage, is capturing the imagination of the public.

On Dec. 5, The Washington Post ran a long feature on the 99-tuba salute. National Public Radio aired a segment on “All Things Considered.” The Canadian Broadcasting Corporation program “As It Happens” also chimed in.

Jim Self, a fellow tubaist and USC colleague who conducted the concert, told the more than 1,000 fellow musicians, friends and family gathered to honor Johnson that it was a performance never attempted before and may never be repeated.

Johnson, who performed the memorable tuba lines for the “Jaws” soundtrack as well as dozens of other blockbuster films, including the “Indiana Jones” trilogy, “The Godfather,” “Titanic” and “Close Encounters of the Third Kind,” died in October at the age of 71.

His death prompted an outpouring of remembrances at the concert and in a 50-page color program that detailed his life and times.

The service began with a group called The Tubadours playing outside the auditorium, including “Keystone Chops,” a number performed by the UCLA Tuba Quartet.

A march from the movie “1941” composed by John Williams later was played by a combined USC/UCLA tuba/euphonium ensemble.

Another highlight was a slow version of “Take Me Out to the Ball Game” that originally was arranged for the memorial service of Arthur Maebe, a legendary French horn player. Johnson, like Maebe, was a huge baseball fan. At Johnson’s service, the song was rearranged to highlight the tuba.

In the words of William Booth of The Washington Post, the moment was laden with emotion.

“The song holds a secret and a surprise,” Booth wrote. “Slowed dramatically, with the deeper bass playing vibrato, the ensemble transformed it into a kind of dirge that would be appropriate at Arlington National Cemetery. And it’s one, two, three strikes you’re out at the old ball game. It made your chest hurt. It was summer turning to fall. And when the song ended, there was a sadness, and one of the trumpet players on stage could be seen wiping away a tear.”

Musical tributes were played on trumpet, violin, piano, cello and euphonium by several of Johnson’s musically talented grandchildren and other relatives.

The last musical selections, performed by the mass tuba/euphonium choir, were “Fanfare for a Big Man,” written by Self, and Tchaikovsky’s Fourth Symphony.

The Post’s Booth wrote “What is the sound of a hundred tubas in full-throated song? It had the ring of the Voice of God. Very big. Very blaaat.”

The program detailing Johnson’s life and accomplishments can be viewed at http://www.tommyjohnson.org

Sounds of a 99-Tuba Salute