The lobby of the USC Fisher Museum of Art was buzzing Wednesday night. The energy in the room marked the return of the Films Reflecting Ourselves: FRO Fest, the film festival created to celebrate the films of Black creatives working on-screen or behind the scenes.

“We did a virtual event in 2021, but it definitely has different energy when you are in-person,” says Greedley Harris, manager of strategic partnerships for USC Student Equity and Inclusion Programs. “You can feel people’s energy. You can hear the laughs and people coming together and interacting.”

The evening, he says, is about “celebrating our Black creatives.” It allows their peers and members of the community to enjoy the featured works, and also serves as a reminder that artists of color are still struggling with representation.

Research shows that people of color face numerous barriers when trying to make strides in TV and film. According to a study by the USC Annenberg Inclusion Initiative, even though women have made progress attaining more seats in the director’s chair, women of color have not been given the same opportunities. The study covered 1,388 top grossing films from 2007-2021; 66 of those films were directed by women, but only 15 were directed by women of color or from underrepresented ethnic groups. 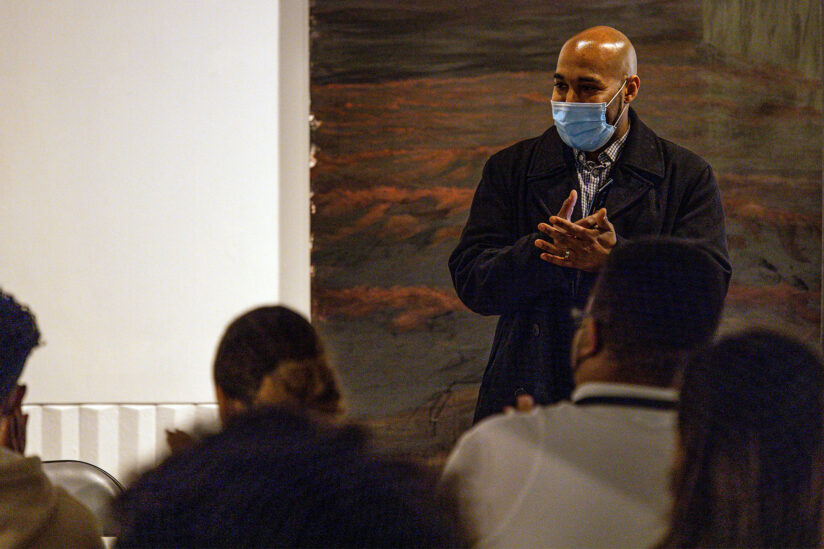 “I’m a Black woman in this program where I don’t see myself represented,” says Nana Frimpong, a Master of Fine Arts Student at the USC School of Cinematic Arts and director of the documentary Healing in Color. Frimpong was one of three Black women in her class; her film pointed the lens at Black women fighting stigmas of what Black women should be and their healing of past trauma through art.

Throughout the filming, she struggled as her peers questioned the people she was documenting. They questioned the subjects’ stories, calling them disingenuous or labeling the participants as “not likable.”

“That was really hard to take on throughout the documentary,” said Frimpong. “It was the most difficult and the most liberating because it showed us the power we have. There’s power in pointing a camera towards something or someone that they don’t think they want to see, or they don’t think is worthy of being seen. That’s what I’m most proud of when it comes to our film, because we pointed and did it anyway.”

While strides are being made on-screen and in the director’s chair, the numbers lag when it comes to off-screen roles. A recent report by McKinsey & Co., which studied staffing in films released from 2015-2019, showed that only 4% of writers were Black, and only 6% of producers in those films were Black.

Importance of films from Black artists

Tia Wren — writer and director of The Woman Who Shattered the Earth, a film featured at the event — said it was important that the source material for her film about the Black experience was coming from a Black artist.

“One of the most rewarding things for me, after the film was done, was getting to see how people connected with the film,” said Wren, whose film is about a Black woman releasing herself from the burden of preconceived societal expectations. “My actors being able to relate to the material, seeing that other people felt what I felt and being able to be seen through the film.”

Each year the Center for Black Cultural and Student Affairs sends a message to Black creatives at USC; being a film or drama student isn’t required to have work showcased at the festival. Harris notes that some non-film students have change their major after solely due to the inspiration brought on by taking part in FRO Fest.

“This event allows them to showcase their work,” says Harris, “not just to their peers but also to the community. And it also provides an opportunity to network.”

Since the inception of FRO Fest in 2019, the evening has become a staple in CBCSA’s celebration of Black History Month. The showcase is a collaborative effort with the USC Fisher Museum, the USC School of Cinematic Arts, the USC School of Dramatic Arts and the African American Cinema Society.

The event with panel discussions, music, food and fun capped USC’s most vibrant celebration of Black History Month yet, a series of events focused on the joy, health and vitality of the Black experience.

Reimagining a century-old Black gospel hymn that continues to inspire

Pastors advocate for their people from the pulpit and on the streets — and training at USC gives them the tools to take their work further.

USC experts examine Black health and wellness, the national theme for Black History Month 2022. It shifts the public mindset to a more positive and mindful perspective.