USC President Carol L. Folt has signed a memorandum of understanding with the U.S. Space Force, bringing the university into a select group of academic Space Force partners.

The Space Force’s University Partnership Program will bolster research and leadership development for students and faculty. The partnership will enhance STEM study and research projects that foster national security objectives in the space domain. It also will offer scholarship and mentorship opportunities for students, faculty and Air Force cadets. Space Force is an independent military service under the Air Force.

This is a remarkable and exciting extension of USC’s longstanding partnership with the U.S. Armed Forces.

“This is a remarkable and exciting extension of USC’s longstanding partnership with the U.S. Armed Forces,” Folt said. “Our agreement with the U.S. Space Force creates a new way for members of the Trojan community to serve our country and will leverage USC’s strengths in aerospace research and education to help build a diverse force of scientists and engineers who are focused on operating in new realm.”

The U.S. Space Force is the newest division of the Armed Forces, established by the National Defense Authorization Act in 2019 as a branch of the military focused on advancing and protecting U.S. and allied interests in space. Lt. Gen. Michael A. Guetlein, commander of Space Systems Command, attended Monday’s University Partnership Program ceremony on the University Park Campus on behalf of Vice Chief of Space Operations General David Thompson.

“We are delighted that the University of Southern California is now a part of USSF’s University Partnership Program,” Guetlein said. “In order to succeed in our mission, the U.S. Space Force needs a highly educated and diverse group of military and civilian guardians who have the technical expertise and problem-solving skills to develop, advance, and operate the world’s most advanced space systems today and into the future of our congested and contested space domain.”

The new partnership with USC will support the development of space-related research projects at USC, one of 14 Space Force university partners. The institutions working with the Space Force include the Georgia Institute of Technology, Howard University, Massachusetts Institute of Technology and Purdue University. The institutions were chosen based on their ROTC program strength, diversity and support for military veterans and their families, STEM degree programs and space-related research. 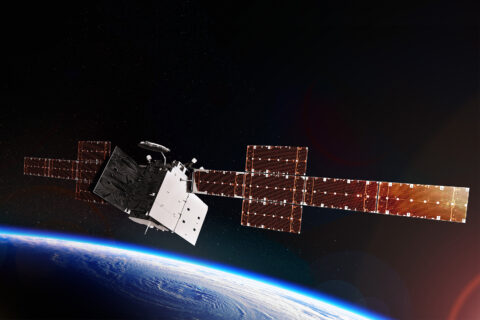 An artist’s rendering shows the Wideband Global SATCOM 11+ communications satellite to be operated by the United States Space Force. (Illustration/Boeing)

The memorandum of understanding is the first step in defining the partnership. The Space Force and USC will work to outline specific implementation milestones to meet the program’s goals.

A new division and a century-old alliance

The Space Force mission includes developing the force in collaboration with academia. The plan aims to recruit and develop diverse talent that “integrates and strengthens equity, development, and human dignity.”

“Our nation needs talented scientists and engineers in a variety of industries to develop new technologies and creative solutions for some daunting problems ahead,” Guetlein said. “Not every student who takes advantage of these higher education research and development opportunities will go on to serve in the military or become a government civilian, but with the knowledge and skills gained through this program, they will be positioned to serve our country in other ways.”

A longstanding bond with the military made USC a short-list candidate for the Space Force University Partnership Program. During World War I, USC served as a naval preparatory flight cadet school. That training program later evolved into the U.S. Air Force, which established a formal partnership with USC in 1949, though by then USC had been training officers for nearly 10 years. In 1953, USC launched the first aviation safety program at a major research university. As of today, USC has trained more than 4,600 officers.

The Space Force was founded two years ago — the newest military branch created since the Air Force in 1947. In part, the Space Force unifies existing Air Force, Army and Navy military missions in space. Although the Space Force is the smallest of the six branches of the Armed Forces, its critical mission includes the protection of American communication and navigation satellites along with the deterrence of conflict in space.

USC’s Air Force ROTC detachment began developing officers for the Air and Space forces during the fall 2020 semester. ROTC scholarships, a powerful draw for traditionally underrepresented groups, are just one component. Research is another.

Detachment 060 within the USC Department of Aerospace Studies under the USC Price School of Public Policy, has grown to its biggest cohort in three decades. The “Airmen of Troy” is now a diverse group of 93 cadets; almost half are women and more than two-thirds identify their ethnicity as that of a traditionally underrepresented group. More than 30% come from homes where a language other than English is spoken.

Our focus has been on quality in curating the ideal cadet mentoring, learning and training culture. … It’s paying off.

“Our focus has been on quality in curating the ideal cadet mentoring, learning and training culture. We feel that our focus on quality has quantity component built in,” said detachment commander Lt. Col. Reid Wynans. “It’s paying off.”

With more than a 1,000 student veterans enrolled, USC’s extensive military and veterans initiatives include extensive financial aid, with university contributions toward Yellow Ribbon scholarships exceeding $3 million annually. USC also offers dedicated student veteran housing, certificate programs and the Master of Business for Veterans degree at the USC Marshall School of Business. USC’s Center for Innovation and Research on Veterans and Military Families at the USC Suzanne Dworak-Peck School of Social Work is dedicated to the health and well-being of active-duty military, veterans and their families. USC Viterbi’s Astronautical Engineering Department is the only institution outside of the U.S. military academies to offer degrees in astronautical engineering.

The USC Marshall School of Business has launched the Master of Business for Veterans (MBV), a new degree program for veterans.

As president and vice president of the USC Veterans Association, Johnny Walker and Seulki Noh make a powerful pair.

At the university’s annual Veterans and ROTC Gala, retired Chief Master Sergeant of the Air Force Kaleth O. Wright breaks down his steps for success.