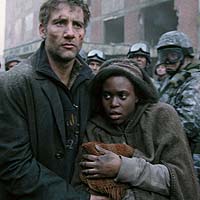 The author of “Children of Men” and the screenwriters of the film based on the book have won the 19th annual USC Libraries Scripter Award.

The Scripter is awarded annually by the USC Libraries to honor writers for the best achievement in adaptation among English-language films released during the previous year and based on a book, novella or short story.

The selection committee, led by screenwriter, novelist and USC School of Cinematic Arts Writing Division Chair Howard A. Rodman, chose “Children of Men” from a field of 45 eligible films released in 2006. The other four finalists competing in the last round of voting were “The Devil Wears Prada,” “The Illusionist,” “The Last King of Scotland” and “Notes on a Scandal.” Rodman announced the winners on behalf of the selection committee and the Friends of the USC Libraries, which sponsors the award.

“This year’s five nominated films were, all of them, heartfelt and elegantly wrought,” Rodman said. “In that heady company, ‘Children of Men’ was first among equals. Messrs. Cuaron, Sexton, Arata, Fergus and Ostby took P.D. James’ bracingly dystopic novel and crafted from it a film at once brave, subtle, shocking. This is writing and screenwriting of the highest order.”

Author James, 86, so far has published 19 books in her long career as a writer, member of the British Civil Service and magistrate. Other credits for the screenwriters include “Y tu mamá tambien” (Cuaron); “Live From Baghdad” (Sexton); “Spy Game” (Arata); and the upcoming “Iron Man” (Fergus and Ostby).

Universal Pictures distributes “Children of Men,” and Vintage published a reprint paperback edition of the book in May 2006.

The black-tie Scripter gala honoring the winning collaboration will be held on Sunday, Feb. 18, in USC’s Doheny Memorial Library. Henry Winkler will make his third appearance as emcee, with Hal Kanter returning as grand emcee for the seventh time.