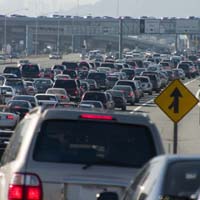 Children who live near a major highway are not only more likely to develop asthma or other respiratory diseases, but their lung development may also be stunted.

According to a study that will appear in the Feb. 17 issue of The Lancet and is now available online, researchers at the Keck School of Medicine of USC found that children who lived within 500 meters of a freeway, or approximately a third of a mile, since age 10 had substantial deficits in lung function by the age of 18 years, compared to children living at least 1,500 meters, or approximately one mile, away.

“Someone suffering a pollution-related deficit in lung function as a child will probably have less than healthy lungs all of his or her life,” said lead author W. James Gauderman, associate professor of preventive medicine at the Keck School of Medicine. “And poor lung function in later adult life is known to be a major risk factor for respiratory and cardiovascular diseases.”

The report draws upon data from the Children’s Health Study, a longitudinal document of respiratory health among children in 12 Southern California communities. More than 3,600 children around the age of 10 were evaluated over a period of eight years, through high school graduation. Lung function tests were taken during annual school visits, and the study team determined how far each child lived from freeways and other major roads.

“Otherwise-healthy children who were non-asthmatic and non-smokers also experienced a significant decrease in lung function from traffic pollution,” Gauderman said. “This suggests that all children, not just susceptible subgroups, are potentially affected by traffic exposure.”

Lung function was assessed by measuring how much air a person can exhale after taking a deep breath and how quickly that air can be exhaled. Children’s lung function develops rapidly during adolescence until they reach their late teens or early 20s. A deficit in lung development during childhood is likely to translate into reduced function for the remainder of life.

“This study shows there are health effects from childhood exposure to traffic exhaust that can last a lifetime,” said David A. Schwartz, director of the National Institute of Environmental Health Sciences. “The [institute] is committed to supporting research to understand the relationship between environmental exposures and diseases, and to identify ways to reduce harmful exposures to all populations, especially children so they can realize their full potential for healthy and productive lives.”

Previous studies have demonstrated links between lung function growth and regional air quality. The findings in this study add to that result, demonstrating that both regional air pollution and local exposure to traffic pollution affect lung development.

“This study provides further proof that regional air quality regulations may need to be adjusted based on local factors, including traffic volume,” Gauderman said. “This is important because in areas where the population continues to grow, more and more children are living or attending school near busy roadways. This may be harmful in the long run.”

Gauderman added that community leaders, school districts and developers should consider these results when developing new schools or homes.

Living Near Highways Can Stunt Lungs