Joseph Medicine Crow had a knack for making history.

He was the first member of the Apsáalooke (Crow) to earn a master’s degree. He became the tribe’s last war chief in recognition of heroic actions while fighting for the U.S. Army during World War II. Medicine Crow was a tribal historian for the Apsáalooke (Crow) Nation for more than 50 years, publishing seminal and influential works about Native American history and culture.

So, it’s fitting that the late USC alumnus now has a prominent and lasting place in his alma mater’s history after university leaders announced the naming of the Dr. Joseph Medicine Crow Center for International and Public Affairs. Medicine Crow completed his master’s degree in anthropology while on scholarship at USC in 1939 and received an honorary doctorate in 2003 — one of four honorary doctorates awarded throughout his life. He died in April 2016 at age 102.

Naming the building — and establishing a scholarship program — in his honor pays tribute to his life and legacy and ensures future generations of students have the opportunity to learn his remarkable story.

A scholarship made it possible for Medicine Crow to attend USC as a graduate student. USC President Carol L. Folt plans to pay his legacy forward with a scholarship program for Native American students in his name that represents the principles echoed in this recognition today.

“Dr. Joseph Medicine Crow was an ambassador and bridge builder who used education to create intercultural understanding and promote collaboration between peoples and communities,” Folt said. “Likewise, this building is an important nexus of interdisciplinary study that unites people across differences. Naming the building — and establishing a scholarship program — in his honor pays tribute to his life and legacy and ensures future generations of students have the opportunity to learn his remarkable story.”

Located in the heart of the University Park Campus, the historic building has been home to programs in anthropology, art history, international relations, political science, globalization and applied social sciences. Its tower bears one of USC’s most visible landmarks, the stylized globe. 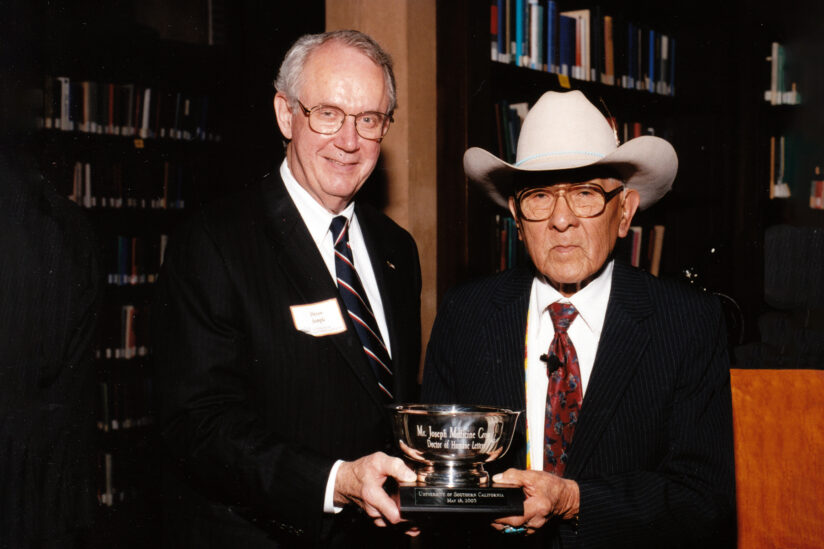 After Folt recommended to the USC Board of Trustees that it approve the renaming of this building in June 2020, she appointed a naming committee for the Center for International and Public Affairs. The committee was charged with identifying an alum who reflected USC’s values, significantly influenced the university and its mission, and established a lasting legacy of leadership. After surveying the USC community for potential names, the committee sorted through more than 200 suggestions and recommended Medicine Crow to be honored as the building’s namesake. USC has received the blessing of Medicine Crow’s family to name the building after their father, grandfather and great-grandfather.

“This building serves as a crossroads for different cultures and communities from around the world, and it is a gathering place for our students,” Folt said. “We wanted to rename it for an individual who embodies the qualities we strive for at USC, and when we asked the university community to nominate people for this honor, the selection of this beloved and inspiring figure — one of our most cherished alumni — became clear. I know the USC community will welcome this name with the enthusiasm and joy it deserves.”

Born in October 1913 on the Crow Reservation in Montana, Medicine Crow grew up under the tutelage of his grandparents as part of the Whistling Water clan. Stories from his childhood recount how his grandfather Yellowtail trained him to be a warrior, combining physical stamina and immersion in the tribe’s cultural traditions and immense history as told by elders.

From eighth grade through his first two years of college, Medicine Crow attended Bacone College in Oklahoma. He became a star pitcher for the baseball team and completed his associate degree there in 1936. He then pursued his degree in sociology and psychology at Linfield College in Oregon.

In 1938, Medicine Crow came to USC on scholarship and earned his master’s in anthropology in 1939. His thesis, “The Effects of European Culture Contacts Upon The Economic, Social and Religious Life of the Crow Indians,” was the seminal scholarly work on the topic. He wrote his people’s history and cultural traditions into American history books.

We have been inspired by his passion for storytelling, as well as his service and love for our country. He will serve as a foundational role model for our Trojan community.

By the early 1940s, Medicine Crow had completed his coursework toward a doctorate at USC when he was called to serve in World War II. While serving in the U.S. Army’s 103rd Infantry Division, he completed four feats necessary to be named the last Apsáalooke (Crow) war chief: touching an enemy soldier, disarming an enemy soldier, leading a successful war party and capturing an enemy’s horse. He is credited with capturing 50 horses from a Nazi SS camp, along with engaging in hand-to-hand combat with a German soldier whose life he ultimately spared.

“On behalf of the Board of Trustees, it’s my honor and pleasure to officially recognize the importance of Dr. Medicine Crow’s legacy in our university’s history,” said Rick Caruso, chair of the USC Board of Trustees. “Since learning of his incredible life, we have been inspired by his passion for storytelling, as well as his service and love for our country. He will serve as a foundational role model for our Trojan community.”

When Barack Obama became president, Medicine Crow told him: “When you move into the White House, I’m going to come there and sing an honor song.”

In August 2009, he did just that after Obama honored Medicine Crow with the nation’s highest civilian honor, the Presidential Medal of Freedom, in recognition of his military service and contributions to Native American history. For his military deeds, he also received the French Legion of Honor Chevalier medal and the Bronze Star.

After World War II, Medicine Crow became tribal historian for the Apsáalooke (Crow) Tribal Council and documented his people’s traditions and daily life. He was widely recognized as the last person to have heard accounts of the Battle of Little Bighorn directly from participants in the 1876 conflict. A gifted storyteller, he was revered as one of the most important carriers of his people’s oral history.

Medicine Crow wrote several books on Apsáalooke (Crow) history, including his first, From the Heart of the Crow Country, The Crow Indian’s Own Stories, published in 1992 when he was 72. He also taught in the Department of Crow Studies at Montana’s Little Big Horn College and performed the opening song for the United Nations summit conference for spiritual and religious leaders in 2000. Reflecting his lifelong commitment to education, Medicine Crow Middle School in Billings, Mont., was named after him.

‘There is a middle line that joins two worlds together. … I walk that line.’ – Joseph Medicine Crow

As an extraordinary and pragmatic healer in a world of fracture, Medicine Crow is a model for USC as it begins the important work of establishing corrective, redemptive and restorative relationships with local Indigenous communities, on and off campus.

Joseph Medicine Crow MA ’39, who received an honorary doctor of humane letters from USC in 2003, was awarded the nation’s highest civilian honor, the Presidential Medal of Freedom, on Aug. 12.

Even though her USC journey has just begun, Natalie Battiest already understands the value of embracing her heritage.