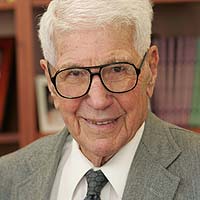 The $6 million donation from USC alum Levan is the first major gift supporting the provost’s arts and humanities initiative.

Norman Levan, a Trojan alumnus, professor emeritus and former chief of dermatology at the Keck School of Medicine of USC, has given $6 million to his alma mater. His contribution � the first major gift supporting USC’s arts and humanities initiative � will create the USC Norman Levan Institute for Humanities and Ethics.

“The USC Levan Institute for Humanities and Ethics will issue a ‘grand challenge’ to every new USC student: to engage with, understand and be informed by the timeless values at the core of our humanity,” said Provost C. L. Max Nikias. “We are extremely grateful to Dr. Levan for his vision and generosity.”

The institute also will sponsor arts and cultural events, including musical, dance and theatrical performances as well as art exhibitions, film screenings and poetry readings. These activities will engage all USC students � from incoming freshmen to newly arriving graduate students, medical students and postdoctoral fellows � with a broad range of expressions of the humanities and a particular focus on ethics and values.

“The institute will actively design, sponsor, organize and present programming that will appeal to students from every background and discipline,” Nikias said. “In a high-tech, consumer society, what does abundance mean? What does success mean? What is of lasting value in our rapidly changing world? The Levan Institute will raise fundamental questions that face every person, regardless of his or her discipline or path in life.”

For Levan � whose enthusiasm, twinkling eyes and ready laugh belie his 90 years � these questions hit close to home.

Although he ultimately entered medical school, Levan initially enrolled as an English major at USC. After earning his M.D., he went on to serve in the Army Medical Corps before opening a private practice and returning to the university as a voluntary member of the medical faculty. In 1961, he became the first chair of USC’s department of dermatology � a post he would hold for two decades.

“I found considerable freedom to indulge my longtime interest in the humanities,” Levan said about his tenure at the university. In the pediatric dermatology program, for example, he brought in visitors representing imaginative literature, cultural anthropology, astronomy and many other fields to talk with patients, residents and house officers.

Together with religion professor J. Wesley Robb, he helped create USC’s first classes in bioethics � an effort that ultimately led to required ethics classes for medical students at the university. Levan also participated in a course called “Introduction to Clinical Medicine,” in which students were assigned to an inpatient and subsequently met with a team of instructors to discuss what they had observed. “We would ask the students: ‘Tell us, what did you see? How was he groomed? How did he introduce himself?’ It was a holistic approach to patient care,” Levan said.

In reflecting on his 71-year relationship with USC, Levan is frequently reminded of a discussion group formed by Peter Lee, Robert Maronde, Helen Martin and several other university faculty nearly half a century ago. Members of the group � who still meet on a monthly basis � discuss topics ranging from flag burning to the current month’s selection of George Eliot’s novel Middlemarch.

Over the years, the group has provided an effective sounding board for reflection about members’ professional as well as personal lives.

In many ways, the Levan Institute for Humanities and Ethics will serve a similar function for new students at USC, providing a forum in which they can explore different modes of thinking and responding to the world. “I see no advantage for professional people to load themselves up with sciences,” Levan said. “My feelings are that you can’t be truly educated by concentrating solely on your trade school or professional training.”