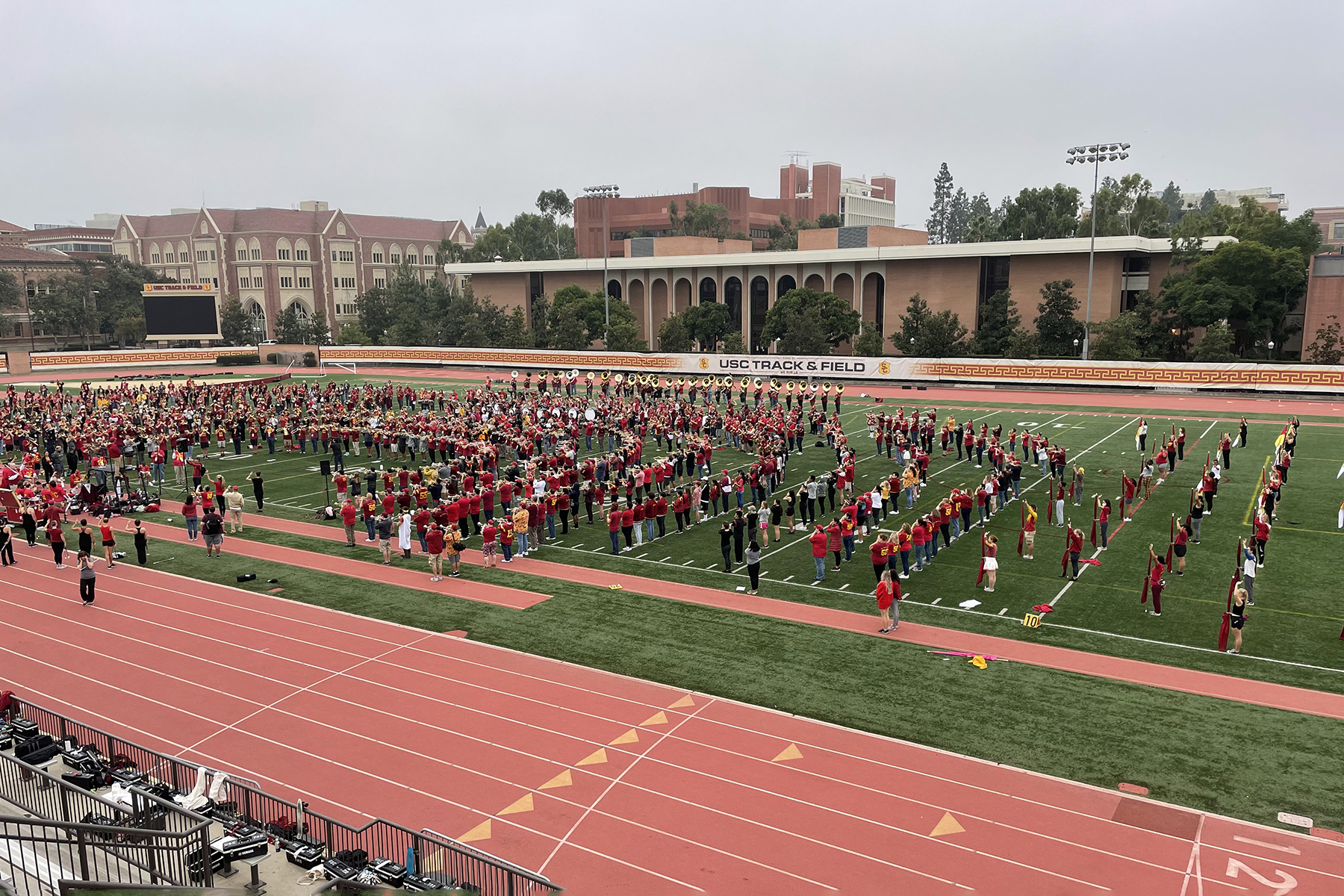 This one time, at band camp, a bunch of USC students stepped onto a football field together for the first time with no idea what they were signing up for.

My time came in 1986, and that moment changed my life, as it has for so many other band members over the years. Now, some 35 years later, I’ve returned to that familiar place with more than 900 other USC Trojan Marching Band alumni to celebrate Homecoming and fete the man who spent 50 years building the program. 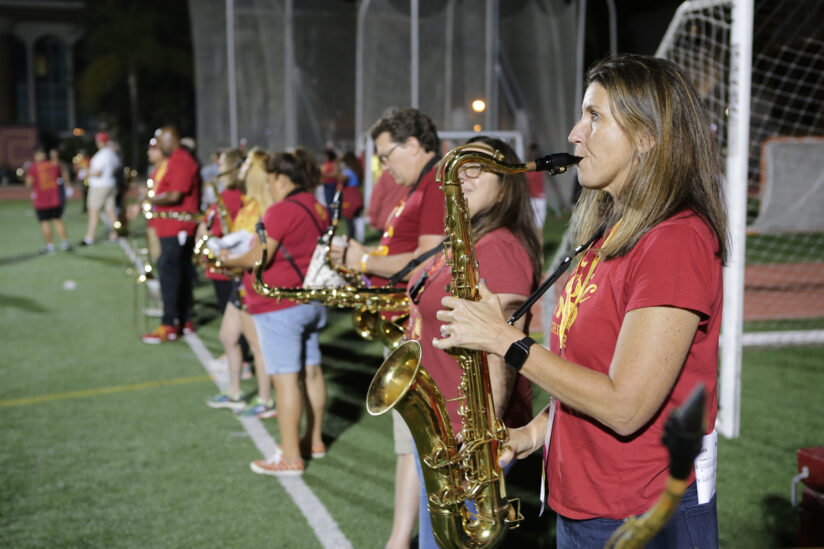 That’s how I feel as I show up for alumni band rehearsal on a cool, moist Friday night. Band alumni pack Cromwell Field. It’s wall-to-wall hugging, smiling and laughing. There are a lot of familiar faces that I see every year during tailgates and football games. But the people I haven’t seen in 30-plus years bring me the most joy.

The freshman who only marched for a couple seasons and then decided to focus on academics now has a PhD and is a professor at Azusa Pacific University. The old member who came back in 1988 to help fill an open spot for the Rose Bowl is also here, and we once again shower her with shouts of “Dinosaur!” with as much of a reverential undertone as one can manage at 95 decibels. She becomes an important part of our reunion weekend — even though our entire shared experience 30 years ago lasted about a week. 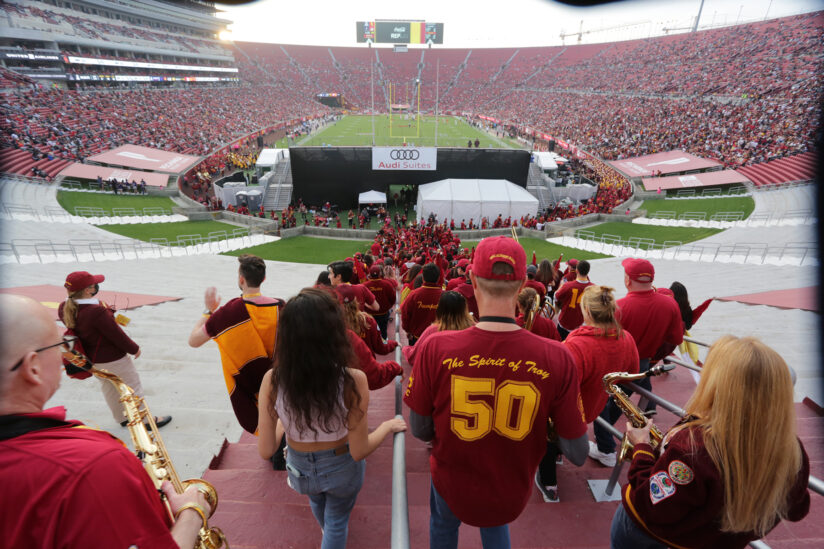 The other relationship that was rekindled was with my instrument. In the last 25 years, I’ve picked up my tenor sax no more than a handful of times, and I have performed only once. But it still feels familiar. The cold brass of the instrument and the taste of the reed haven’t changed. Neither has the weight of the instrument around my neck.

My musical chops aren’t what they once were, but the music still exists in muscle memory. As soon as I find a couple notes that work, everything else falls into place around it. (And it’s good that memory didn’t fail, because it’s hard to read the music with progressive lenses.)

But that’s beside the point. This Homecoming celebration for the Trojan Marching Band alumni is about friendships forged years ago. For one brief weekend, we’re all back in the band and all friends again. The cast of characters who played such a prominent role in my college experience are all the same, though a little grayer and a bit more wrinkled.

Band members head toward the field and their moment in the spotlight. (Photo/Christian Gunning)

We spend the night trying to decipher the drill chart, which is a confusing stack of paper with more than 1,000 numbered symbols that maps out where everyone is supposed to be on the field and how to get there. It still involves the same chaos it always did. “Are we here?” “We’re going where?” “You can’t do that in an 8-count pinwheel.” It never makes sense at first, until finally the pieces fall into place, and still there’s always one squad that is completely clueless and standing in the wrong spot.

At rehearsal, we all fall into familiar roles. As a squad leader, I try to decipher the drill chart and convince my four-member squad to get to the right place, in the right number of counts, facing the right direction. It usually involves a lot of yelling. One minute, we’re just trying to remember how to play the music, and then we’re learning a dance routine that has to be performed while playing that music. 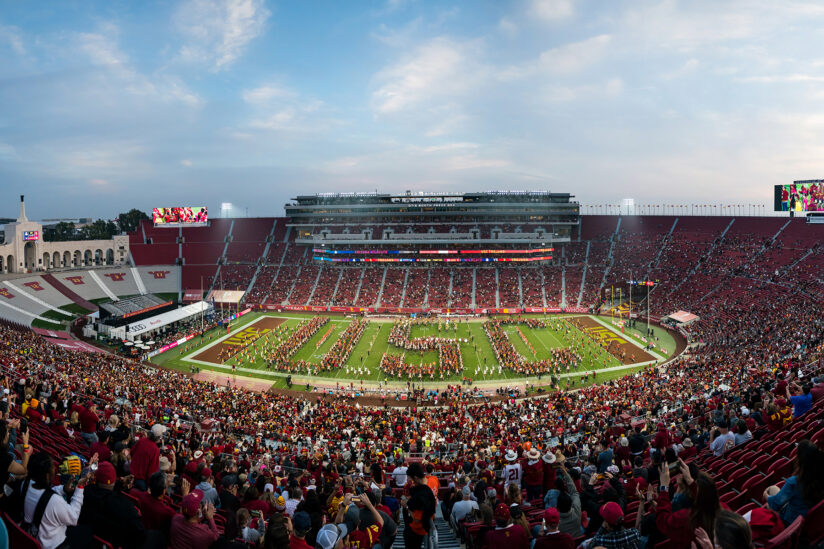 After practice ends we head to the bar for a beer — just like old times — except now we’re talking about kids and jobs. There’s a lot of reminiscing, too. Those band road trips to Chicago, San Francisco, Arizona and Australia — each memory was a lifetime ago, and yet it seems like just yesterday.

Saturday morning, we practice some more, and all the doubts from the previous evening that the show would come together are replaced by the knowledge that we know how to get this done. More than 900 alumni march to the Los Angeles Memorial Coliseum creating a dense sea of cardinal shirts that stretches almost as far as one can see. We prepare to “take the field” once again during halftime at the USC-Arizona football game.

The halftime show was built around the band’s historic pre-game show: “Fanfare,” “Tribute to Troy,” “Fight On,” a rock chart hit (“Tusk,” in this case) and “Conquest.” Band members play these songs thousands of times during their tenure, which helps explain why they’re still engraved in our brains and fingers, even for those of us who didn’t practice in advance.

A grand finale at the Trojan Marching Band reunion performance

The halftime show serves as the grand finale for Arthur C. Bartner, the director who spent 50 years building the country’s iconic college marching band. So for this performance, the university’s alma mater — “All Hail” — was added to give Bartner one last chance to direct the band. 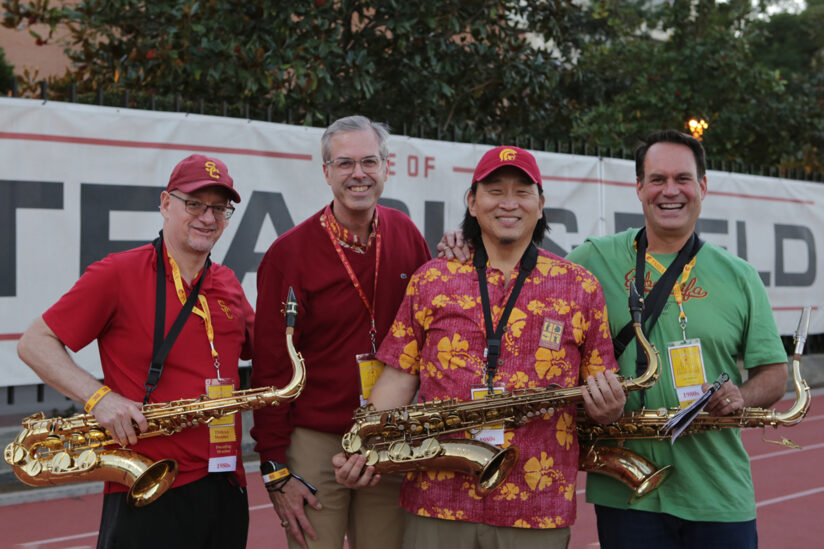 We take our place on the hallowed ground of the Coliseum field, give it our all, and once again bask in the glow of overhead lights and a cheering crowd. Hours of practice come down to about 11 minutes on the field. The joy of putting on a show overshadows a few wrong notes or being in the wrong place on the field. Playing one last time under Bartner’s direction is pretty emotional, as well, and many band members struggle to hold back tears. It turns out it’s emotional for someone else, too.

I run into Bartner, himself, outside Tunnel 24 early in the fourth quarter. We talk about how good it is to see everyone return. He asks if I marched. And for the first time since stepping off the Rose Bowl field in January 1990, I could say yes. He reinforces that so much of his years with the band was about the bonds forged on the field. Everyone worked together to have fun, but when it came time to get serious, the band always knew when to step up.

“You guys like to cut up, but you don’t mess with the Alma Mater. That’s right here,” he says, as he pats his chest over his heart. And with just a few words, I hear how much that song means to him.

And this weekend means so much to us as band alumni. For 50 years, thousands of students stepped onto the field at band camp and became part of something truly special and unique — the Art Bartner era. For one day, many of us returned to show how much we appreciated him and discovered how much he had given us in return.

Trojan traditions serve as a fitting return to normalcy

USC’s many traditions have always been special to Trojans — perhaps never more so than after an absence of a year and a half.

He led the band at two Rose Bowls and the premiere of the movie Grease. You can still see him in the “Tusk” music video. Four decades later, Rodney Davis remains beloved at USC.