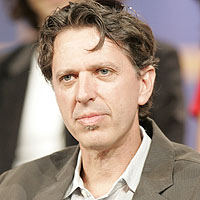 Kring broke traditional TV rules to get his drama on the air last fall.

In an era when network economics are skewing prime-time fare toward reality shows and infotainment programming, launching a big-budget, large-cast, theatrical-quality series would seem to be a super-heroic feat.

But like the individuals he’s created for NBC’s Heroes, series creator and USC alum Tim Kring draws his power from the basics: great characters, solid stories and a clockwork production schedule.

Kring, who majored in production as a member of the class of ’83, came up with the idea for the program after watching Eternal Sunshine of the Spotless Mind and The Incredibles back-to-back in 2004. The former concerns a “normal” person coming to terms with a surreal world. The latter depicts a family with superhuman powers trying to live “normal” lives.

“I liked the idea of starting from the perspective of people who were really unexpected and really ordinary,” Kring told students who packed Frank Sinatra Hall on Feb. 5 for Howard Rosenberg’s Television Symposium.

Strong characters and superpowers have played prominent roles in Kring’s career. His credits, which span two decades, range from Crossing Jordan and Providence to Misfits of Science and Knight Rider.

“This show was designed to be very big in terms of having an identity not just on the air but online and with DVDs and video games,” said Kring, who knew the concept ran against a tide of safe, economical programming. To counter this, he went into his pitch at NBC armed with a strategic plan that appealed to the network’s need to go beyond traditional TV fare.

Kring’s strategy worked, with NBC giving the green light in May 2006. His successful pitch, however, meant devising a new way of writing and producing the show to get it on the air by September. “The sheer size of what it is that we’re trying to do really forced a new model,” he said.

An example of going beyond the televised medium is the blog that Oka writes in the voice of his character Hiro Nakamura, a young office worker who discovers he has the power to alter time and teleport. Oka uses his posts to provide insight for the character and the evolution of the program.

“It’s a great way of filling in the blanks,” Oka said.

Hiring what Loeb referred to as the creative equivalent to the New York Yankees, Kring once again went against the convention of assigning individual episodes to specific writers. Instead, the entire team writes each episode together. Afterward, an individual writer will be in charge of stewarding the episode through the production process.

“It should have been the greatest disaster you could ever imagine. But very quickly we were inspired to help one another instead of competing with one another,” said Loeb, a renowned comic book writer as well as a scribe for the CW series Smallville.

Alexander, who has served as a producer on dozens of Alias episodes, said, “It’s an incredibly transformative thing for the business and for storytelling.”

Likewise, shooting and editing are also highly condensed, with multiple directors often filming sequences from different episodes on the same set on the same day.

Though they would not divulge upcoming plot points, the speakers were open to student questions that ran the gamut from marketing to special effects and creative control.

The team also offered personal advice, such as how to tap into the industry.

“I recommend that you as a writer crank stuff out and work on your relationships,” Alexander told the audience. “That’s one of the most important things. You’re all going to rise up in the business together, and you can all give each other work.”

Meet the Super Powers Behind Heroes