The political schism in America has narrowed only slightly since the 2020 U.S. presidential election, according to a new measure for polarization from the USC Annenberg School for Communication and Journalism. It was developed in collaboration with PR firm Golin and narrative intelligence company Zignal Labs.

And while news about COVID-19 vaccines dominates the national media, immigration is the top issue contributing to the current high level of polarization. Social media discussion around that topic has grown significantly more contentious since last year’s presidential election, largely driven by engagement with right-leaning media featuring a high level of unreliable information.

Officially released Thursday, Polarization Index (P.I.) is the first-ever data science-based index that tracks national political division as measured within social media conversations. Leveraging Zignal’s real-time natural language processing capabilities, the P.I. mathematically calculates the degree of discord overall and across 10 key issues. It is designed to help C-suite executives better understand public opinion and inform their corporate strategies, including whether to take a stand on controversial topics that may impact customers, employees and shareholders.

Polarization has become a permanent fixture in American culture.

“It’s clear from our analysis that polarization has become a permanent fixture in American culture, fueled in part by partisan communicators in media and politics who benefit from conflict,” said Fred Cook, director of the USC Center for Public Relations at USC Annenberg.

“These opposing political forces are using the issue of immigration as the foundation for building a wall to divide our country.”

The Polarization Index calculates a numerical rating (on a scale of 1 to 100+) for the level of disunity in America based on the volume of engagement with relevant news stories shared on social media from a broad spectrum of media. When data analysis began 12 months ago, the overall measure of polarization in the U.S. reached a critical level of 85.1 — primarily due to major disputes over voting integrity, which led to the Jan. 6 events at the Capitol. When Biden took office in the first quarter of 2021, the overall polarization level dropped 3.3 points to 81.8, as the voting integrity issue cooled. In the second and third quarters, however, the P.I. score crept up again, to 82.5, due to increases related to immigration and policing policy.

“Polarization is a complex, dynamic and widespread phenomenon of huge import for CEOs who increasingly find their companies embroiled in whether to take a stance,” said Guy Churchward, CEO of Zignal Labs. “Using real-time technology, we can quantify the degree of polarization of given narratives, track this over time and provide a framework for business and government leaders, as well as the media itself, to assess the dangers and opportunities that these topics pose.” 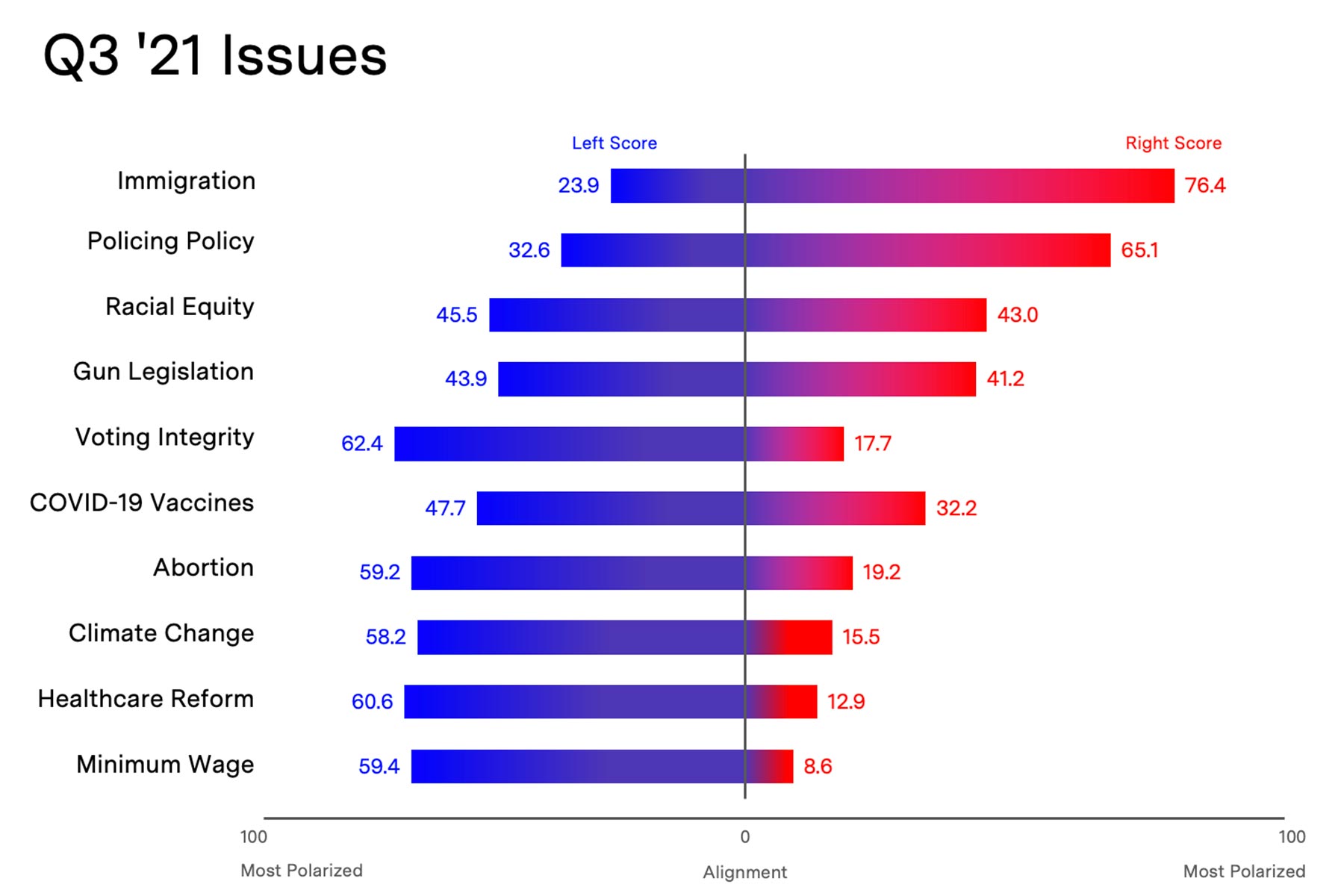 The Polarization Index calculates a numerical rating (on a scale of 1 to 100+) for the level of disunity in America based on the volume of engagement with relevant news stories shared on social media from a broad spectrum of media. (USC Graphic)

Zignal’s proprietary algorithms analyzed 60 million social media posts over the course of the past 12 months to gauge the level of engagement with media rated for their political bias and reliability by Ad Fontes Media, an independent news content rating company. By combining engagement data with Ad Fontes’ bias and reliability ratings, the Polarization Index can reveal which side of the political spectrum is driving an issue, and point out how much unreliable information is being shared.

In the past three months, policing policy, racial equity and gun legislation rank second, third and fourth respectively on the Polarization Index. While engagement was largely driven by the right among discussion of policing policy, social media users on the left and right contributed in roughly equal numbers to the discord on racial equity and gun legislation, indicating they will remain critically polarized for the foreseeable future — with the potential to become more volatile if triggered by another violent incident.

“When we look at polarization as a quantified entity, we see how powerful echo chambers are being created and amplified, reinforcing existing opinions,” said Jonny Bentwood, global head of data and analytics at Golin. “By tracking these trends over time, we gain useful insights into how consumer perceptions evolve on issues that impact society and business.”

Previous research by the USC Center for Public Relations and Golin indicates that the majority of U.S. companies plan to speak out more frequently about social issues that are important to their employees and customers. To guide them through the minefield of controversies that may impact their reputation or their bottom line, issues management experts at Golin provide a risk assessment of each topic in the P.I. report.

Corporate America’s response to last summer’s racial justice protests and more recently to the new laws in Georgia and Texas is unprecedented.

“Corporate America’s response to last summer’s racial justice protests and more recently to the new laws in Georgia and Texas is unprecedented,” says Matt Neale, CEO of Golin. “As more CEOs raise their voices, the Polarization Index will help them evaluate the risks and rewards of participating in these contentious debates.”

The Polarization Index can be downloaded. Future updates will be released periodically.

About the USC Center for Public Relations: Based at the USC Annenberg School for Communication and Journalism, the USC Center for Public Relations connects corporations, agencies, academics and students to define the future of the industry and to develop those who will shape it. Signature initiatives include the Global Communication Report, USC Annenberg’s Kenneth Owler Smith Symposium and the Relevance Report. The center’s podcast series, #PRFuture, features interviews with professionals and advocates who are changing how the industry communicates. Follow CPR at @USCCenter4PR and #PRFuture. The center’s director, Fred Cook, is the former CEO and chairman of Golin and has a financial interest in the company.

About Zignal Labs: Zignal’s Narrative Intelligence Cloud analyzes billions of digital stories in real time to help customers discover and manage the narratives that can help or harm them. Used by the world’s largest companies and public sector organizations, Zignal’s natural language processing and machine learning algorithms identify risks and opportunities as they emerge, and provide insight into how to shape the narratives that matter. Zignal serves customers around the world, including Expedia, Synchrony, Prudential and The Public Good Projects. To learn more about Zignal Labs, please visit the company’s website.

About Golin: Golin is a global public relations agency that helps companies create change that matters. Golin’s 1,700 global employees operate across 50+ offices worldwide, allowing the firm to provide clients with comprehensive solutions for multi-market, regional and global communications programs. Golin was named PRWeek’s 2021, 2020 and 2019 Global Agency of the Year, PRovoke Media’s 2021 North America Large Agency of the Year, and is the first-ever PR agency to be credited with “ideation,” when the firm took home Gold and Silver Lions at the 2019 Cannes Lions Festival of Creativity. Disclosure: Fred Cook is the former CEO and chairman of Golin and has a financial interest in the company.