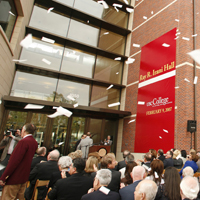 Amid a shower of cardinal and gold streamers and music from the Trojan Band, USC College christened its flagship life sciences building the Ray R. Irani Hall.

The building was dedicated in honor of USC Trustee and alumnus Ray R. Irani, who earned a Ph.D. in chemistry here in 1957.

In remarks at the Feb. 9 ceremony, USC President Steven B. Sample praised Irani for his stalwart support of the university and his many achievements as a scientist, businessman, leader and dedicated Trojan. Irani is chairman of the board, president and chief executive officer of Occidental Petroleum Corp.

“Over the past several years, Ray Irani has enhanced the university in many ways through his wise stewardship as a member of the USC Board of Trustees and his loyal support of our schools and programs,” Sample told the crowd of 200.

“By lending his name to his alma mater, he is sending a strong vote of confidence in the quality of the faculty, students and research programs at USC College, as well as ensuring that our faculty and students will pursue their work in a facility of incomparable quality.

“Thanks to people such as Ray Irani, USC will remain a key player in this golden age of the life and biological sciences.”

“I’m really overwhelmed,” Irani said, thanking his wife, Ghada, and other family and friends in attendance. “I have loved USC from the moment I first came here in 1953. USC helped launch me onto a successful career in science and business.

“I never imagined I would be standing here today on this great campus with a hall that bears my name. I am truly honored.”

Completed in 2005, Irani Hall, formerly known as the Molecular and Computational Biology Building, houses faculty, staff and students in the College department of biological sciences. Its occupants bring cutting-edge approaches to the fields of genomics, molecular biology, genetics, bioinformatics, biochemistry and evolution.

Irani was 18 when he arrived in Los Angeles from his home in Lebanon to begin graduate studies. His research has led to many scientific advances. He has published more than 50 technical papers and holds more than 150 patents.

After a decade as leader of the Olin Corp., Irani joined Occidental in 1983 and was named chairman and CEO in 1990.

USC College established the Ray R. Irani, Chairman of Occidental Petroleum, Chair in Chemistry with his help in 1995. He received the USC Alumni Association’s highest honor, the Asa V. Call Achievement Award, and the 2003 Distinguished Alumni Award from the chemistry department.

Peter Starr, dean of USC College, said: “It is altogether fitting to see the name of Ray Irani, who embodies the pursuit and achievement of excellence in so many arenas of life, on a building dedicated to the highest level of scientific achievement at the College.”