USC’s bench is deep and its scope is wide when it comes to research on Alzheimer’s disease.

In Paul Thompson’s lab, researchers query a vast trove of brain images and DNA from all over the world to glean insights that would be otherwise impossible to pinpoint. Judy Pa explores how exercise and cognitive training, assisted by virtual reality, might delay cognitive decline. J.C. Chen wants to know if the dirty air we breathe is stealing our memories.

USC’s federal funding for Alzheimer’s and related dementias hit $92 million in 2020, a reflection of the university’s position as one of the nation’s leading Alzheimer’s research centers. And that figure, documented in the National Institutes of Health’s most recent categorical spending report, is just a slice. It doesn’t include totals for active, multiyear grants, nor does it include innovative projects with funds from other sources such as the National Science Foundation or the Alzheimer’s Association. 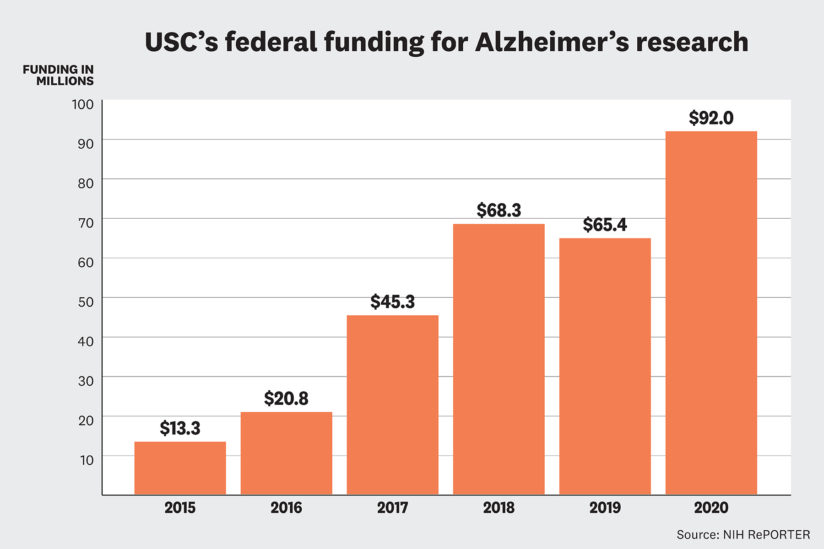 The growth in federal funding also demonstrates USC’s alignment with national research priorities. The NIH is the largest public funder of biomedical research in the world. In 2020, it distributed nearly $3 billion for projects devoted to the memory-robbing disease.

“More than one-third of our 2020 NIH Alzheimer’s funding supports USC’s work as a global research hub,” said Ishwar Puri, vice president of research at USC. “USC maintains and interrogates data gathered from patients throughout the world. We’ve created a nationwide clinical trial network and a method for thousands of potential clinical trial participants before they show symptoms.”

More than one-third of our 2020 NIH Alzheimer’s funding supports USC’s work as a global research hub.

For example, in 2020 the NIH awarded $31 million to Paul Aisen, director of the Alzheimer’s Therapeutic Research Institute, to continue coordinating a network of 35 clinical sites that will channel patients into clinical trials. The Alzheimer’s Clinical Trials Consortium is jointly led by Aisen, Reisa Sperling of Brigham and Women’s Hospital in Boston, and Ronald Petersen of the Mayo Clinic in Rochester, Minn.

In addition, the funding supports the institute’s recruitment of potential study participants 10 to 20 years before symptoms appear with a free online memory test that participants take from home every three months.

• Jinkook Lee, who is studying the interplay between genes in lifestyle in the onset and progress of cognitive aging. Her work is set in India, where an estimated 4.1 million people have dementia. Lee is a research professor of economics at the USC Dornsife College of Letters, Arts and Sciences and a senior economist at the college’s Center for Economic and Social Research.

• Thompson, who leads an initiative called Artificial Intelligence for Alzheimer’s Disease, or AI4AD. The international effort performs large-scale brain scans and genetic studies. Thompson also won a prestigious Zenith Fellows Award from the Alzheimer’s Association in 2020 to launch a global brain aging study across 35 countries. Thompson is a professor of ophthalmology, neurology, psychiatry and the behavioral sciences, radiology, psychiatry and engineering at the Keck School of Medicine of USC and associate director of the USC Mark and Mary Stevens Neuroimaging and Informatics Institute.

• Pa, whose work involves having subjects engage in physical exercise while performing cognitive exercises using virtual reality. Pa is an associate professor at the Mark and Mary Stevens Neuroimaging and Informatics Institute in the Keck School of Medicine and the Department of Neurology.

• Carol Prescott, who studies how higher education is associated with preserved cognitive performance in older age and reduced risk for Alzheimer’s disease and other dementias. Possible explanations include direct protective effects of more education and preserved capacity or enhanced functioning due to greater cognitive complexity of occupational and leisure activities among people with more education. Prescott is a professor of psychology and gerontology at USC Dornsife.

Toga, professor of ophthalmology, neurology, psychiatry and the behavioral sciences, radiology, psychiatry and engineering at the Keck School of Medicine and director of the Laboratory of Neuro Imaging and the USC Mark and Mary Stevens Neuroimaging and Informatics Institute, notes that USC’s broad commitment has resulted in a powerhouse in Alzheimer’s disease research, leading in many areas.

“In combination, our research programs in clinical trials, molecular and cellular research along with systems and imaging comprise a comprehensive and balanced effort,” Toga said. “Together, these programs will enable discoveries and cures for this devastating disease. It is truly an exciting time.”

Fine particle pollution may be one reason why Black women have double the risk of developing Alzheimer’s than white women, new research from the Keck School of Medicine of USC suggests.

A newly approved yet controversial drug, in particular, brings both hope and challenges for patients and clinicians.

A new USC study may have unlocked therapy options to slow cognitive impairment in people with the APOE4 gene, which has long been associated with Alzheimer’s disease.