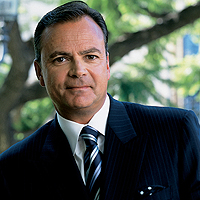 Business leader Caruso has been named Developer of the Year by the Los Angeles Business Journal.

Rick J. Caruso, founder and chief executive officer of Caruso Affiliated, has been elected to the USC Board of Trustees.

A high-profile developer of open-air malls, Caruso Affiliated has built its reputation on creating neighborhood and regional retail centers of extraordinary quality. The company’s portfolio comprises more than 35 properties nationwide, with a particularly strong presence in Southern California through projects such as The Grove in Los Angeles’ Fairfax district and The Americana at Brand, currently under construction in Glendale and slated for opening in spring 2008.

“Rick Caruso embodies so many of the values that USC cherishes: an entrepreneurial spirit, drive, a passionate desire to make a difference and a commitment to the vitality of Los Angeles and the wider community,” said USC President Steven B. Sample. “Add to these qualities his enthusiasm for and allegiance to USC’s mission, and you can understand how delighted we are that he has agreed to serve on the USC Board of Trustees.”

Caruso is a second-generation Trojan � his father, Dollar Rent-a-Car founder Henry J. Caruso, also attended USC. The younger Caruso graduated from the USC Marshall School of Business in 1980. He formed Caruso Affiliated as a part-time venture that same year and went on to earn a J.D. from Pepperdine University in 1983. In 1990, after six years in corporate securities law, he decided to devote his energies to his company full-time.

Since his student years, Caruso has stayed involved with the life of USC. He has served on the USC School of Policy, Planning, and Development’s board of councilors since 1989, and in fall 2006, he and his wife Tina pledged $6 million to help fund construction of the new USC Catholic Community Center and church.

Likewise, Caruso’s ties to his native Los Angeles run wide and deep. At age 25, he became the youngest commissioner in the city of Los Angeles for the Department of Water and Power, and he was president of the Los Angeles Police Commission from 2001 to 2005.

A sought-after speaker, Caruso has lectured at Harvard University’s Kennedy School of Public Administration as well as the USC School of Policy, Planning, and Development. He is a frequent presenter at the USC Lusk Center for Real Estate and an active member of the Urban Land Institute and the International Council of Shopping Centers.

In 2006, public television station KCET honored Caruso and his wife with its Visionary Award recognizing them as “visionary leaders dedicated to positive change in Southern California through philanthropic, business and civic leadership.”

The Carusos, who have three sons and one daughter, own homes in Brentwood and Newport Beach.