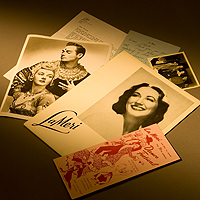 Items from the collection showcasing the story of La Meri, a master of traditional dances performed around the world.

A recent acquisition by the USC Libraries allows performers and students of theater and dance to explore the history of one of the 20th century’s most influential dancers.

The collection � part of the larger Charles James Miller archive � showcases the life and artistry of Russell Meriwether Hughes, named after her father and popularly known as La Meri or the Queen of Ethnic Dance, who mastered traditional dances from around the world.

“USC is truly an appropriate site to house the works of this extraordinary artist,” said Margo Apostolos, associate professor and director of dance in the USC School of Theatre. “La Meri left an international legacy on the universality of dance. Her teachings and performances brought dance to people throughout the world.”

Capturing the essence of the movements of Japanese geishas, the court dancers of Java and the dances of India and Morocco that were exotic to Western audiences at the time, La Meri was a theatrical chameleon. Her pursuit of the world’s diverse styles of dance led from her Kentucky birthplace to performances and study across Europe, Africa and Asia as well as the Americas.

A contemporary critic, describing La Meri as the first Western dancer to be acclaimed in India for her mastery of Indian styles, wrote “one must accept the theory of reincarnation in order to explain this perfect reproduction of our traditional dances by a Westerner.”

Among the archive’s contents are professional and candid photographs, news clippings and reviews, ephemera related to La Meri’s performances throughout the world, and original watercolor and charcoal portraits of the dancer drawn by USC alumnus Charles James Miller, La Meri’s one-time paramour and an accomplished dancer in his own right. The collection also contains more than 100 personal letters � composed from the mid-1940s until her death in 1988 � between La Meri and Miller.

The outbreak of World War II interrupted La Meri’s travels. After returning to the United States, she founded the School of Natya in 1940 with Ruth St. Denis. It is there that La Meri met Miller, then a dance student. The two remained close and corresponded faithfully for the next 40 years.

“It is thanks to Miller’s foresight in saving not only his letters from La Meri but also the ‘carbons’ of his letters to her that we are able to observe the monthly � sometimes weekly and daily � dialogues between these two individuals,” said USC Libraries archivist Jacqueline Morin.

The collection also has a regional Southern California connection, Morin said. “Most of the correspondence between Miller and La Meri is from the 1960s and 1970s when La Meri was living in Cape Cod � but still teaching and performing in New York, among other places � and Miller was in Los Angeles,” she added.

Apostolos believes that the archive will be of great value to USC scholars across many disciplines. “Particularly students and scholars investigating the effect of dance on various cultures, including Spain and India, will want to use the collection in their research,” she said.