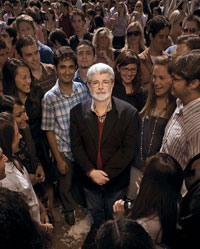 Star Wars creator George Lucas ’66 leads USC student filmmakers on a new adventure, marshaling the force of his Lucasfilm Foundation to reimagine the idea of a film school.

If the word “cinematic” conjures up thoughts of dark movie theaters redolent of buttered popcorn, you’d better brace for a shock. With last fall’s unveiling of the USC School of Cinematic Arts, the concept has careened off the silver screen into virtually every aspect of modern life � embedding itself into the very idea of movement.

That’s precisely what George Lucas ’66 had in mind with the Lucasfilm Foundation’s unprecedented $175 million donation to rename, rebuild and help endow USC’s erstwhile School of Cinema-Television. The largest-ever gift in USC’s history isn’t about vanity � Lucas’ name is conspicuously absent from the school’s new moniker. Rather it’s about a paradigm shift � deep, substantive and forward-looking � already sending shock waves through entertainment and education alike.

“We have arrived at a historic juncture,” Elizabeth M. Daley, the school’s dean, told the crowd of 1,100 alumni, students, faculty and friends who had gathered for an October 4 ceremony marking the official name change. The event also marked a physical change: the groundbreaking for a 137,000-square-foot structure where the “cinematic” future will unfold. To understand how and why, one must step back a bit.

In the early days of mass entertainment, cinema meant just one thing: movies. For the first half of the 20th century, films dominated the audio and visual arts, and with its founding in 1929, USC’s cinema program helped define and develop the technologies driving them. In the late 1940s, another revolutionary technology � television � took center stage, dramatically altering the art form and industry once again. When it became a freestanding academic unit in 1983, the School of Cinema-Television’s name reflected this shift.

In the past decade, the rise of digital technologies has spurred newer modes of screen-based expression. Webcams, video games and other so-called “interactive media” are now central to the evolution of the moving picture � prompting not only speculation about another name change but soul-searching about what a cinema school properly should be and do.

As they had many times in recent years, Daley and Lucas put their heads together. Lucas, a longtime member of the school’s Board of Councilors, had been instrumental in the creation of its Institute for Multimedia Literacy (cinema.usc.edu/iml). Since its launch in 1997, the institute has been systematically expanding the notion of literacy to include the language of visual, aural, dynamic and interactive media: effectively adding a fourth R � let’s call it “reel literacy” � to the three R’s traditionally considered the foundation of a liberal education. Last fall, IML went from prototype to practice, when the USC College of Letters, Arts and Sciences partnered with the institute to have some 600 students use multimedia in their core General Education courses.

“If students aren’t taught the language of sound and images,” Lucas had famously asked Daley in a conversation later reported by the New York Times, “shouldn’t they be considered as illiterate as if they left college without being able to read or write?”

The dean was on the same wavelength. “We’ve come to a point in history where access to computers and digital technology isn’t the main factor in ‘the digital divide,’” she says. “Rather, the divide is between those who can effectively create meaning with this technology and those who can’t.”

Nearly a decade after founding IML, Lucas’ and Daley’s thinking on these subjects had moved beyond the formation of a mere institute to the point of wanting to extend the school’s mission. In addition to its core objective of training entertainment professionals, the school would convey the power of sound and image to education as a whole.

“It positions all who learn here as leaders not just for the moment, but for generations to come,” Lucas says.

This isn’t such a far-fetched idea. The school’s true foundation, Daley and Lucas agree, rests on a simple and enduring element of human communications: storytelling. Although stories vary widely in content, format and technique, they share a unifying element of movement. Movement in the temporal sense, in the emotional sense, and even in the physical sense (think of mobile-users accessing data through portable devices).

This concept of movement loomed large in the school’s moniker makeover. The ancient Greeks, who knew how to spin a yarn, used the word kino to denote movement. USC carries that legacy on, drawing on one of kino’s anglicized offspring, “cinematic,” to represent what the school does.

And so we arrive at the era of the USC School of Cinematic Arts, dedicated to using all media � past, present and those yet to be invented � to shape the stories that will soon be playing at a theater, cell phone or ocular implant near you.

For Lucas, who came to Los Angeles in the early ’60s from the central California community of Modesto, the building and endowment is a chance to pay homage to the institution that set him on the road to becoming one of the world’s most famous filmmakers, as well the head of a multi-billion-dollar firm whose innovations in marketing techniques as well as production, editing and distribution technologies fundamentally altered the entertainment industry.

“USC is where I learned everything I know about cinema,” says Lucas. “I have a passion for cinema, not only as an art form but also as a communications medium. It’s my belief that it is an extremely important aspect of our modern culture.”

Of Lucasfilm’s $175 million commitment, $75 million goes directly to construction of a new cinematic arts complex to replace the George Lucas Instructional Building, erected in the early 1980s. The $75 million figure is about three-quarters of the sum needed to finish and furnish the structure.

The donation’s timing couldn’t have been better, with occupancy in the present building now at 120 percent of capacity. Student projects place tremendous demand on soundstages and other production areas. A lack of offices compels up to six adjunct instructors to share a single room. Shortages in classrooms mean students have to take courses in non-cinema facilities scattered throughout campus.

The new five-level complex, to be located directly to the west of the present building, is slated to open in December 2008. In addition to expanded classroom and administrative space, the facility will provide ample room for creativity and community. Among its features are sound- and image-editing suites; screening rooms ranging in size from 40 to 200 seats; multimedia conference rooms; exhibition and installation areas; and a 200-seat caf�. There’s also an area dedicated to displaying some of the 5,000-plus rare artifacts in the school’s archives, such as the earliest-known motion picture cameras.

The remaining $100 million is pledged to the school’s endowment. Added to the existing $50 million endowment, Lucas’ bounty is expected to be a powerful catalyst toward reaching the school’s overall $200 million endowment goal. These funds are used in perpetuity to support student services; faculty and staff development; facilities, equipment and technology needs; and alumni activities.

“Without change, there is no improvement on the past,” noted USC President Steven B. Sample at the groundbreaking. “Rebranding the school stands as a testament to the achievements that came before, and also to what the future holds.”

A glimpse into that future is possible today through the work of alumni, students, faculty and staff. Two months ago, Sony Computer Entertainment released flOw, the first of three downloadable games for the PlayStation3 developed by 2006 cinema graduates Jenova Chen and Kellee Santiago. There’s a new initiative at the school to develop narrative and animation techniques for the super-small screens of cell phones and other mobile appliances. The future is also unfolding with installation pieces and massive multi-user games that go beyond mere online play to game-building itself as entertainment. Going hand-in-hand with the school’s strength in film and television theory and practice, these developments underscore Sample’s concept of improving on the past to shape the future.

In 1877 British photographer Eadweard Muybridge set out to answer a question that had perplexed equestrians through millennia. When a horse runs, are all four of its hooves ever off the ground at the same time?

To resolve the issue, Muybridge rigged up a series of still-image cameras around a race track. When the horse cantered by, its legs tripped a thin wire, activating the shutter mechanisms. At the end of the run, Muybridge had a step-by-step record of the animal’s gait. Scanning the shots, he pulled forth a frame that did indeed depict the 1,200-pound beast momentarily aloft.

Muybridge didn’t realize it at the time, but his experiment did more than settle the airborne equine enigma. It was a landmark in cinema, inspiring inventors on both sides of the Atlantic to develop “motion pictures.”

Years later, when USC’s cinema program was still housed in a simple wooden structure, a 1960s-era student scrawled words on the wall that would become the institution’s informal motto: “Reality Ends Here.” The phrase referenced the ability of cinematic techniques to defy or at least suspend in our minds the rules of nature.

But far from ending reality, the School of Cinematic Arts is, as was the case with Muybridge’s “flying horse” experiment, ideally situated to take us to places yet to be imagined.