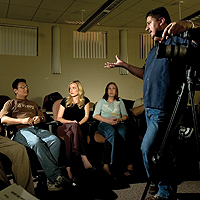 Rafael Angulo, an associate clinical field faculty member at the USC School of Social Work, was named 2007 Social Worker of the Year by the Southern California Chapter of the National Association of Social Workers at an awards ceremony on March 28 at the Huntington Hospital in Pasadena.

The award honors a member of the association who exemplifies the best of the profession’s values and achievements through specific accomplishments.

Angulo, who has been with the USC School of Social Work since 2001, was nominated by his students for his Media in Social Work class that teaches aspiring filmmakers how to utilize a universal medium for social justice and advocacy.

“The role of the social worker is to be both a ‘mystic’ who befriends creativity and a ‘prophet’ who calls out pathologies of power,” Angulo said. “It is through the creative use of the documentary that my students are able to birth new stories that call attention to the disenfranchised and elicit social action for liberation.”

Students noted his genuine interest and dedication to the field, which have helped secure a $36,000 grant to purchase video-making equipment for the school and establish the USC School of Social Work Film Festival as a venue for screening student documentaries on a variety of social issues.

“I am awed by my students, and my passion for social work is easily transmitted to them,” Angulo said.

He also has earned a grant through the university, which he used to coordinate the Looking Out/Looking In documentary film screening series for the USC Visions and Voices: Arts & Humanities Initiative.

At the school’s 2006 commencement ceremony, Angulo was presented the Hutto Patterson Foundation Distinguished USC Social Work Faculty Award for excellence in teaching and outstanding service to the university, the school and the community.

He also received the Jane Addams Faculty Award, an honor graduating students bestow on a member of the faculty who they believe has shown them exceptional academic, administrative and moral support. No other faculty member has won both awards in the same academic year. Angulo also has won multiple awards at film festivals.

Outside the classroom, Angulo facilitates group therapy for Spanish-speaking fathers, provides individual counseling to the immigrant community and is working on documentary projects for national distribution.