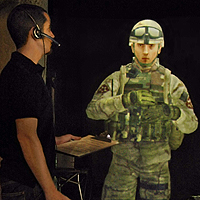 Sgt. Blackwell serves as the public face for some of the most advanced virtual human research in the world.

For someone who lives only in a computer, Sgt. John Blackwell sure gets around.

Blackwell is the walking, talking showcase for virtual human research at USC’s Institute for Creative Technologies. He has not yet achieved his mission � to teach, train or mentor Army recruits � but his enviable social life shows how human a virtual character can be.

“I consider him a close friend of mine,” said Army chief of research John Parmentola, who travels with Blackwell stowed in his laptop, ready to spring into action with a boot from his superior.

Most recently, Blackwell charmed teenagers in the Presidential Classroom, an honors internship program that brings high school students to Washington, D.C. And he has been chatting up visitors at the Smithsonian’s prestigious Cooper-Hewitt National Design Triennial exhibit in New York City.

Diane Piepol, a project director at ICT who admits to a years-long, platonic relationship with Blackwell, said, “I knew we had succeeded when at the Army science conference in 2004, there were people who were saying goodbye to the character before they walked away.”

One meeting, and it’s easy to see Blackwell has charisma. But why he has it is not so clear.

Plus, some people can’t resist a man in uniform. And a sense of humor never hurts. Ask if he’s married and Blackwell replies: “That’s outside my area of operation.”

But while Blackwell doesn’t mind wisecracks, his ultimate goal is dead serious: to help the Army train its soldiers more effectively and then to try the same methods on civilians.

“Imagine a Blackwell that’s maybe not a soldier now,” said Randall Hill Jr., executive director of ICT. Other characters with different personalities and skills could serve as tutors, coaches and guides, Hill said.

Until then, Blackwell will continue to serve as the public face for some of the most advanced virtual human research in the world. Every advance in artificial intelligence at ICT is incorporated in Blackwell once it is judged to be robust enough, Hill said.

And Blackwell’s descendants probably will leave their father in the dust.

But for now, every virtual character starts from a real human. Richard Lindheim, the former executive director of ICT, and Dave Hendrie, who graduated from the USC School of Cinematic Arts and served in the Army, crafted the dozens of responses in Blackwell’s brain. Before leaving ICT, Hendrie gave Blackwell his voice.

What may be the world’s most advanced suite of voice recognition and artificial intelligence software helps Blackwell understand when he’s being spoken to and either reply appropriately or guide the conversation back to his “area of operation” � mainly the technology that makes him tick.

After meeting him at the Cooper-Hewitt Triennial, the renowned lighting design firm Ingo Maurer GmbH asked Blackwell to be its guest of honor at the trend-setting show Salone del Mobile in Milan, Italy.

The mission of the ICT is to build a partnership among the entertainment industry, Army and academia with the goal of creating synthetic experiences so compelling that participants react as if they are real. The result is engaging, new, immersive technologies for learning, training and operational environments.

To read about Blackwell’s participation in the Triennial, go to http://www.cooperhewitt.org/EXHIBITIONS/triennial/design_life_now.asp, click on the link for the Triennial web site, and search for “Institute for Creative Technologies.”

The Triennial also features another ICT project, the training program “Every Soldier a Sensor” rolled out by the Army: http://www4.army.mil/ocpa/read.php?story_id_key=8152.

He’s a Virtual Human Who Keeps It Real