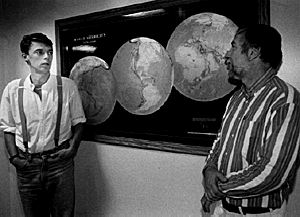 Physicist Hubert Saleur with geological scientist Charles G. Sammis: ” We feel intuitively that the model we are developing captures key features of the way earthquakes behave.”

Just as contractions spaced closer and closer together tell an obstetrician when a baby can be expected, so the timing of bursts of seismic activity may allow forecasts of some major quakes. That’s the theory behind an approach pioneered by USC geophysicist Charles G. Sammis and French physicist Didier Sornette – though in its first application, the predicted earthquake failed to materialize.

Undaunted, the interdisciplinary team of researchers – led by Sammis, who is professor and chairman of the Department of Earth Sciences, and Hubert Saleur, an associate professor of physics and mathematics – still hopes to perfect the technique. “In many cases we’ve been able to identify a buildup of activity before a major quake,” Sammis said.

This pattern – pulses of stronger and stronger activity punctuated by shorter and shorter gaps – preceded the Loma Prieta quake in Northern California. The actual timing of the quake – on Oct. 18, 1989 – fell where the shortening interval between activity periods would indicate it should.u0000

The analysis by Sammis and his collaborators was based on theoretical and laboratory studies of the way materials – especially non-uniform, heterogeneous materials like the earth’s crust – behave under stress.

In such materials, isolated micro-cracks appear first. With the increase of load, the cracks grow and multiply. These small cracks merge, creating local failures. Local failures come together to create larger regional failures, and these merge to create a general failure.

The mathematical studies of Sammis, Saleur and Sornette (based at the Université des Sciences in Nice, France) describe such patterns using a notion that has become highly influential in modern scientific practice: fractals.

Fractals are structures whose parts resemble or repeat the whole. A coastline, for example, may look like a complicated pattern of inlets and peninsulas on a small-scale map. A larger-scale map showing a section of the same coastline – of one inlet, for example – reveals smaller geographical features, mini-peninsulas and micro-inlets, that reproduce the same kinds of patterns.

Other common fractals include mountain ranges or the branching patterns found in plant limbs or blood vessels, which seem to defy generalization by virtue of their complicated, irregular, seemingly unpredictable shapes, but which can actually be described by surprisingly simple mathematical functions.

To the group of fractal patterns, study over recent years has added another example.

“Researchers have found fractal patterns in the spatial distribution of earthquakes and earthquake faults in the crust in many areas,” Sammis said.

In their efforts to extend the three-dimensional fractal structure of earthquake faulting into a fourth dimension – time – Sammis and his coworkers are using mathematics developed to describe the drastic changes between physical states, as when water freezes, changing from a liquid to a solid.

“A verbal description of the process is general,” Sammis said, “but the mathematical relations make highly specific predictions, which can be applied to actual geological data. It predicts, given the time between steps and the energy of the steps, the date and magnitude of earthquakes.”

The distribution of earthquakes follows a “power law”: very small quakes are very common, very large ones are very rare, with a simple mathematical relation describing the correlation between violence and frequency. Sammis and co-workers used a technique from phase-transition mathematics to make an adjustment to this simple power-law relation. As a result, they were able to take into account the fractal nature of the structures that fail in earthquakes – that is, the tendency to fail in a series of steps, first on smaller scales, then on larger ones.

The adjustment “makes the data fit much more closely than a straight power-law prediction would,” Sammis said.u0000

Sammis used the technique recently to predict a quake in a 400-square-mile area in central California around the community of Parkfield within a time span of some 160 days (running from Feb. 1 to July 9).

The quake did not occur, but Sammis and Saleur are not discouraged. “It is part of the research process,” Sammis said.

“Earthquake prediction has a long history of low success, and it would certainly be remarkable if this were reversed in a single stroke,” Sammis said. “Nevertheless, we do feel intuitively that the model we are developing captures key features of the way earthquakes behave, and we plan to continue to refine it.”u0000

Birth pangs of an earthquake