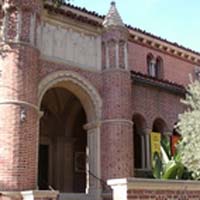 The best way to honor the dead, President Steven B. Sample said at the service, is to “live our lives with integrity and noble purpose.”

USC students, faculty, administrators and staff filled the pews and balcony of United University Church on April 19 to remember and mourn those we have loved and lost.

The ceremony, held annually before commencement, took on a special poignancy this year as the names of those tragically killed at Virginia Tech on April 16 were read along with those in the Trojan Family who have died.

Attired in white uniforms, members of USC’s Navy ROTC attended to mourn the death of Marine officer First Lt. Shaun M. Blue ’04, who was killed in combat in Iraq on April 16.

The interfaith memorial service included a reflection from USC President Steven B. Sample, who attended along with USC Provost C. L. Max Nikias. Sample told the assembled mourners that the deaths at Virginia Tech “hurt us to our core,” since universities are supposed to be places of tranquility and beauty. “We are stunned, we are distressed,” he said, “and we join in common purpose to express our grief.

“Today, we are all (Virginia Tech) Hokies. This is true empathy and solidarity. When others grieve, all of us grieve,” he said, before reading from John Donne’s meditation, “No Man Is an Island.”

The best way to honor the dead, Sample concluded, is to “live our lives with integrity and noble purpose.”

The one-hour service, organized by Rabbi Susan Laemmle, dean of the Office of Religious Life, began with the haunting violin sounds of “Ashokan Farewell,” played by Christopher Luther, a USC Thornton School of Music student. It included a Buddhist reflection, a recitation from the Qur’an, prayers from the Baha’i faith and Jainism, and a Kaddish, a traditional Jewish prayer of mourning.

The names of 120 members of the Trojan Family who died this past year were read aloud, followed by the names of the students and faculty members killed at Virginia Tech.

The names were read by Lauren Renaud and Riaz Dini, co-chairs of the USC Interfaith Council.

The mourners then lit votive candles and placed them on a memorial table.

An invocation was given by Elizabeth Davenport, senior associate dean of religious life, and a prayer was said by Frank Wulf, pastor of United University Church.

Other music included Bach’s Sarabande, played by Elizabeth Willey, a cello student of USC Thornton School of Music professor Eleanore Schoenfeld, who died in January, and a dreamlike electric guitar solo played by Thornton DMA student Sean McGowan, who was mourning his stepmother.

The service concluded with a prayer from Gabriel Faur�’s Requiem, sung by soprano Anna Johnson, a USC Thornton performance major.