When the USC Leslie and William McMorrow Neighborhood Academic Initiative celebrates the Class of 2021 this weekend, it will mark the end of a seven-year journey for the 83 scholars graduating from USC’s rigorous college prep program. For Alma and Carlos Cáceres, it will mark the end of a 16-year journey with the program. Emmely Cáceres will be the last of their four daughters to graduate from the program, and she will also be the fourth daughter to attend USC on a full academic scholarship.

The journey began with Nemesis Salguero’s desire to attend USC after attending a summer camp in the fifth grade. She fell in love with the college campus that was within walking distance of her home. When the initiative came to her school, she grabbed an application and didn’t look back.

“I knew the application had USC on it, and that is where I wanted to go,” Nemesis said. “After the information session, I knew it was a big commitment and I knew it was going to be a lot of hard work.”

Alma and Carlos Cáceres highly valued education and knew the USC Neighborhood Academic Initiative, or NAI, was the right program for their family and for their daughters to have the opportunity to attend college.

“NAI shows kids in these neighborhoods that they can go to college. They do have to work harder, but it is not impossible,” Alma said. “It isn’t important which college you attend, but it’s important that you attend and that you finish.”

Alma and Carlos Cáceres encourage their daughters to embrace challenges

The university’s premier college prep program enrolls students entering the sixth grade and requires its scholars to attend early morning tutoring sessions and Saturday Academy in order to prepare them for the rigors of high school and college. Parents come along for the journey as they are required to attend workshops and information sessions through the NAI’s Family Development Institute, which helps them support their scholars through the journey.

“In our culture, it is common to want our children to stay with us and to stay close to home, even as they become adults,” Alma said, noting that the lessons she learned were invaluable in creating a support system. “As difficult as it is, thanks to the program I learned that I had to support my daughters and I had to let them fly.”

“People hear that I went to school six days out of the week for seven years of my life, and it sounds insane,” Nemesis said. “It helped me practice discipline and showed me how important it is to know how hard you have to work to get the reward.”

I’ve always told my daughters that they are the same as anyone. You can get what you want if you work harder than everyone else.

Alma and Carlos Cáceres always encourage their daughters to work hard and never be afraid to take challenges head on.

“I’ve always told my daughters that they are the same as anyone. You can get what you want if you work harder than everyone else,” Alma said. “They earned everything they have received.”

While Nemesis set the example, being the first in the family to graduate from the program and attend USC, Alma set the tone. The matriarch of the family, she is fierce, detail oriented and a disciplinarian with high standards. She would revise the girls’ homework and wouldn’t let them leave the house unless it was complete.

“I was very strict. I set the house rules, and for me not going to school wasn’t an option,” Alma said, adding that her old-fashioned approach was necessary for the girls to succeed. “It was the only way they were going to learn to be responsible.”

Alma and Carlos didn’t just talk the talk. They walked the walk, doing whatever was necessary to support their girls. Their home was usually empty by 6 a.m., like clockwork. Carlos would head to construction sites, Alma would leave for work as a nanny and the girls would go to early morning tutoring sessions. 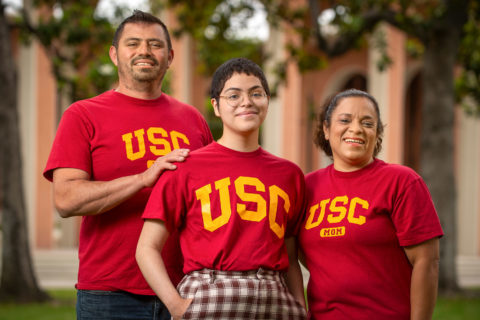 Emmely Cáceres with her parents, Carlos and Alma Cáceres. Emmely is the youngest NAI scholar in a family that has participated in the program for 16 years. (USC Photo/Gus Ruelas)

On Saturdays, when most families would relax and the kids would sleep in and enjoy morning cartoons with big bowls of cereal, Alma, Kimberly, Karla and Emmely would spend their day with NAI.

Being around the initiative at an early age eased some of the pressure Emmely carried as the last one to graduate from the program.

“I’ve been doing NAI since I was little. I picked up things as I was growing up,” she said. “It made me better prepared.”

The confidence she gained by being around the initiative for more than a decade and having her sisters to lean on for support eased the anxiety when it came time to wait for her acceptance letter to arrive. When it did, an overwhelming sense of joy and pride took over Alma and Carlos. To the proud parents, it was akin to winning the lottery, only the ticket was purchased with hard work and discipline.

Emmely enrolling and attending USC in the fall made Alma reflect on the 16 years of Saturdays sacrificed and the weekend trips that couldn’t be planned.

“It’s not a sacrifice when you do it out of love,” she said. “All I have in my heart is gratitude. If I had to do it all over again, I would.”

Inspired by her mother’s love, this young poet prepares for life as a Trojan

Shandela Contreras would not have graduated from USC’s Neighborhood Academic Initiative without her mom’s hard work and sacrifice, virtues she’ll carry with her as a USC student.

Youngest son aims to be family’s first child with college degree, with some help from USC

Five years ago, Christopher Chavez and his family committed to the university’s Neighborhood Academic Initiative, a decision that transformed their future.