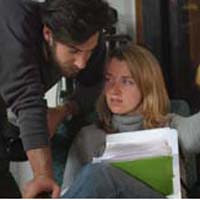 Lindsey Shockley chats with Steven Edell, the director of photography on her film, The Truth About Faces

The average eight to 10 days of a thesis film shoot could very well be the most important and stressful time spent on a set for any USC School of Cinematic Arts production student. So when third-year MFA candidate Lindsey Shockley cut that schedule to three days and added the challenge of capturing the entire film in one take, the pressure was enormous.

Today, with The Truth About Faces completed, Shockley admits shooting a 14-minute film about a mother and daughter forced to come to terms with a tragic event ensured that everyone involved in the project was at the top of their game.

“This movie is all about very awkward tensions,” said Shockley, who has always been fascinated by long takes in movies such as Rope and Nine Lives. “There are all these private and painful things going on inside these two women and by never cutting away, we never give the actors a chance to escape their character.”

Filmed in a Glendale clothing store, whose owner “gave us amazing access to clear everything and literally take over,” Shockley said that the intense preparation was pivotal before she even called for “action.”

Among the challenges was building a dressing room large enough to accommodate two actors, a costumer, the Steadicam operator and his equipment.

“There came a point when I had to give up all the pre-planning and let the film become real,” Shockley said, adding that the trickiest parts to film were the scenes involving a mirror. “If an actor dropped a line or we caught the camera’s reflection, we’d have to start again from the very beginning.”

With characters hidden behind props waiting for their cues, actors equipped with body microphones and crew members strategically placed out of sight, Shockley had to “let my baby fly” and relinquish control.

With each retake, Shockley’s sympathies were immediately turned toward her Steadicam operator, Daniel Stilling, who “literally carried 85 pounds of equipment on his shoulders.”

“There was no net and no sleight of hand,” said the North Carolina native, acknowledging that her theater background helped her feel comfortable in a situation where the action is live and there is no room for error. “It taught me that you only have to be in one place at one time, and if you know what that place is, it clarifies what your story needs.”

Now that film is completed (after 27 takes), would she recommend others to follow her lead?