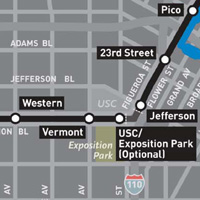 Since there is no current funding for the Trousdale station, it is shown as “optional” on planning maps.

Construction of the Exposition Light Rail segment that will curve around the southeastern border of USC will begin on May 14, the Monday after commencement.

The $640-million project starts near Seventh Street and Wilshire Boulevard, traveling south along Flower Street and then west along Exposition Boulevard until it reaches Culver City.

Most of the summer construction will focus on the section where the train will go underground � on Flower south of Jefferson Boulevard as it turns west onto Exposition until Pardee Way, said A. Bingham Cherrie, USC associate vice president of planning.

“People need to take into account the construction and try to avoid the whole area this summer,” Williams said.

Most of the work will take place at night. Steel plates will cover the construction during the day to keep traffic moving. Streets should remain open, but lanes, including some interstate off- and on-ramp lanes, could be closed. There may be some road closures at night.

The underground section “is being called the critical path as it will take the longest to complete,” Williams said.

The major above-ground work is scheduled to end by Labor Day. Then actual tunnel excavation begins but should cause fewer traffic headaches.

“This is all in a perfect world,” Cherrie said.

Construction in the median along Exposition will continue into the fall, but Cherrie said there always will be safe access between campus and the L.A. Memorial Coliseum during football games. When the line is finished, pedestrian crossings will remain at Trousdale Parkway, Watt Way and Pardee Way.

Some of the utilities on Exposition already are being relocated to prepare the site. Much of the metered parking along that boulevard was removed earlier this semester.

USC also sold two small parcels of land to the Metropolitan Transit Authority to accommodate for the train. The northeast corner of Vermont Avenue and Exposition will become a right turn lane, and a parking lot near the Tyler Building will house a power plant for the train.

Phase 1 of the rail line that will end in Culver City is scheduled for completion in 2010. Stations are planned at Flower and Jefferson, Trousdale and Exposition, and Vermont and Exposition. There currently is no funding for the Trousdale station, so it is shown as “optional” on planning maps.

“We are continuing to work with the Exposition Metro Line Construction Authority staff with issues that might arise during design and construction,” Cherrie said.

The line will provide another link between USC and downtown Los Angeles, which is in the midst of a renaissance.

Thousands of lofts, combined with Staples Center and the under-construction entertainment and hotel complex LA Live, are transforming the area just north of campus. In addition, the Galen Center, USC’s sports and performing arts venue, and University Gateway, a planned retail and apartment complex, are destination locations.

The Exposition line eventually will continue to Santa Monica, with the final link made during a second construction phase.

Rail Construction Near USC to Begin