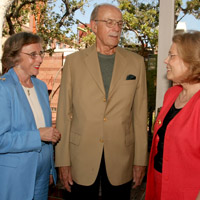 Barbara and Roger Rossier with Danielle Mihram, director of the Center for Excellence in Teaching

Two individuals who have made significant contributions to education will be honored during the 2007 doctoral commencement ceremonies of the USC Rossier School of Education on May 10.

The prestigious Recognition of Outstanding Support/Service for Education (ROSE) Award will be presented to Roger Rossier, M.S. Ed, ’63, Ph.D., ’73 and Carol Fox, M.S. ’62.

Rossier is a lifelong educator and philanthropist. In 1995, he and his wife Barbara Rossier, USC Trustee and chair of the USC Rossier School’s board of councilors, donated $20 million to name the USC Rossier School of Education. Roger Rossier continues to be actively involved with USC’s SCions Scholarship Committee, which raises funds for students who are related to USC alumni, and has served as a mentor for USC Rossier School graduate students interested in vocational training.

In 1969, he accepted the position of dean of guidance at Pacifica High School in Garden Grove and then worked as a counselor at Cypress Community College in north Orange County while working on his Ph.D. In 1980, the Rossiers purchased a small private school that taught emotionally- and learning-disabled children and turned it into a highly successful, private, special education venture.

Fox is also a member of the USC Rossier School’s board of councilors and served as president of USC’s Town & Gown and the USC Rossier School of Education’s Alumni and Support Association. She presently sits on the USC Alumni Association board of governors and in 2006 received the USC Alumni Service Award, which recognizes outstanding volunteer efforts on behalf of the university.