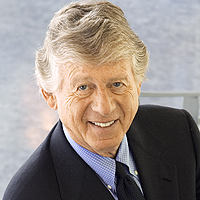 An award-winning broadcast journalist, an independent California Supreme Court justice, a towering figure in cinematic arts and a Nobel laureate known for his pioneering role in the birth of modern psychopharmacology received a new wardrobe item from USC on May 11 � a doctoral hood.

The black hoods, lined in gold with a cardinal chevron to represent USC, are edged in colored velvet to reflect the particular degree awarded.

Arvid Carlsson, professor emeritus of pharmacology at the University of Gothenburg in Sweden, received a golden yellow-edged Doctor of Science hood from R. Pete Vanderveen, dean of the USC School of Pharmacy.

For 25 years, Ted Koppel was the anchor and managing editor of ABC’s highly regarded Nightline, which was launched in 1980 during the Iranian hostage crisis as television’s first late-night network news and public affairs program. He is currently the managing editor of the Discovery Channel, where he anchors and produces programs on global topics. He also provides commentary as a senior news analyst for National Public Radio and opinion pieces as a contributing columnist to The New York Times.

Before retiring from ABC in 2005, Koppel’s lengthy career at the news organization had included serving as anchor of the ABC Saturday Night News, chief diplomatic correspondent, bureau chief in Miami and later Hong Kong, and Vietnam War correspondent. He was an embedded correspondent in 2003 during the Iraq War. He has covered every presidential campaign since 1964. When starting out with ABC Radio News as a 23-year-old general assignment reporter, one of his first assignments was covering the assassination of President John F. Kennedy.

Born in England in 1940, Koppel moved to the United States with his parents when he was a teenager and became a U.S. citizen in 1963. He earned a bachelor’s degree from Syracuse University and a master’s degree in mass communications research and political science from Stanford University. He began his broadcasting career as a desk assistant with WMCA Radio in New York City.

His publications include a memoir Off Camera: Private Thoughts Made Public. He is also the co-author of Nightline: History in the Making and the Making of Television and a 1977 novel, In the National Interest.

A member of the Broadcasting Hall of Fame, Koppel has earned every major broadcasting award, including multiple Emmys, duPont-Columbia Awards and George Foster Peabody Awards. He has received more Overseas Press Club Awards than any other journalist in the club’s history.

Clint Eastwood has made extraordinary contributions to American culture through his work as an award-winning director and producer, an actor and composer. He is a four-time Academy Award winner and a 10-time nominee.

Eastwood has directed more than two dozen films and scored several of them, including the 2006 film Flags of Our Fathers, which tells the story of the U.S. Marines who raised the flag during the battle for Iwo Jima in the famed photograph. A companion film � Letters From Iwo Jima � depicts the same World War II battle from the Japanese perspective. Letters From Iwo Jima earned a Golden Globe for best foreign language film.

Eastwood has won Oscars for best picture and best director for Million Dollar Baby and Unforgiven, both of which he also starred in. His score for the boxing film Million Dollar Baby received a Grammy nomination. He has also earned three Golden Globes as best director for Million Dollar Baby, Unforgiven and Bird. He has been the recipient of the Irving G. Thalberg Memorial Award, the Cecil B. DeMille Lifetime Achievement Award, the inaugural Jack Valenti Humanitarian Award, the American Film Institute’s Lifetime Achievement Award and a Kennedy Center Honor. He was recently named Chevalier de la L�gion d’Honneur by the French government.

Born in 1930 in San Francisco, Eastwood worked as a logger and a gas-station attendant before being drafted into the Army and assigned to Fort Ord. His early acting career included minor roles in feature films and the part of cattle driver Rowdy Yates in the long-running television series Rawhide.

In a brief foray into elected politics, Eastwood ran for mayor of the town of Carmel. He won with 72.5 percent of the vote and served from 1986 until 1988.

A three-time USC alumna, Joyce Kennard has served for nearly two decades on the California Supreme Court, where she is recognized and admired as a diligent and independent-minded jurist. An advocate of expressing the opposing viewpoints within the court, she writes dissenting opinions on the majority rulings with which she disagrees.

Appointed in 1989, Kennard is the first Asian American and the second woman to serve on the state’s highest court.

Born in 1941 in Indonesia, Kennard grew up amid the deprivation and turmoil of World War II and its aftermath. Her Dutch-Indonesian father died in a Japanese prison camp when she was an infant, and she and her Chinese-Indonesian mother were held in an internment camp. They moved to the Netherlands when she was 14. Kennard’s plans for a college education were deferred when a serious infection led to the amputation of her right leg. In 1961 she came to the United States, where she worked as a secretary for seven years before attending college.

Among her many awards are the Margaret Brent Women Lawyers of Achievement Award from the American Bar Association and the Guardian Award from the USC School of Policy, Planning, and Development. She was the first recipient of the California Women Lawyers’ Rose Bird Memorial Award.

Scientist Arvid Carlsson, co-recipient of the 2000 Nobel Prize in physiology or medicine, has improved the lives of countless people around the world through his pivotal discovery of dopamine’s role in brain function and his exploration of pharmacological treatments for neurological and psychiatric disorders. His pioneering research into the influence of drugs on neurotransmitters such as dopamine and serotonin paved the way for the development of new therapies for people with Parkinson’s disease, schizophrenia and depression. These new treatments include the selective serotonin reuptake inhibitors, or SSRIs, that are used to treat depression.

Born in Sweden in 1923, Carlsson earned a medical degree and a Ph.D. from the University of Lund, where he went on to hold teaching positions in pharmacology. During 1955-56, he conducted research in Bethesda, Md., as a visiting scientist in the Laboratory of Chemical Pharmacology at the National Heart Institute. In 1959, he was named professor and chair of the Department of Pharmacology at the University of Gothenburg, where he served as chair from 1959 to 1976 and achieved emeritus status in 1989. He later joined with other collaborators to establish A. Carlsson Research Aktiebolag, a biotechnology company in Sweden that develops new drug treatments for neurological and psychiatric disorders.

Among his honors and awards are the Anna-Monika Stiftung First Prize, the Japan Prize in Psychology and Psychiatry, the Legion of Honour from the French government, the Research Prize of the Lundbeck Foundation in Denmark, the Wolf Prize in Medicine and the Lieber Prize from the Scientific Council of the National Alliance for Research in Schizophrenia and Depression.