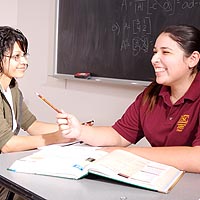 At commencement, a dozen graduates from the neighborhoods immediately around USC have a special reason to be proud. They are part of the 10th anniversary class of the first graduates from USC’s Neighborhood Academic Initiative (NAI), a program to encourage local middle and high school students to prepare for college.

The university began the NAI program in 1991 to reach out to middle school and high school students at Foshay Learning Center and Manual Arts High School.

These students, many from families where no one has attended college, are encouraged to put that goal in their sights. From seventh grade on, they attend classes and tutoring sessions at USC on Saturday mornings for 22 weeks in the school year.

In high school, they take advanced placement and honors classes. If they maintain good grades and win admission to USC, the university, which pays for most of the program’s operating costs, offers them grants and other financial aid to pay for college.

Through last year, 412 students had completed the program and 132 are attending or have graduated from USC, while 194 have attended other four-year colleges. Thirty-three students are graduating from NAI this spring and 13 of them have been offered admission at USC.

Several of the NAI students who enroll in USC then help lead the tutoring sessions for students hoping to follow in their footsteps. USC seniors Marlene Chavez and Carmen Gonzalez are two who have been leading the Saturday morning classes they once took.

“I really, really like the fact that they included our parents, that they show them exactly what we are doing,” said Chavez, a psychology major who will start on a master’s degree at the USC School of Social Work this fall.

The Family Development Institute is an integral part of the program, said NAI director Kim Barrios. “We believe it’s important to bring in parents as partners. We want them to have high expectations for learning about the pathway their kids are on.”

In the years that the program has been in existence, “we’ve had to adjust what we do,” Barrios said. “Our expectations for the students have risen because the expectations at USC have risen. GPAs have risen exponentially” as have SAT scores, she added. “We’ve had to be the bridge, more so than ever before.”

NAI has increased the number of Saturday sessions from 20 to 22 a year and has a higher level curriculum now. “There are now five days of tutoring after school � before we had three,” Barrios said, adding, “In essence, our children have no time on their own, but it’s worth it and they know it.”

Once the NAI graduates are on the USC campus, the Undergraduate Success Program helps them make sure they are in the proper classes and gives them additional support.

Even with all the preparation they’ve had, the students find they sometimes face a “culture clash” on campus. “We’re used to being in schools with mostly Latinos and African-Americans” and that’s not the case at USC, Gonzalez said. She was the only Hispanic person in her dormitory freshman year, and Chavez was often the only one in her classes. “It’s a little bit intimidating,” Chavez said.

And what paid off? “Probably the same thing � the expectations,” Jimenez said. “There was always somebody there who was pushing you, telling you what you needed to do to get into college. The people who weren’t in the program had to figure things out for themselves. A lot of them never decided to go to college, but the NAI program was always leading us down that path.”

The 12 NAI students graduating from USC this year are: