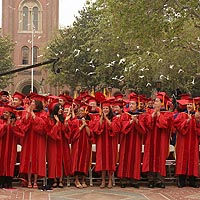 White doves are released at the 2006 ceremony.

They may not “plant a sprig of ivy” as in 1913 or watch the smoking of the “Pipe of Peace” as in 1915, but on May 11 at Alumni Park, more than 8,000 USC students will join the ranks of countless Trojans before them in celebrating the annual commencement exercises.

“This is the most joyful and momentous occasion of the academic year,” said USC President Steven B. Sample. “The Trojan Family has made this great university vibrant and enduring, and commencement serves as a powerful symbol of our lifelong and worldwide connections as Trojans.”

The main commencement ceremony begins at 9 a.m. following the processional that begins a half hour earlier.

Following the ceremony, graduates will break into their respective schools or academic units to participate in satellite ceremonies. Keynote speakers at those ceremonies include songwriter Randy Newman at the USC Thornton School of Music; Drew Pinsky, nationally syndicated radio host of Loveline, at the Keck School of Medicine of USC; and David L. Brewer, superintendent of the Los Angeles Unified School District, at the USC Rossier School of Education.

This year, Ph.D. students will be showcased during the main commencement processional by marching after other students and directly before the faculty. The Graduate School’s doctoral hooding ceremony will take place at Bovard Auditorium on Thursday at 9:30 a.m., with hooding ceremonies at other schools taking place during satellite events.

Also on Thursday, the Senior and Graduate Recognition Awards Ceremony will recognize students at Bovard Auditorium at 1 p.m.

The Baccalaureate Ceremony for graduating students and their families will be held at 5 p.m. at Bovard. The centerpiece of the multi-faith service will be an address by Rabbi David Ellenson, president of Hebrew Union College. The Baccalaureate Dinner will follow at 6:30 p.m. on Pardee Way.

The Chicano/Latino Ceremony and the Black Graduation Celebration will take place at 8 p.m. at Howard Jones Field and Bovard Auditorium, respectively.

The Keck School of Medicine of USC does not participate in the main commencement exercises. The M.D./Ph.D. ceremony will be held at the Shrine Auditorium on Sunday, May 20 at 3 p.m. The speaker will be Drew Pinsky, physician and radio talk-show host.