Friday was a day of firsts.

It was the first time in 70 years that USC’s commencement had taken place at the Los Angeles Memorial Coliseum — complete with a lit torch.

2021 commencement by the numbers

Diplomas (including undergraduate and graduate degrees and certificates) being conferred

Last time commencement was held in the Coliseum

It was also the first time that two separate graduating classes had shared a commencement. And it was the first time many of the graduates had seen each other in person in over a year due to the COVID-19 pandemic.

“Here at USC, I am inspired daily by the courage and perseverance I see,” President Carol L. Folt said. “I’ve been deeply moved as I’ve watched you discover new opportunities to contribute and grow, even during these difficult times.

“Whatever its impact, COVID didn’t derail or defeat you, and it certainly didn’t define you. You wouldn’t let it, and we wouldn’t either.”

Friday morning’s event kicked off a week of commencement ceremonies for USC’s classes of 2020 and 2021. It followed a full day of online ceremonies, featuring over 20 celebrations for the university’s individual schools.

About 1,500 students were on the field of the Coliseum as roughly 3,000 family members and friends watched from the stands. Even more watched from across the globe via the livestream. 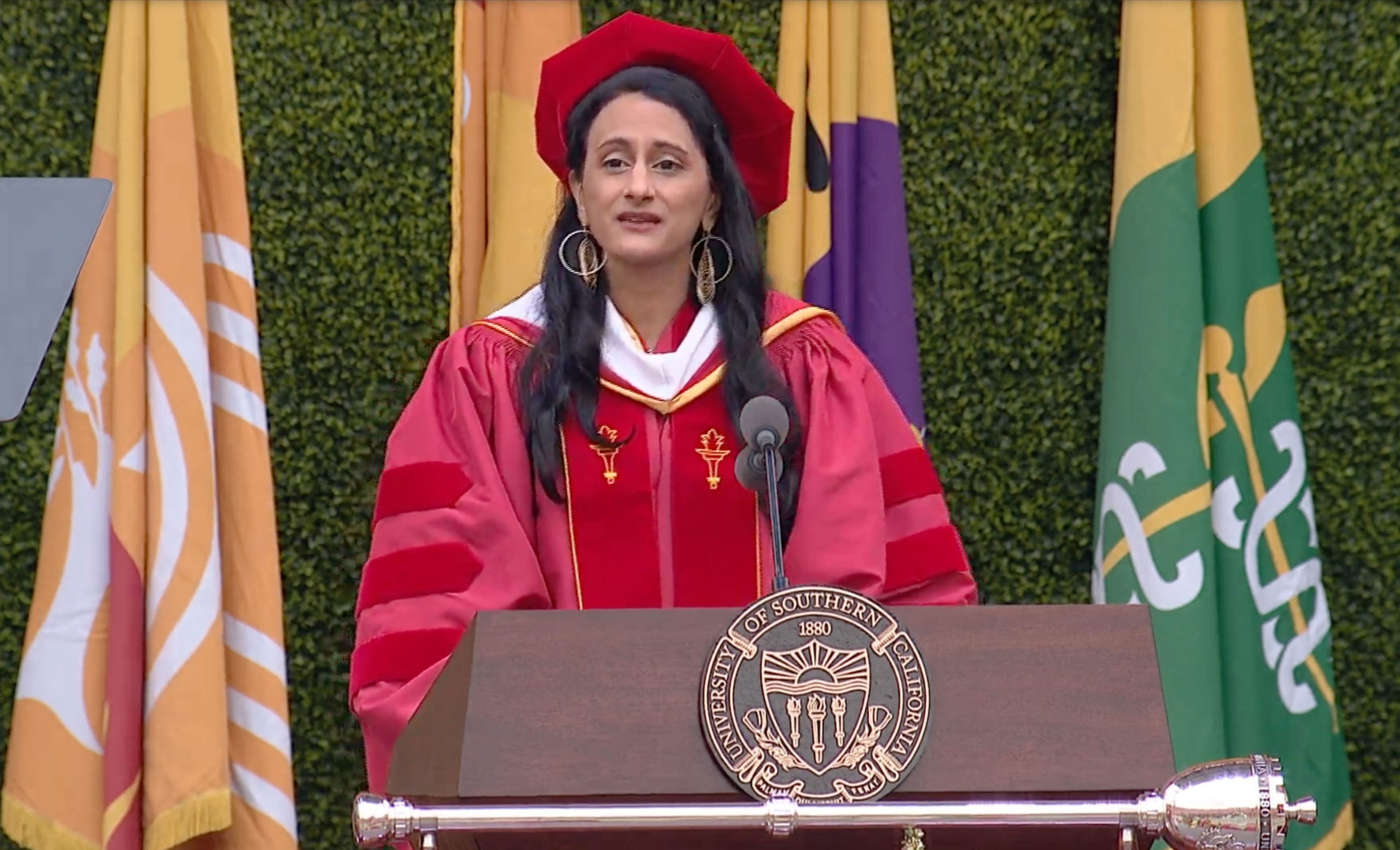 Perseverance was a consistent theme throughout Friday morning’s ceremony, from President Folt to the classes’ valedictorians to Bina Venkataraman, editorial page editor at The Boston Globe and USC’s 2021 commencement speaker.

“You’ve been forged in the fire of history.”

Venkataraman told the graduates to use all of the talent, knowledge and hard work that got them to this point to create real change.

She spoke about her experiences as a young journalist, taking on the late Sen. Ted Kennedy after he shot down a proposed offshore wind farm. The senator — furious about the story Venkataraman had written — called just about every editor at the paper, but she refused to back down. She was confident in the work she had done, and that gained the respect of her colleagues and editors.

“The way I found the courage to stand up for myself was by standing up for something larger; my courage came from wanting people to know the truth,” she said. “Courage still doesn’t always come easily to me, but I’ve discovered that I can find it in myself when I know I am fighting a good fight.” 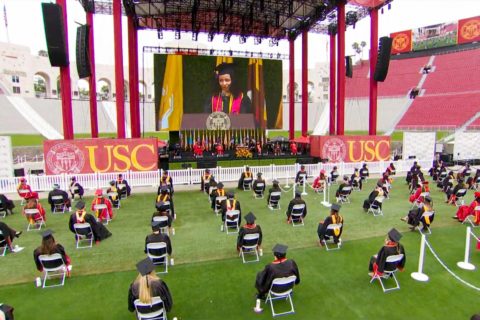 In a ceremony ripe with firsts, perhaps one of the most important was the university’s first Black valedictorian, the Class of 2021’s Tianna Shaw-Wakeman.

“To me, this revelation stands as a testament, albeit small, to both how far we’ve come as an institution, as a country, and how far we have to go,” she said.

Shaw-Wakeman — whose mother is Black and father is white — spoke about the discrimination her parents faced when they got married just over 25 years ago and the work that still must be done to combat and root out racism. She encouraged her fellow Trojans to fight for a better world, whether that’s fighting racial injustice or for a more sustainable future.

“This past year, in the midst of COVID-19, we experienced how quickly and ferociously hate can spread and become its own pandemic — but we can choose not to be a part of it,” she said. “In our future careers, future families and future relationships, we can choose to use the best parts of ourselves to see the best parts in everyone else.”

Friday’s event also saw the return of 2020 valedictorian Isabella Hauptman, who earned her master’s degree in biostatistics and epidemiology with the Class of 2021. Hauptman spoke about an idea that has come up a lot over the past year: a return to normalcy. 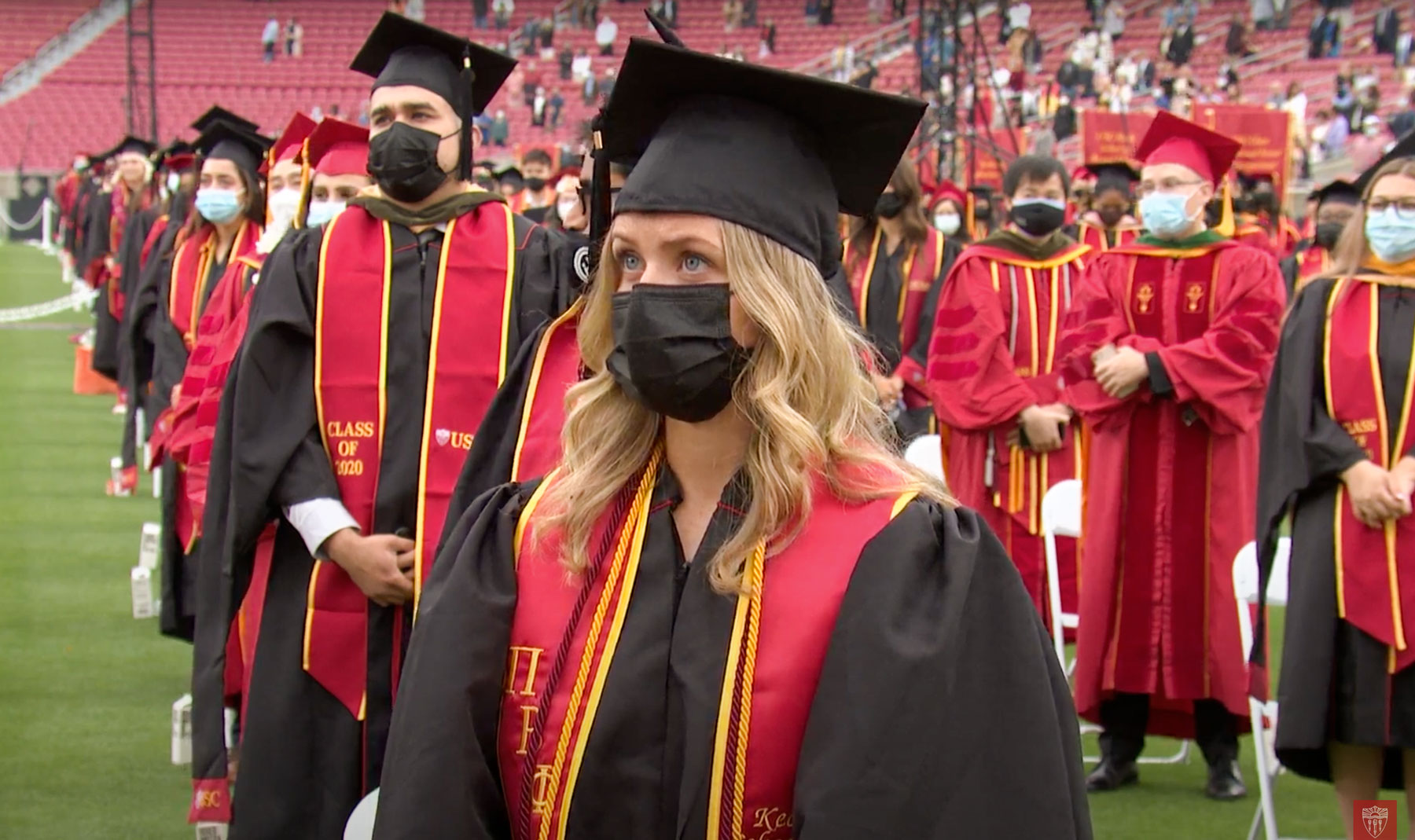 Each of the commencement ceremonies is expected to draw up to 1,500 students. (USC Photo)

Though Hauptman said she too wants a day when the world seems normal again, this idea of “returning” is misguided.

“In my humble opinion, we should be less focused on returning, and more focused on arriving. On creating. On progressing. On healing,” she said. “Last year, I asked us to identify our values and reconcile them with our responsibilities to each other, and now as we graduate, we are uniquely positioned to create a future that can more appropriately and accurately embody these values.”

The event combined elements of USC’s traditional main graduation ceremony with those of individual school and college ceremonies. After the speakers, graduates proceeded to the stage to have their names announced and their photos taken while their images were projected on stadium screens and streamed online. Due to distancing requirements, hooding ceremonies for doctoral candidates will take place in the future when restrictions are lifted. 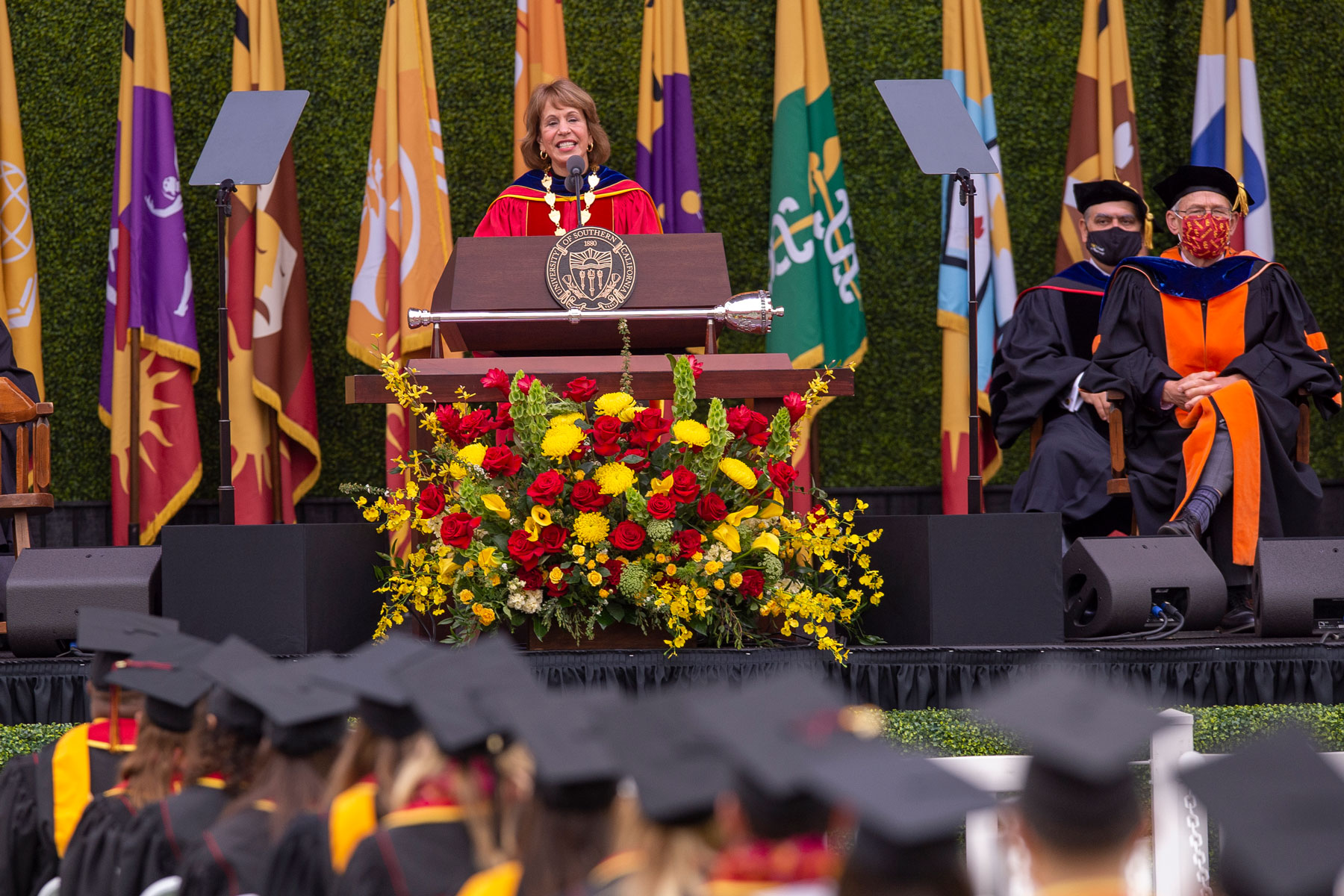 “What you’ve been through over the past year has prepared you to excel and lead,” Folt said. “You’re dreamers and doers, pioneers and trailblazers, visionaries and change agents.

“You make me optimistic about the future.”

A journalist and author whose outlook unites science, compassion and optimism, Venkataraman will look ahead to an age in which courage can prevent catastrophe.