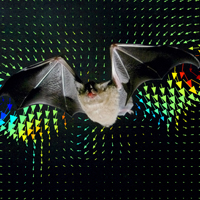 A bat is captured in flight in a wind tunnel at Lund University, Sweden. The velocity field induced by the wingbeat is shown superimposed and to scale.

Bats generate a measurably distinct aerodynamic footprint to achieve lift and maneuverability, quite unlike birds and contrary to many of the assumptions that aerodynamicists have used to model animal flight, according to USC aerospace engineer Geoffrey Spedding.

The researcher, together with a multi-institutional team of scientists, found that bat flight is quite different from bird flight, particularly at very small scales. The team based its findings on new measurements of aerodynamic performance in the wing beats of a small species of bat.

“Bats with a body mass of 10 to 30 grams � or about the weight of one or two teaspoons of sugar � and tip-to-tip wing spans of 25 to 30 centimeters � about the length of a human hand � generate very different wakes,” he reports in the May 11 issue of Science.

“The tell-tale tracks in the airflow caused by the wing beat have a very different pattern for bats, and this difference can be traced to the peculiar upstroke,” he continued. “That, in turn, is likely caused by the collapsible membrane of the bat’s wing, which needs to maintain some degree of tension.”

Bats constitute about 20 percent of mammalian species, but not much attention has been paid to them because of their nocturnal habits. Most bats eat flying insects, consuming up to their body weight each night.

Their agility and tremendous ability to maneuver in flight is accentuated by their ability to locate prey using an advanced echo-location system, which is basically a sonar operated by ultrasound.

The authors noted that bat wings are very different from those of birds because of their separate evolutionary paths to flight.

“Instead of feathers projecting back from lightweight, fused arm and hand bones, bats have flexible, elastic membranes that stretch between specially extended, slender bones of the hand,” Spedding said. “The bones and wing membrane both change shape with every wing beat, flexing in response to the balance between forces applied by the muscles and competing forces due to the air motion around them.”

In contrast with bird wings, the bat wing membrane must be kept under tension, otherwise it will flap uselessly, like a flag. As a consequence, Spedding said, there are limits to how much the wing can be folded during flight.

Spedding and his colleagues think that the unique aerodynamic wake signatures of bat wings are caused by different mechanical operations in the upstroke of the wingbeat.

“Where birds can feather their wings, opening the feathers like a Venetian blind, bats must do something different,” Spedding said. “Hence, they have developed a twisting wing path that increases the lift during the upstroke.”

This is the first time that this positive aerodynamic effect has been observed in wing flapping, he said, and it is consistent with previous speculation that was based on the bat’s complicated wing motions alone.

Spedding said the findings are just the beginning of an exciting research program to make detailed measurements of bat wings and add to a growing body of data about bat flight.

“Bats are agile hunters, capable of plotting and executing complex maneuvers through cluttered environments,” he said. “These are the traits we’d like our unmanned air vehicles to have because there are so many complex rural and urban environments in which we could use them.”

With the promise of human-engineered, micro-scale flight just around the corner, engineers also may be able to emulate bat wings, building simple mechanical wings of flexible, elastic material stretched over support rods, to improve the aeronautical performance of smaller airborne vehicles.

“Bats have relied on very flexible wings for 50 million years to propel and lift themselves into the sky,” Spedding said. “We still have a lot more to learn about the aerodynamics of bat flight and how their wings allow them to maneuver through incredibly unsteady air flows and turbulent conditions.”

Tracking the Complex Flight of Bats