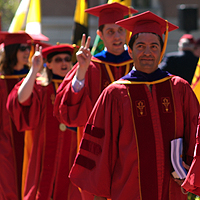 All of USC’s academic units took part in the procession.

A festive crowd of 40,000 gathered May 11 for USC’s 124th annual commencement in a colorful pageant that spread to all corners of the campus.

Koppel’s commencement address � punctuated by laughter and applause � was one highlight in a ceremony that saluted 8,000 Trojans, including 300 Ph.D. candidates, the largest number in USC history.

“I know what’s going through your minds,” Koppel began. “You’re thinking, ‘You know, he’s not as tall as I thought he’d be.’ ”

The award-winning journalist invoked social critic H. L. Mencken, who said, “It takes so little to make life unbearable: a pebble in the shoe, a cockroach in the spaghetti, a woman’s laugh.”

“That one snuck up on you,” he joked, and then explained how easy it is to become wrapped up in one’s own life, and how even something as trivial as a pebble can lead us to ignore the suffering of others.

President Steven B. Sample congratulated the graduates and urged them to remember the “intangible attributes” central to USC’s mission, including wisdom, insight, love of truth and beauty, moral discernment, understanding of the self and respect for others.

“These are the great gifts USC has to give,” Sample said. “These are the values that will sustain you and guide you as you journey through life.

“You are forever a part of the Trojan Family,” he added. Sample then asked the group of Half-Century Trojans to rise, and these USC alumni who graduated at least 50 years ago were greeted with cheers.

In his valedictory address, Koproske examined the divide between the intellectual life of college and the “real world.”

“While some say college ought to be more like the ‘real world,’ I think the ‘real world’ ought to be more like college,” Koproske said. “The spirit of skepticism and curiosity should be held as sacred to the university, and we might benefit from carrying it on into the ‘working world’ … And most importantly, let us constantly remind our co-workers how much better our football team was than theirs,” he added, to the applause of his audience.

R. Pete Vanderveen, dean of the USC School of Pharmacy, accepted the honorary degree on behalf of Carlsson, who was unable to attend. “Speech, speech!” chanted several students when a beaming Eastwood accepted his degree. Koppel, as the commencement speaker, was the only honoree to take the podium.

Koppel warned the audience against a myopic worldview, saying that it glosses over the world’s most pressing problems.

Koppel urged graduates to see this is a challenge and an opportunity. “May you find joy when you least expect it and courage when you need it most,” he said.

In his introduction of Koppel, Geoffrey Cowan, dean of the USC Annenberg School for Communication, described him as a “clarion voice in the pursuit of truth and in the protection of free speech.”

The ceremony began at 9 a.m. following the procession of students and faculty toward Alumni Park in which all 23 academic units at USC participated. Afterward, graduates and well-wishers streamed across the campus to their individual satellite ceremonies.

In her invocation, Rabbi Susan Laemmle, USC dean of religious life, remembered the Virginia Tech shooting victims, noting that the incident reminded us of life’s fragility and preciousness, and that “the human spirit is the light of God.”

Stephanie Elsayed, a graduate student at the USC Thornton School of Music, led the singing of the national anthem, and Scott Johnson, also a student at the USC Thornton School, led the singing of “All Hail,” USC’s alma mater, at the ceremony’s end. The USC band enlivened the ceremony, leading a chorus of “Fight On!” during the recessional. Several graduates joined the dancing saxophone and trombone players in celebration.

“Graduates of 2007, congratulations to you!” Sample said, after conferring the degrees to the candidates presented by Provost C. L. Max Nikias. A flock of doves then was released over the crowd. The birds regrouped, flew higher and headed to their base in Norwalk.

Sample continued, “This morning our graduates have joined the ranks of our alumni: talented men and women whose intellectual, professional, cultural and civic contributions benefit society both here in the United States and around the world � men and women whose achievements bring luster to USC and the entire Trojan family.”

A Sparkling Day for the Class of 2007

If you think you’ve noticed an increase in fireworks recently, you’re right. Doctors at LAC+USC Medical Center warn people to celebrate the Fourth of July safely amid a sudden rise in major injuries.

COVID-19 | Update on undergraduate classes for fall, including scheduling and on-campus housing

Given continuing safety restrictions and limited densities permissible on campus, the university is recommending that all undergraduates take their fall courses online, and reconsider living on or close to campus for the fall semester.