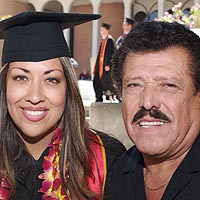 Lucy Flores and her father Jose

It seems impossible that the polished, engaging, thoughtful woman who is headed to law school in the fall at the University of Nevada, Las Vegas could have been stealing cars at the tender age of 13. Or shoplifting, running away from home and running with what could charitably be called the wrong crowd.

But dramatic turnarounds do happen, and Lucy Flores, an honored political science major in USC College, has a turnaround worthy of a movie.

One of the youngest of 13 children, she dropped out of high school, as did every one of her siblings except one. But she had been identified as talented and gifted in elementary school. That identification, and a parole officer who believed in her, helped her begin the long journey to a stellar academic career at USC, which she managed despite holding down as many as four jobs while here.

She starts to tear up when she talks about how her father, Jose, took out a home loan when tuition was due before her first student loan arrived. At the time, she was such a greenhorn that she didn’t even know the difference between “graduate” and “undergraduate.”

But let her tell the story. A few weeks ago, she was awarded the John R. Hubbard Award from the USC Mexican American Alumni Association for being an outstanding student. Her powerful thank-you speech, which tells more about her background, can be read at https://www.usc.edu/uscnews/stories/13875.html

In her junior year, Joelle Emerson stood before a crowd of 600 people at USC and spoke courageously about the night a year earlier when she was drugged and sexually assaulted while on an overseas trip.

Emerson was executive director of USC’s Take Back the Night rally, where people unite each year to protest against rape and other violence against women.

Displaying an inner strength that at times surprised even herself, Emerson turned trauma into an experience that would help other women. She overcame the ordeal with exceptional grace and went on to achieve academically as well.

Emerson graduated with a bachelor’s degree in political science and sociology at USC College. She was awarded the Order of Laurel & Palm, the highest honor given to graduating seniors.

She earned the award in part for her contribution to Take Back the Night, but Emerson also was associate director of the Women’s Student Assembly and president of the Blackstonians Pre-Law Honor Society. She was a Thematic Option honors student who made the Dean’s List her entire four years at USC. Her GPA was 3.9.

After graduation, Emerson’s parents, Randy Emerson and Bonnie Sedlmayr-Emerson, beamed with pride at their youngest of three children. Bonnie, a cancer survivor, said her daughter is an inspiration. Both parents attended the Take Back the Night rally when Joelle gave her speech.

“She spoke from her heart,” Bonnie said. “She’s able to share that part of her life to give other girls strength. The power of one person is extraordinary.”

Joelle will spend the next year developing grant proposals at People Assisting the Homeless (PATH), a nonprofit agency in Los Angeles, and then will attend Stanford Law School.

Emerson reflected on how far she has come.

“A lot of women who’ve been sexually assaulted turn to alcohol or drugs or drop out of school,” she said. “There are so many paths I could have taken … I have a passion and fire that I didn’t have before.”

The most popular big man on campus undoubtedly was Tommy Trojan. If his bronze muscles looked oiled up for his endless photo op, well, it’s because they were. Employees at USC’s Facilities Management Services confirmed that Tommy had a little work done before graduation. “Stainless steel polish” was the spa service he received, a treatment he also enjoys before Parents Weekend and Homecoming. (He goes under wraps before the UCLA game, but that’s another story.)

Many graduates chose to pose singly, next to the chiseled words on his base that spell out “The Trojan.” They stood tall, moving slightly to their left so the words “faithful, scholarly, skillful, courageous, ambitious” would be visible in the photo. Others got ready for their close-up at Tommy’s feet, often creating an action shot by tossing their caps in the air.

One group of friends from USC Viterbi � a hodgepodge of electrical engineering, biomedical engineering and computer science majors � met at Tommy immediately after the main ceremony for one last hurrah. Throwing their caps skyward, they celebrated the end of late nights in front of the computer and early mornings in the lab.

For Vivek Patel, it was also a time to capture a rare moment with his family. His mother and father, Vinaben and R.K. Patel, and his brother Apurva, flew in from Gujarat, India for commencement. But they’re not about to hop back on a plane for the long ride home � they turned Vivek’s milestone into a month-long family celebration. What’s next? “Vegas and Chicago!” Patel said with a grin.

Marilyn Flynn, dean of the USC School of Social Work, and other school dignitaries handed out the diplomas for all of the school’s graduates during the ceremony on the second floor of the Lyon Center. All except one.

When it was time for Bobby Ray Gilmore II to receive his MSW, the proud person handing him his diploma cover was his mother Sharon, a 21-year employee of USC who is a community service officer in the Department of Public Service. Sitting in the center of the front row, wearing a USC shirt and beaming, was his father, Bobby Ray Gilmore. Gilmore (the second) earned his B.A. in 2005 from USC in broadcast journalism, with a minor in sociology.

When Gilmore found out that his mother would be handing him his diploma, he was speechless. “I am really blessed to have my mom and my dad behind me,” he said. “This is the culmination of six years of hard work, blood and tears.”

Gilmore did an internship at Foshay Learning Center, where he helped start a program called Choices to help steer students away from delinquent behavior. He is now employed at Foshay, the school his mother attended. “When I’m there, I always think that these are the same halls my mother walked.” He hopes to become a middle school therapist.

As Gilmore prepared to walk across the stage, he had kind words for clinical assistant professor Valerie Richards. “She’s meant the world to me. She would pull me into her office to talk. It made the school seem smaller and more personal. As a student, you always need someone in your corner and she was that person.”

Trojan Knights are known for their service to the community, and you would be hard pressed to come up with a better Trojan Knight than Jorge Soriano, who came to USC after serving his country as a Marine in Kuwait and Iraq.

He served in the Marines from 1997 through 2001 and had begun community college when he was called back to service after 9/11. After another year at Camp Pendleton, he was sent to Kuwait. He was there when the war in Iraq began, and his unit crossed the border and headed to Baghdad, where it took over the U.N. compound. Soriano was in charge of a security team and stayed in Iraq until June 2003. The day after his discharge, he was back at community college. It was an abrupt transition, but it kept him from dwelling on the war, he said.

Soriano grew up in East Los Angeles and Ontario, and came to USC as a sophomore after earning a perfect 4.0 GPA from Mt. San Antonio College. Raul Vargas, the longtime head of USC’s Mexican American Alumni Association, was instrumental in Soriano becoming a Trojan. So was a Marine buddy, Rodrigo Sanchez, who graduated from USC in 2005. Soriano has returned the favor, convincing another Marine buddy, Mario Gonzales, to enroll in 2006. He’s currently working on converting yet another Marine friend to the life of a Trojan.

Soriano, who graduated with honors with a B.A. in economics, spent countless hours at USC talking to high school students in the neighborhoods surrounding the campus, urging Latinos and other underrepresented groups to consider college as a viable option. This outreach was conducted through Chicanos for Progressive Education, a USC group dedicated to expanding horizons.

He also founded Lambda Upsilon Lambda, the first West Coast chapter of a Latino fraternity based in community service. Although it has only 13 members, the group won the “Greek Organization of the Year” honor this year during the Tommy Awards.

Soriano has a job lined up as a financial adviser in West Los Angeles, and graduate school is a future possibility. Ultimately, he’d like to teach at the high school or community college level. “So many people have paved the way for me that I feel I have an obligation to give back,” he said.

Mike Ward is going to spend his summer vacation working on his tan � his “wicked farmer’s tan,” he said, rolling up his shirt sleeve to show the contrast of his deeply tanned forearm with his ghostly white bicep. But he won’t be relaxing by a pool. On May 17, Ward hopped on his bike in Virginia Beach, Va., for a tough trek across the United States ending in Canon Beach, Ore., as part of Bike & Build, a nonprofit organization that sends 18- to 25-year-olds on cross-country cycling trips to raise awareness about affordable housing.

Ward will travel through 12 states in nine weeks, stopping in communities to work on housing projects, give speeches and presentations about affordable housing issues, and to sleep in recreation halls, churches and community centers. He raised $4,000 for the trip, half of which funds his journey and half of which is donated to affordable housing organizations like Habitat for Humanity.

An avid biker and outdoorsman, Ward knew he wanted to take a monumental bike trip after graduation, and Bike & Build allowed him to couple his love of biking with his interest in construction. “I want to build my own home someday,” said Ward, who spent part of his sophomore year on an environmental field studies program in Kenya through USC’s Office of Overseas Studies.

Ward, who received his B.A. in cinema-television production from the USC School of Cinematic Arts, seriously began cycling two years ago and has been training on bike paths in Santa Monica, where he lives with friends.

At the end of his journey, he will return home to Portland, Ore., where he will continue to make movies and work on his application for graduate school to the American Film Institute in Los Angeles.

Thoughts From the 2007 Graduates