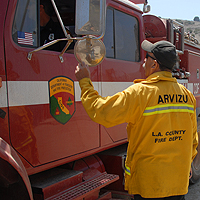 USC alum Bruce Arvizu of the L.A. County Fire Department oversees the loading of fire trucks onto a barge at Big Fisherman’s Cove.

USC staff and scientists on Catalina Island took quick action during the recent wildfire and were able to save the experiments, fish and other sea creatures that are part of their work.

The USC Wrigley Marine Science Center has resumed business � even if it’s not quite business as usual � following the May 10 wildfire.

Some semblance of normality was restored to the USC facility on May 14 shortly after two large diesel-powered generators were delivered by barge.

Though the fire never came within 10 miles of the facility, it incinerated miles of transmission cables and 150 power poles, leaving Wrigley Institute staff on the island without phone, Internet and electrical service a few hours before sunset.

The marine research center is operated by the Wrigley Institute and is part of USC College.

Institute scientists who live on the island relocated with their children to a hotel near Long Beach. Construction workers building a new conference facility at the USC site were sent home. A group of visiting students from Northeastern University in Massachusetts had to leave with their instructor and finish their marine science experiments in a lab at UC Santa Barbara.

Recirculation pumps on an educational “touch tank” were down, so staff moved starfish and sea urchins out of the tank and back to their native waters in the adjacent Big Fisherman’s Cove.

The staff took oysters � part of a long-running experiment on genetic expression � and hung them in baskets from the side of skiffs moored near the waterfront. They even wired a submersible bilge pump to a truck battery and used it to fill a giant tank with seawater that would refresh water in tanks filled with white sea bass.

The improvised “bucket brigade” kept the fish alive and maintained the continuity of an experiment that’s more than a year old.

Staff worked to save experimental samples stored in refrigerators and freezers on the island. Some of them included DNA samples in special freezers that operate at minus 80 degrees Centigrade. The samples were taken out of the freezers, packed in dry ice, hauled to the mainland and carried onto the main USC campus on May 11 while commencement was under way.

John Heidelberg, associate professor of biological sciences in USC College and a resident of the island, ran small generators non-stop to keep other refrigerators on the island working.

“The island staff did a heroic job,” said Tony Michaels, director of the USC Wrigley Institute for Environmental Studies and a professor of biological sciences in the College. “They saved the living organisms we’re holding at the lab, and they saved the samples in our refrigerators � and the freezers had a decade worth of science in them.”

With the help of the two truck-size, diesel-powered generators, the Wrigley Marine Science Center is running at something close to full capacity.

The facility’s Catalina Hyperbaric Chamber is operational as are the kitchens at the cafeteria. The disruption in phone and Internet connections remains, but satellite telephones are offering some link between the island and the mainland. (Soon after the fire broke out on May 10, connections for digital cell phones went down but USC College biology doctoral student Pauline Yu was able to reach the mainland using an older analog cell phone.)

“The full repair of the power and phone systems will take months,” Michaels said. “Jury-rigged communications may be up in another week or so, and when that happens, we will be functioning as usual. The first of our summer researchers arrives on May 21, and we should have all of our systems back in place by then through one mechanism or another.”