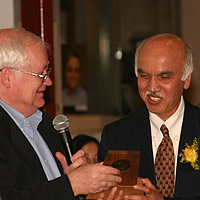 Organic chemist G.K. Surya Prakash’s deft manipulations of molecules and atoms, most notably of hydrogen, carbon and fluorine, have led to many advances in research and industry.

He recently earned major recognition from the Southern California Section of the American Chemical Society, which awarded him the 2006 Richard C. Tolman Medal for outstanding contributions to his field.

A professor of chemistry in USC College, Prakash holds the George A. and Judith A. Olah Nobel Laureate Chair in Hydrocarbon Chemistry and is scientific co-director of the USC Loker Hydrocarbon Research Institute.

The medal is named for distinguished Caltech scientist Richard C. Tolman, who in 1917 famously showed that the electron was the charge-carrying particle in metals. Since 1960, the medal has been awarded each year to a Southern Californian for broad achievements in chemistry. Tolman Medal recipients include seven winners of the Nobel Prize.

Nobel Laureate George Olah, a USC Distinguished Professor, holder of the Donald P. and Katherine B. Loker Chair in Organic Chemistry and the 1991 recipient of the Tolman Medal, nominated his former student and longtime colleague for the honor.

“It is a great personal pleasure and wonderful occasion to congratulate Surya Prakash for the Tolman Medal, an award with a very distinguished history,” Olah said. “I’ve been blessed to have an association with him for over 30 years. In addition to his research and contributions to science, he is a great teacher and, most importantly, a great human being and colleague.”

In a lecture following dinner, Prakash provided an overview of more than 30 years of research in organic chemistry, giving special attention to his work with the dynamic fluorine atom. He called his relationship with fluorine chemistry one of his life’s greatest love affairs (the other, he was quick to note, was with his wife, Rama, who along with his grown children, Archana and Arjun, attended the dinner.)

“Fluorine is a small atom with a big ego,” Prakash told the crowd.

From Prakash’s perspective, that big ego is deserved. Despite the volatile, reactive and, under some conditions, explosive nature of fluorine, chemists have found a bevy of uses for the element.

Prakash discussed many examples of today’s “ubiquitous” fluorinated compounds, from drugs that battle cancer, malaria and depression to pesticides relied on by farmers and coolants that do not harm the ozone layer.

Working with fluorinated materials successfully, Prakash said, requires constant attention to and understanding of “conditions, conditions, conditions.” By controlling conditions such as temperature and solvent, fluorine can allow chemists to do “chemical acrobatics,” he said, creating scores of potentially valuable and less-polluting new compounds.

Prakash’s pioneering work developing new ways to add fluorine to organic compounds has been critical to the boom in fluorinated molecules over the last few decades.

Among many other important chemical discoveries, Prakash and his colleagues’ work has yielded a method for converting natural gas to hydrocarbon liquids and a high-efficiency, zero-emissions fuel cell that converts methanol to electrical energy.

A prolific scientist and writer, Prakash holds 21 patents, has published more than 550 scientific articles and co-authored or edited eight books and monographs, including a major volume on fluorine chemistry. Written with Olah and USC’s Alain Goeppert, his most recent book, Beyond Oil and Gas: The Methanol Economy (Wiley-VCH, 2006), has attracted attention from both the scientific and mainstream media.

Prakash has earned national and international acclaim for his work.

This year he received the Distinguished Alumnus Award from his alma mater, the Indian Institute of Technology in Madras. Closer to home, he won USC’s Research Excellence Award and the Phi Kappa Phi Faculty Recognition Award for Research and Scholarship.