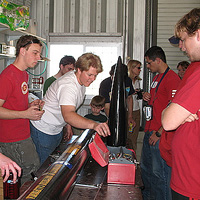 Astronautics students in the USC Viterbi School of Engineering prepare Del Carbon for its April launch.

Forty-five pounds of carbon fiber, Kevlar and solid rocket propellant shot into the clear, blue sky, soaring to more than 18,000 feet above California’s Mojave Desert in April before plummeting safely back to the ground by parachute.

This was the third successful launch in two years for Del Carbon, a demonstration flight vehicle built from scratch by USC Viterbi School of Engineering astronautics students in the USC Rocket Propulsion Lab.

Named for its carbon-fiber construction and a menu item at the students’ favorite fast-food restaurant, Del Carbon was baked in an oven big enough for a “really big pizza,” according to sophomore David Reese.

It first flew in May 2006. After the success of that test flight, Del Carbon, with its hand-polished aluminum nosecone, was given a more powerful engine and launched again in October. That time, it reached an altitude of more than 21,000 feet.

Reese, a rocket hobbyist since age 8, eagerly responded when Daniel Erwin, professor of astronautics, asked his students about their interest in forming a student-run research organization to design, build and test composite airframes.

Many of the respondents are still part of the core group that includes freshmen and grad students. Ian Whittinghill, a senior with years of rocket-building experience, has led the group since its start.

The April flight tested two new systems. The CanSat payload (small enough to include a soda can) carried a global positioning system to record information and log it into flash memory. For this flight, the students replaced the nosecone aluminum with lightweight Kevlar to allow penetration by the GPS signals.

The flight also tested a dual-stage parachute system. The purpose of the two stages is to accelerate the rocket’s descent and make it less vulnerable to drifting in the strong desert winds.

“It’s like nothing else in the world. You’re getting hands-on experience with what you learned in class and pushing the limits of what can be done,” he said.

Thomas, who manages the lab, enjoyed the chance to work with other engineering students.

“It’s fun to travel with the group, and the hands-on experience is great. The skills you learn help you get a job in the future,” she said.

Both she and Reese have summer jobs at NASA’s Jet Propulsion Laboratory.

Del Carbon is being retired after three successful flights. Thomas is coordinating the Rocket Propulsion Lab’s move to a new location where the group plans to develop a hybrid propulsion rocket with the goal of reaching an altitude of 100 kilometers � the boundary between the Earth’s atmosphere and outer space.

It Is Rocket Science