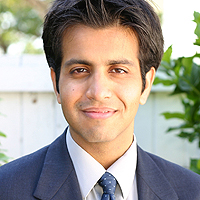 Sachdev, who founded an Internet company in high school, will study at Stanford this fall.

At the age of 13, Sean Sachdev was recognized by Microsoft as one of the youngest certified engineers in the world.

“I didn’t mind being the only kid,” said the USC senior, now 21, who this spring received the Rose Hills Foundation Science and Engineering Fellowship.

Sachdev will earn the $5,000 award this summer by conducting aging research in the labs of USC professor Kelvin Davies before joining the Stanford University School of Medicine this fall.

The transition from teenage technophile to medical student was a gradual process abetted by supportive faculty from the USC Davis School of Gerontology.

In high school, Sachdev made strides beyond his years, founding an Internet company, ScopeCom, which built e-commerce Web sites throughout the United States and the United Kingdom. Several of his clients, including International Sales Management Consulting and College Pathways, are still in business.

Although Sachdev was earning money, sitting alone for hours made him realize how much he valued human contact. The desire to make personal connections and his growing love of science led him to medicine. After enrolling at USC as a Trustee Scholar and earning acceptance into the Baccalaureate/M.D. program, which guaranteed a spot at USC’s medical school upon graduation, he needed to select a major.

“A gerontology student adviser took me up to meet Dr. Davies on the third floor (of the Andrus Gerontology Center) to tour his lab. He encouraged me to do research with him,” Sachdev said. “That sealed the deal.”

He worked on RCAN 1, a protein discovered in Davies’ lab, which Sachdev described as “cutting edge.” Together, professor and student co-authored a review, a rare feat for an undergraduate.

“Sean Sachdev is one of those bright and enthusiastic young people who make being a professor such a joy,” said Davies, the James E. Birren Professor of Gerontology and Professor of Molecular and Computational Biology. “I have had the privilege of participating in Sean’s education, and I have probably learned as much as he during the process.”

Gerontology fulfilled Sachdev’s need to conduct clinically relevant translational research, work that would have a direct effect on the well-being of people and be more fulfilling.

Sachdev believes his undergraduate education sets him apart from his peers who also plan to become physicians.

“The medical schools I interviewed at liked the idea that I studied gerontology and were impressed with my awareness of the biological and sociological issues surrounding the field,” he said. “I took courses that dealt with human physiology, dementia and socioeconomic issues facing older adults.”

Sachdev credited classes he took with Jon Pynoos (“Policy, Values and Power in an Aging Society”) and Gerald A. Larue (“Ethical Issues in Geriatric Health Care”) as some of the best of the past four years. A required internship at a senior center in Cerritos also turned out to be an enriching experience.

As a double major in biology and gerontology, Sachdev had to choose between graduation ceremonies. After working on the third floor and attending classes on the second floor of the Andrus Center, he decided to attend the USC Davis School commencement.

“The great part of the Bacc/M.D. and studying gerontology was that there was no pressure. They allowed me to live my college life passionately doing only what I wanted to do,” Sachdev said. “I had a great four years of college. The best four years of my life, and I hope medical school is the same.”

From Teen Technophile to Med Student