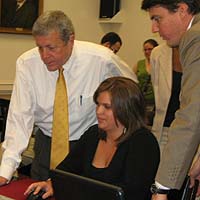 An interactive media research team from USC, supported by members of Congress from both sides of the aisle, launched The Redistricting Game on Capitol Hill on June 13.

Joined by Rep. John Tanner (D-Tenn.) and leaders from a coalition of political reform groups, professor Chris Swain from the USC School of Cinematic Arts used the game to show how gerrymandering � the crafty manipulation of district lines � can yield skewed victories for either party, effectively allowing politicians to choose their voters instead of voters choosing their politicians.

“If you think electronic games are just an idle amusement, you should think again,” Swain said. “They are one of the most pervasive and powerful means for communication in this age. The Redistricting Game builds on that: educating, informing and motivating people to take action who otherwise might never have known the challenge gerrymandering poses to our democracy.”

Deriving its operating rules from current regulations, the game enables players of all ages and partisan beliefs to see how redistricting works, how it is manipulated and how it adversely influences the U.S. political process.

“The Redistricting Game will help people understand how broken the system is,” said Tanner, author of “The Fairness and Independence in Redistricting Act” (H.R. 543). “When politicians can choose their voters instead of the voters electing their representatives, the result is a shrinking political center in Washington where fewer members feel compelled to break the divide and put the needs of the American people ahead of their political parties.”

Congressman Zach Wamp (R-Tenn.) who supports the game but was unable to attend the session due to a scheduling conflict, said, “The game is an interactive tool that illustrates how the current redistricting process works and how it can be abused. It demonstrates the flaws in the current system and why reform � like the bill I co-sponsored with Congressman Tanner � is necessary.”

Featuring fictional characters such as Democratic Congressman Tyree Hugger and Republican Congresswoman Val Hughes, the game provides hands-on understanding of the real redistricting process, including the drawing of district maps and interaction with party bosses, politicians, citizens and the courts.

In addition, the game provides details on a variety of reform measures � including a playable version of H.R. 543 � as well as features that allow users to get involved in the public discourse: communicating with citizens online; spreading the word; and writing their political representative directly from the game.

The USC project is “a funny and insightful game that sheds light on redistricting and the complexity � yet necessity � of reform,” said John Anderson, former independent presidential candidate and chair of FairVote.org.

Joining FairVote.org at the event were representatives from the Campaign Legal Center, League of Women Voters and other reform groups.

Since its summer launch, the game has been featured on CNN and in other national media. The game’s Web site, http://www.redistrictinggame.org, has recorded some 13.5 million page views, according to Swain.