Physical chemist Hanna Reisler was the only tenured female faculty member of the Department of Chemistry when she joined USC in 1987. Ten years later, she was still the only woman in the department.

So when an anonymous USC alumnus donated $20 million to the university in 1999 to address this gender disparity in faculty hiring, Reisler and fellow USC scientists Sarah Bottjer and Chiara Nappi saw an opportunity. The university could use that money to increase the number of women in tenure-track STEM faculty positions. At the time, there were only three at the USC Viterbi School of Engineering and 12 at the USC Dornsife College of Letters, Arts and Sciences.

“When we started, there were several departments in the engineering school that did not have a single woman faculty member,” Reisler said. At USC Dornsife, the physics, mathematics and chemistry departments had only one.

USC put together a task force to find out how to increase those numbers, with valuable input from its female faculty members. The result was Women in Science and Engineering, or WiSE, a comprehensive initiative that is now 20 years old and has contributed significantly to the number of women teaching and learning STEM at USC.

WiSE offers a slate of programs that cultivate the talent pipeline, from female undergraduate students to doctoral candidates and postdocs and ultimately faculty. More than that, WiSE has created a multidisciplinary community of USC professors who mentor and support each other as well as collaborate on research projects.

Among the programs that have come out of WiSE include support for graduate students to continue their program during and after a pregnancy or adoption, stipends that pay for undergraduate students to be exposed to hands-on lab research experience, and an annual symposium where professors can showcase their research while connecting with potential funding sources.

When we started, there were several departments in the engineering school that did not have a single woman faculty member.

One of the signature programs is a monthly faculty networking lunch series that started back in 2000. The lunches enabled female faculty members who may be the only women in their department to connect with other women pursuing STEM disciplines at USC.

“It has resulted in a really positive culture,” said Leana Golubchik, director of the WiSE program and professor of computer science with a joint appointment in electrical and computer engineering. She was the sixth tenured or tenure-track female faculty member at USC Viterbi when she started in 2002. Now there are 37.

Those lunches result in collaborative research projects, mentoring and long-lasting friendships. They also serve as a space where faculty can talk about issues they’re facing.

For example, when K-12 schools were shut down in much of the nation during the COVID-19 pandemic, mothers disproportionately handled child care. According to the Pew Research Center, in households with children in which both parents worked from home during the pandemic, moms were twice as likely as dads to report handling a lot of child care duties.

“We design our programs with the goal of clearly identifying what are some of the barriers that hinder advancement and target our funding to remove those barriers,” Golubchik said.

Over the last 20 years, WiSE has gone through several evolutions to meet changing demands.

When the program began, it mainly focused on increasing the number of female faculty. The guiding principle, Reisler said, was not to allocate faculty slots specifically for women; they wanted to seek out top candidates who included women. The strategy was to create the largest applicant pool possible. Since each USC department has its own recruitment and hiring process, WiSE had to work with each one to find out what worked for them. 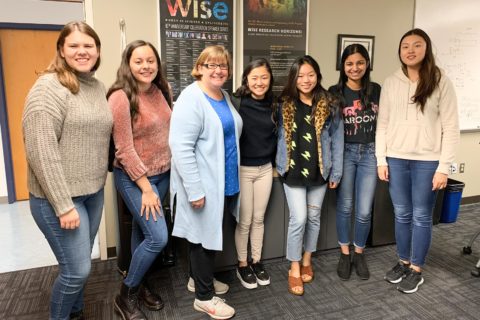 In some cases, WiSE helped departments establish symposia for promising doctoral candidates to get them acquainted with USC. They also supported departments to actively recruit in academic conferences and targeted midcareer candidates.

Once the numbers of female faculty began to increase, WiSE evolved to build up the talent pipeline by working directly with students.

“The program has been focused on academics, but you have to fill the pipeline right,” Golubchik said. “So you’re not going to increase faculty nationally if you don’t support the pipeline.”

Jessica Parr, who graduated from USC Dornsife in 2007 and is now an associate professor in the chemistry department, began developing student programs for WiSE in 2010.

Parr remembers working with Reisler as a student. Now, as a fellow faculty member, she has made connections through WiSE that have helped her career. She experienced its benefits as a support system.

You’re not going to increase faculty nationally if you don’t support the pipeline.

But each generation of up-and-coming scientists and engineers goes through a different experience. Today, female students in STEM majors are no longer concerned about being the only women in their cohorts, WiSE faculty said. As such, mentors now guide students through the process of securing research positions in established faculty members’ labs and programs. They want to expose as many students as possible to hands-on research.

Another initiative is to broaden undergraduate students’ perception of the career possibilities within STEM. Parr noticed that a lot of incoming freshmen who are interested in science gravitate toward pre-health because that’s what they were told about in high school.

But STEM degrees can lead to jobs in aerospace, analyzing components for spaceships or satellites, working on drones, discovering new materials, researching new medicines or working for tech companies like Google, she said.

They can also lead to academia. Women who have gone through the WiSE program have gone on to teach at universities throughout the United States. Some have even started their own companies.

As WiSE prepares for its next 20 years, some of its members see opportunities for growth. They’d like to further develop the talent pipeline with more outreach to girls in middle and high school, for one.

WiSE already does some of that work with its Young Researchers Program, which brings inner-city high school students to USC to conduct research with faculty and graduate students.

At USC, efforts to interest female high school students in engineering already have paid off: In 2019, women comprised half of USC Viterbi’s entering undergraduate class for the first time.

But Golubchik and Parr said they’d like to see young women gain even greater exposure to science and technology. Girls often start hearing in their early teens that math and science are for boys, so it’s important to reach out early.

Said Parr: “I would like to do more programming with middle school girls to try to encourage them if they are interested in pursuing a STEM field.”

The Women in Science and Engineering program at USC has recruited a record number of women faculty to the university and enabled a generation to advance their careers in the sciences.

At the graduate level, the engineering school leads the nation with almost 2,000 women in its master’s and doctoral programs.

Speaking at a symposium held in her honor last month, USC Professor Hanna Reisler recalled the early days of USC’s Women in Science and Engineering program.

For 20 years, WiSE has helped women find a place in science and engineering at USC