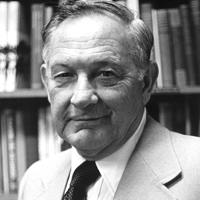 USC dedicated the 100th commencement program to Hall in 1983.

A memorial service will be held June 30 at 1:30 p.m. at the Westwood United Methodist Church, 10497 Wilshire Blvd., Los Angeles.

Hall’s career as a professor of physical education and grand marshall of USC’s commencement exercises for 27 years were “outstanding contributions to the life of this university,” said Elizabeth Redmon, executive director of the Emeriti Center, in 2004 when Hall was given the Leibovitz Award for Distinguished Volunteer Service to Seniors.

Hall’s granddaughter, Michele Jones, accepted the award for her grandfather. “He has received many awards in his career,” Jones said, “but none has ever meant more to him than this one, which is … awarded by his fellow faculty members.”

After serving as a professor and chairman of the physical education department, Tillman later returned to USC to head the Emeriti Center from 1989 to 1996. He formed the Retired Faculty/Staff Benefits Committee, began the project of videotaping interviews with influential retirees and established the USC Emeriti College.

“Tilly’s real vision came from the recognition that retirees best serve themselves by serving others,” Redmon said.

Distinguished Professor Emerita Frances Lomas Feldman said Tillman “was ahead of his time in constructing exercises that would help older people maximize their physical and mental health.”

Hall was born in Faxon, Tenn., in 1916. After graduating from Pepperdine University and serving in the Navy during World War II, he earned his master’s and doctorate degrees from USC.

Hall was active throughout his life. He played semi-pro baseball and earned a basketball scholarship to Pepperdine. He was a Golden Glove boxer, an avid fly-fisherman and golfer. In 1950, he founded the dance troupe known as The Lariats. Under his direction, the troupe performed in all 50 states and 13 other countries.

He was a respected international lecturer who wrote nine books and edited 29 others. He was appointed to the California Commission on Aging by then-Gov. Ronald Reagan and served as USC’s delegate to White House conferences on both physical fitness and aging. He was the grand marshall of USC’s commencement exercises from 1955 to 1982. In 1983, the university dedicated the 100th commencement program to him.