Two sisters came to USC with hopes of making a better life for themselves. If you hear them tell their stories, you might be amazed they made it to college at all.

Both had been in and out of juvenile hall and foster care. As teenagers, they became single moms.

And both left USC with bachelor’s and master’s degrees in 2019.

Twin sisters Carmen and Lucero Noyola worked hard. But they never pretend they did it on their own. They credit much of their success to their USC supporters at Trojan Guardian Scholars.

When they felt overwhelmed, alone or unsure where to turn for help at USC, friends at the program, known informally as TGS, stepped in to guide them. The initiative has helped hundreds of college students who went through homelessness or foster care. Jasmine Torres — a former foster youth who became a student at USC — founded Trojan Guardian Scholars some seven years ago. 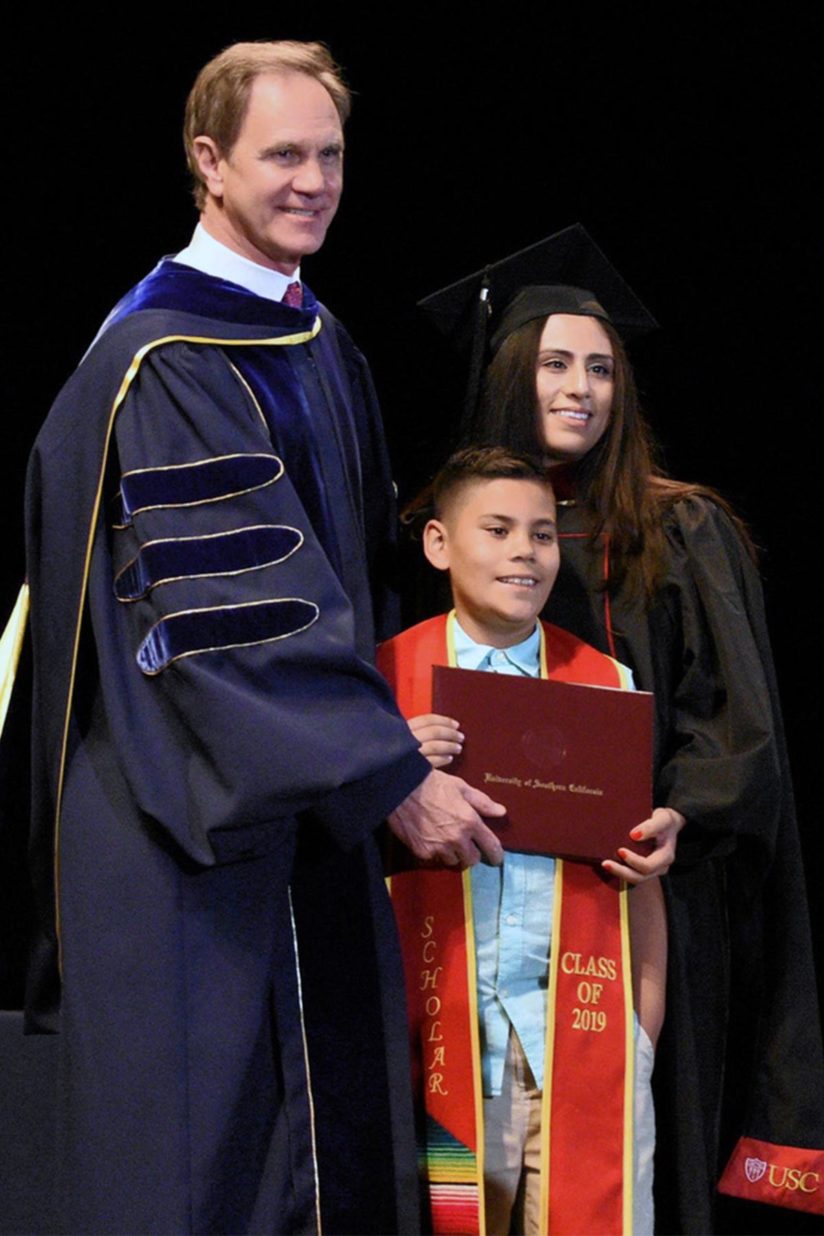 Carmen Noyola brought her son, Adam, on stage to accept her degree from Jack Knott, then-dean of the USC Price School of Public Policy. (Photo/Courtesy of Carmen Noyola)

Now that the two sisters are alumni, they have a chance to give back. They recently had the opportunity to donate money to a deserving organization as part of a fellowship in a national philanthropic network, and they knew right away what to do.

“We love TGS, and we’ve felt its love for us,” Lucero said. “We just want to see it continue at USC. We don’t want people to forget that this community with unique needs still exists.”

Lucero felt stressed and confused about college life when she first arrived at USC. Many college students feel that way, but Lucero faced challenges most classmates didn’t understand.

Growing up in South Gate, Calif., she had been in trouble with the law as a young teen, then lived in a foster care group home. She got pregnant at 18 and had her daughter, Aurora. That gave her a new perspective — and the motivation to pursue education as a way to start anew. Lucero studied hard at East Los Angeles College and transferred to USC.

But she had to commute two hours from transitional housing to get to campus. Aurora needed a babysitter while Lucero took classes and studied. She knew she qualified for government support and resources, but nobody knew how to help.

Then she heard about Torres, another USC student who also grew up in foster care. Torres had just started Trojan Guardian Scholars to support other undergraduates like her. Lucero attended the program’s first meeting and soon got assistance with childcare, financial aid and other resources. She also found companionship and understanding.

“Most of the students we serve have already overcome great difficulty in their life to get to where they are, so our program is really here to help them make sure they have the additional resources and adequate support to be successful while on campus,” said Flavio Guzman Magaña, program coordinator. “There are so many different challenges when students are former foster youth, including how they apply to college and financial aid and other things most students don’t necessarily think about.”

As Lucero began to chart a new path for herself, her twin sister, Carmen, took notice. She also had brushes with the juvenile justice system, lived in foster care and got pregnant as a teenager. She finished high school and took a few community college classes as she tried to provide for her young son, Adam, as a street vendor and retail worker.

It was very much the feeling of family and acceptance — somewhere you could feel comfortable.

She had married her son’s father. But serious relationship issues soon led her to cut off contact and seek a fresh start. Lucero had just been accepted to USC, and Carmen felt inspired.

Carmen charted a similar path: She started at East Los Angeles College and jumped to USC. Trojan Guardian Scholars helped her make an even bigger leap: TGS supporters figured out child care for Adam so his mom could travel for a summer fellowship in Taiwan.

“It was very much the feeling of family and acceptance — somewhere you could feel comfortable,” she said.

That sense of community felt especially meaningful in 2019. Carmen had just completed her degree in nongovernmental organizations and social change at the USC Dornsife College of Letters, Arts and Sciences and master’s in urban planning at the USC Price School of Public Policy. That same year, Lucero also earned her master’s in social work from the USC Suzanne Dworak-Peck School of Social Work, adding to her undergraduate degrees from USC Dornsife in psychology and sociology from 2016.

But because they both graduated in the same year, Lucero could only drop by Carmen’s ceremony briefly before running to her own. Only a few family members could be with them to celebrate their achievement, primarily their kids.

“I was able to take my son on stage with me, which was really nice,” Carmen said. “But the reality is people didn’t understand what was going on.” 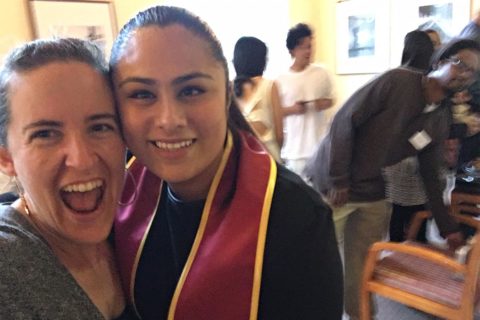 She felt deflated until she attended a special graduation celebration later with supporters, staff members and other students from TGS.

“It felt like there were people there cheering you on and loving on you — people who had supported you all along,” Carmen said. “Now I always really look forward to TGS graduations.”

Lucero had a similar experience. When buying her cap and gown for commencement, she saw many parents purchasing frames for degrees and other special graduation gifts. She would have felt left out, except TGS helped pay for her regalia. The small gesture meant a great deal, she said: “TGS stepped in at that moment as a parent.”

As the Noyola sisters grew and gained new skills, TGS grew alongside them. Guzman Magaña noted the program now serves five times as many students compared to when it began.

“I feel very lucky to have the experience of working with students like Carmen, Lucero and so many others who have overcome so much and found a way to be successful,” he said. “But there’s a lot more work to be done. We need to continue to show others that USC is a school for everybody.”

And Carmen and Lucero are doing their part. They both landed three-year fellowships with the Youth Transition Funders Group. This national network brings together philanthropists, foundations and other funders to support vulnerable young people. As part of their fellowship, the Noyolas helped lead the process of awarding a grant — from searching for deserving organizations to presenting their proposal to the group’s board of directors.

“We knew we wanted to support an organization that was small, grassroots and student-led,” Lucero said. “That’s how we picked TGS.”

The sisters got approval for their plan and recently sent the official donation announcement to TGS. The $6,000 gift will go a long way toward supporting other USC students with similar backgrounds as they pursue their degrees. But the Noyolas know their work must continue.

“We know TGS needs so much more,” Carmen said. “We want to leverage this gift as a way to highlight the program and get more support. This community is still at USC and still in need.”