Like many children of immigrant parents, Betty Thai grew up in the role of cultural navigator.

When it came time to enroll her in elementary school, her parents turned to her to do research and figure out which school to attend. At parent-teacher conferences, she translated between the authority figures in her life, from Chinese to English and back again. When important government documents arrived in the mail, a young Betty pored over the complicated language to figure out what her parents needed to do.

When she isn’t studying international affairs, Thai shares her insight as a first-generation undergrad by mentoring other first-gen students.

“I basically tell them, I’m a resource for you. Any career development tips you need, any questions you have about USC, I’m here.”

“The odds are so stacked against them. If I could help them take this first step toward a brighter future, that made me so happy.”

Thai practiced classical ballet and piano before college. Now she takes hip-hop dance classes online and through the USC Kaufman School of Dance.

During the COVID-19 pandemic, she also practices the harp and kalimba.

The family had to scrimp and save money when she was little, and she often had to look through the household bills. She would point out expensive charges to her mom, only to be told not to worry about it. “But now I knew this information,” Thai remembers, “and sometimes it would stress me out.”

That responsibility at a young age — as a crucial bridge between two worlds — made Thai deeply passionate about understanding cultural differences. It led her to USC, where she pursues undergraduate degrees in political science and East Asian languages and cultures at the USC Dornsife College of Letters, Arts and Sciences. At the same time, she is working toward a master’s in law studies at the USC Gould School of Law.

The senior envisions a career devoted to exploring other cultures and advocating for vulnerable groups around the world. Others recognize her potential and passion, too. She studied abroad in China on a Gilman Scholarship in 2019 and recently received the prestigious Pickering Fellowship, which covers a two-year master’s degree followed by an overseas posting in the U.S. Foreign Service.

“I realized there are a lot of deep-rooted issues, especially facing underserved communities and minorities,” Thai said. “I want to get involved in politics to help solve those issues and address those structural barriers that people like my parents have to face.”

A child of immigrants finds her passion for cross-cultural exchange

Thai’s parents are both from Southern China and speak little English. Throughout her childhood in California’s San Fernando Valley — in places like Northridge, Van Nuys and Granada Hills — her mom was the family’s sole breadwinner.

In China, Thai’s mother had performed with well-known orchestras as a first-chair violinist. When she immigrated, however, she came up against culture and language barriers in the music world. So, she put herself through school and got an associate degree, Thai says. Now she works night shifts at a diagnostic testing company.

Although her mother pushes her intensely to excel, Thai said it makes sense: “She’s the hardest worker I know, sacrificing so much to create a better life for my brother and me. If she’s working this hard, I can do it, too.”

“But it got me fluent in reading, writing and speaking,” she says. “I want to continue that because I want to help the Chinese immigrant community. This is a skill I have, so why not use it?” 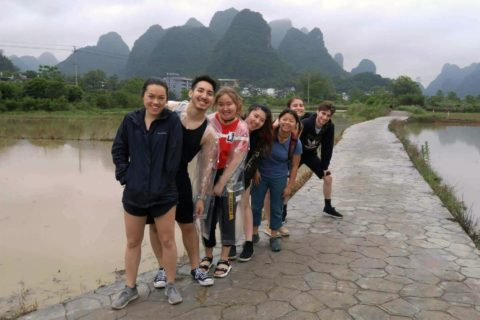 While studying in China on a Gilman Scholarship, Betty Thai (fourth from left) used her Mandarin skills to help her classmates navigate a new culture. (Photo/Courtesy of Betty Thai)

Those weekend studies have already paid off. While studying in China through her Gilman Scholarship, Thai became the de facto translator and navigator for her American classmates. In Chinese language class, she was the only student from the United States, and her peers would ask her about life and politics in America. She’d question them back about their own upbringing and culture.

“I realized there is so much more to this world that I want to see and learn about,” Thai said. “And I loved living internationally. What career would help me advocate for others and continue learning about new cultures and lifestyles?”

The answer came when she learned about the Pickering Fellowship.

When Thai realized she wanted to pursue a career in international affairs, the Thomas R. Pickering Foreign Affairs Fellowship Program became her top goal. The competitive fellowship encourages applications from women, people with financial needs and minority groups that have been historically underrepresented in the U.S. Department of State.

If she earned a coveted spot, her tuition and fees at a two-year master’s program in international affairs or a similar topic would be covered. She would also receive a stipend to cover living expenses and would complete two summer internships — first at the U.S. Department of State, then overseas at a U.S. embassy or consulate. In exchange, Thai would agree to spend at least five years as a foreign service officer after completing her degree.

We need to have these international exchanges to broaden everyone’s horizons.

She sent off her application but viewed it as a long shot. She didn’t even tell her mom she applied until the acceptance letter arrived in her email inbox.

“I told her: ‘Mom, by the way, I think I’m going to accept this to become a diplomat,’” Thai said. “She was so excited. She was a little upset because it means I won’t live near her anymore, but my whole family is very excited.”

After her master’s program, Thai will go abroad for five years, likely in two or three locations. If she still likes the international lifestyle after that, she envisions a career of service in the State Department. Other jobs appeal, too, like working for a think tank focused on international affairs. And she is especially interested in the relationship between China and the United States. 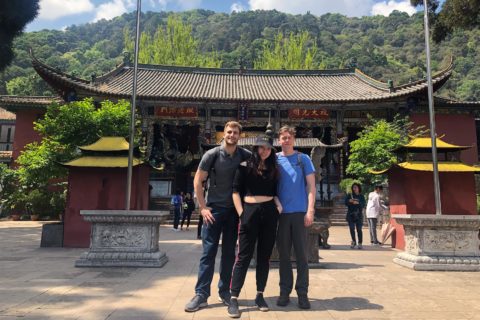 Betty Thai wants to pursue a career in international affairs to help vulnerable groups around the world. (Photo/Courtesy of Betty Thai)

“From what I understand, the U.S.-China political circle is kind of a boys’ club,” she said. “I’m breaking into that boys’ club.”

Thai has been dismayed by certain hardline policies against China in recent years. In a research project she is now turning into a thesis, she examined the importance of cultural exchanges through study abroad programs. Many students who complete those programs go into diplomacy or international politics, she said.

“When they pulled the Fulbright [student exchange program] from Hong Kong, that was the opposite of what my research was telling me,” she said. “We need to have these international exchanges to broaden everyone’s horizons and really understand the other side of the story.”

Thai’s current goal is to become a political officer in the U.S. Foreign Service. She would analyze politics in her host country and send notes and recommendations back to leaders in Washington, D.C.

It would be an opportunity she’s dreamed about for years: “I could influence policies that can help underserved communities on an international scale.”

Graduating senior wants to bring about social change through marketing

International relations major India Sposato has been helping others since she was a child. Now, she wants to do so professionally.

Anne DeSalvo had never been to the Middle Eastern country before; her experience there was not what she expected — in a good way.

✌ Class of 2017: Johanna Reyes is making an impact from Mexico to Cuba, and intends to do even more.

From USC student to the U.S. Foreign Service