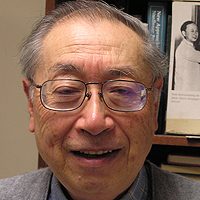 Cheng, who received the USC Viterbi School’s Engineering Research Award in 1982, maintained close ties with his colleagues after his retirement in 1994.

H. K. (Hsien Kei) Cheng, distinguished professor emeritus of aerospace and mechanical engineering at the USC Viterbi School of Engineering, died in his sleep on July 11. He was 84.

Cheng, an early contributor to USC’s reputation for research excellence in flight aerodynamics, published a landmark paper in 1963 on hypersonic flow that was crucial to the design of ultra-highspeed aircraft. He also did significant work in theoretical and computational fluid mechanics, flight hypersonics, geophysical fluid mechanics, bio-fluid dynamics, the hydrodynamics of swimming propulsion and the effects of sonic booms on oceans.

“In addition to his scientific achievements, H. K. was one of the most pleasant and helpful colleagues I have ever had,” said Ron Blackwelder, professor of aerospace and mechanical engineering.

He worked for several years as a research aerodynamicist for Bell Aircraft Corp. before returning as a researcher to Cornell. After a year as a visiting lecturer at Stanford, he became a special lecturer at the Graduate Department of Aerospace Studies at USC in 1964.

By the following year, he was a full professor in USC’s Department of Aerospace Engineering. Cheng retired in 1994 but retained close ties with USC and his colleagues.

Cheng was elected a member of the National Academy of Engineering and a fellow of the American Institute of Aeronautics and Astronautics. He received the USC Viterbi School’s Engineering Research Award in 1982 and was a member of the Phi Tau Ph Honorary Scholastic Society.

During his career, he was a consultant for RAND Corp. and for half a dozen Southern California aerospace companies. He was frequently invited to deliver lectures at American universities around the world.

Cheng is survived by his wife, Wai L. Cheng, and a daughter, Linda Cheng.