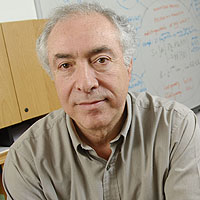 Bars will discuss his theories at a UCLA event on July 29.

Can reality have two time dimensions? It is not only possible but possibly verifiable through experiment in the next 18 months, said USC College physicist Itzhak Bars.

In a paper published this week in Physical Review Letter, Bars adds a prediction to his theory of two-time physics that may allow verification by late 2008 in the Large Hadron Collider, the world’s newest and most powerful particle accelerator.

“If it does show up, then it’s going to be very exciting,” said Bars regarding an undiscovered class of particles.

The paper predicts the existence of massive “superpartner” particles for photons, gluons, quarks, electrons and other known building blocks of the universe.

It is the superpartners that the Large Hadron Collider may be able to detect, if the energy needed to create such particles is within its reach. The interactions of these particles will provide a new arena for tests of two-time physics.

Two-time physics, which also includes a fourth space dimension, sounds like a brain twister. But Bars’ model already explains subtle phenomena in our universe which the ordinary framework of physics has missed.

Bars imagines visible things in 3+1 dimensions (three space, one time) as the shadows or projections of a four-dimensional, two-time universe.

Countless different shadows can occur: But what Bars calls a 3+1 physicist might have a hard time noticing the relationship between the shadows.

“The problem is that one-time physics is not set up to give a clue at all that different dynamical systems could be related,” Bars said.

In Bars’ model, many seemingly distinct phenomena � the orbit of a planet or of the electron in an atom, the motion of the tip of a spring, the free movement of a particle in a vacuum or motion in an expanding universe � are simple examples of shadows of the motion of the same free particle in 4+2 dimensions.

For another analogy, imagine a typical street grid in a city center, with vehicles moving in four directions.

But looking down from above, it is easy to see the intersections, stop lights and other factors that restrict how vehicles move.

In the same way, Bars shows that 4+2 physics reveals hidden relationships in our 3+1 universe.

Two-time physics has been bolstered somewhat by the failure, to date, of the search for the axion, an elusive particle that was predicted to exist by the 3+1 Standard Model of fundamental particles and forces.

“The fact that it has not been found is explained by two-time physics,” Bars said.

In a paper published last year in Physical Review D, Bars showed that the properties of the extra space-time in two-time physics resolve the problems that an axion was supposed to solve � eliminating the need for the particle.

Bars’ model also does not conflict with string theory, currently the leading approach to a unified theory of the universe. Two-time physics can accommodate string theory but does not depend on it, he said.

Bars first proposed the existence of a 4+2 universe in 1998 and has published more than 30 papers on the subject since then.

Bars will speak at UCLA July 29 on “Two-Time Physics: The Unified View From Higher Dimensional Space and Time,” as part of a double bill with author Lawrence M. Krauss (“The Physics of Star Trek”), who will speak on “The Beginning and End of Time: Life, the Universe and Nothing.”

Timing Is Everything for Modern Physics