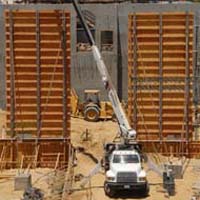 Workers remove the plywood forms from the west, north and south walls, revealing the lower portions of the new complex’s shape.

The confetti from last October’s formal groundbreaking for the new Cinematic Arts complex barely had been cleared before construction crews began burrowing down some 25 feet to excavate the footprint of the massive 137,000-square-foot edifice.

With the former parking lot where the structure is located cleared of pavement, trees and light poles, heavy earthmoving equipment and dozens of dump trucks formed a perfectly synchronized flow through the area, carrying away thousands of yards of soil in a matter of weeks.

In early July, workers removed the plywood forms from the west, south and north walls, revealing the first glimpse of the lower portions of the new complex’s shape.

Tons of girders arrived on site shortly thereafter, with crews driving them upright into the ground and placing beams between them to craft a retaining wall.

Steel formers then laid in row after row of reinforcement bar that will be immersed in concrete to make the foundation. Doug Wellman, USC School of Cinematic Arts facilities manager, said that construction is ahead of schedule and the building is on track for its opening in December 2008.

With the launch of the Cinematic Arts Complex Cam, Trojans can get a bird’s-eye view of the school’s new facilities as they go up on the University Park campus. In addition to accessing live feeds, a person also can view high-resolution still images at https://cinema.usc.edu/complexcam

Getting to the Bottom of It