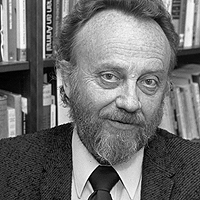 Bohannan is remembered as a Renaissance man with enormous curiosity.

Paul James Bohannan, known as the world’s leading expert on the Tiv of Nigeria, has died. He was 87.

A professor emeritus of anthropology at USC College, Bohannan’s rich body of work as a cultural and social anthropologist ranged from working among the Tiv, a West African tribe, to research about divorce in the United States.

At the College, Bohannan served as dean of social sciences and communications from 1984 to 1987. After retirement, he moved to Three Rivers near Sequoia National Park, where he was writing his autobiography. He had battled Alzheimer’s in recent years and died in his sleep on July 13.

Born in 1920 in Lincoln, Neb., Bohannan grew up in Indiana, Montana and Colorado and attended the University of Arizona. When the United States entered World War II, he left school to enlist in the Army. After the war, Bohannan returned to the UA, where he earned his bachelor’s degree, then became a Rhodes scholar at Oxford University.

After earning his doctorate in philosophy at Oxford, Bohannan studied the Tiv tribe from 1949 to 1953. He lived in a mud hut without plumbing, learned the Tiv language and documented the customs and culture of the tribe, then numbering 800,000.

“I became interested in Africa through my teachers, E.E. Evans-Pritchard, Meyer Fortes and Max Gluckman,” Bohannan said in 1964. “I was, for almost four years, a colleague of the late M.E. Herskovits, some of whose passion for Africa I have absorbed.”

Bohannan returned to the U.S. and taught at Princeton University and Northwestern University, where he focused on African ethnography and helped to build the anthropology department’s study of economic anthropology. He then taught at UC Santa Barbara before joining USC College.

Gary Seaman, associate professor of anthropology at the College, co-authored with Bohannan, The Tiv: An African People From 1949 to 1953 (Ethnografics Press, 2000). Seaman, an expert in the analysis of ethnographic film, used his cutting-edge digital techniques to rescue the badly damaged images that Bohannan had taken during his years among the Tiv. Of the 1,200 black-and-white images, nearly half had been damaged.

“When you’re thousands of miles from technological civilization, you do what you can,” Bohannan told USC Trojan Family Magazine in 2000. “In the heat and humidity of the Nigerian bush, negatives start to molder unless you develop them the same day you take them.”

The rescued, digitized images and Bohannan’s published research on the Tiv provided the foundation for the book, which chronicled life among the Tiv farmers in the last days of British colonial rule. The photographs preserved a record of domestic activities that the Tiv, now numbering more than 2 million, have since discontinued � such as hollowing out tree trunks for canoes.

A former president of the American Anthropological and the African Studies associations, Bohannan was also a member of the American Philosophical Society. His other research projects focused on stepfamilies, aging, law, divorce and American history, among other topics.

Bohannan’s other major works include We, the Alien: An Introduction to Cultural Anthropology (Waveland Press, 1992), How Culture Works (Free Press, 1994), Justice and Judgment Among the Tiv (Waveland Press, 1989), Africa & Africans (Natural History Press, 1973) and African Homicide and Suicide (Holiday House, 1972). For his study on African homicide and suicide, Bohannan won the August Volmer Research Award of the American Society for Criminology.

Seaman remembered Bohannan as a Renaissance man with insatiable curiosity.

“He was extremely energetic and had an extremely wide range of interests,” said Seaman, a faculty member at the College for 25 years. “He was abreast of all sorts of issues. He was an authority on marriage in relation to economic systems; he was an expert on customary law, the ethnography of divorce, the study of kinship. Paul was a man of many parts.”

A connoisseur of fine Scotch whiskey and a man of Scottish ancestry, Bohannan spent each summer in Scotland, where he visited distilleries. He also had other leisure pursuits.

“His real passion was ballet,” Seaman said, adding that Bohannan had an immense videotape collection of classical ballet performances. “He often would remark that if he hadn’t grown up in the time and the place he did, he would have undertaken a career like Vaslav Nijinsky.”

Bohannan is survived by his wife, Adelyse “Lisa”; a son, Denis; and a brother, William. He was predeceased by his first wife, Laura, also a well-known anthropologist, and a sister, Margaret.

Virginia Tufte, 101, gifted teacher at USC Dornsife for a quarter of a century

One of the most celebrated scholars of her time, her fields of expertise were Renaissance poetry, Milton, the history and grammar of English and literature by and about women.

The physician, pathologist and teacher was the first woman chair at USC’s medical school.

The emeritus professor of pediatrics was influential in the establishment of the cancer center.

Do try this at home: Physics comes to life for USC students after special deliveries

USC mailed more than 1,000 lab kits to its college students around the world so they could still do hands-on experiments while studying remotely during the COVID-19 pandemic.

With top 250 countdown, KUSC and KDFC give classical music the California touch

For the first time ever, the USC-owned radio stations are playing back the 250 most beloved classical songs as voted on by listeners in the debut of the Classical California Ultimate Playlist.

The requirement extends to all faculty and staff working on-site through the end of the spring 2021 semester.flu vaccine.