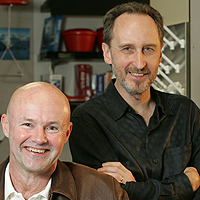 Kinesiologist Casey Donovan, left, and neurobiologist Alan Watts work together to better understand the collaboration of body and brain in metabolism and hunger.

About three years ago, Casey Donovan, professor of kinesiology at USC College, had hit a wall.

His groundbreaking research into the body’s physical sensors for hypoglycemia – how the body knows when there is too little sugar in the blood – had uncovered a surprisingly large role for the hepatic portal vein, which carries blood from the stomach and other digestive organs to the liver.

But the deeper he probed, the more Donovan suspected the brain also was involved in detecting and reacting to hypoglycemia, a sometimes life-threatening condition that affects both athletes and diabetics.

Meanwhile, across campus, Alan Watts, professor of biological sciences and director of the Neuroscience Research Institute in the College, had run into a wall of his own.

His well-known findings on the neurobiology of stress – discovering how neurotransmitters, hormones and neural circuits act in the brain when the body is pushed hard – were stymied by a need to find a stressor that could be easily controlled in the lab.

Although he had found success using dehydration to trigger stress, Watts wanted a process that would help him “delve further into the cross-talk between the brain and body as a way to better understand how we maintain our metabolism.”

Then, in one pivotal week in 2004, Donovan and Watts met – resulting in a partnership that matchmakers only dream of creating. The low blood sugar of hypoglycemia, it turns out, is an ideal stressor for lab studies. It is both controllable and clinically relevant. With Donovan working on the physical mechanisms of glucose sensing and the location of the sensors in the body, Watts could focus on the brain’s role.

Together they are discovering hypoglycemia is anything but simple.

“Despite its importance to diabetics, who are a growing part of the population, surprisingly little is known about how the body actually senses glucose,” Donovan said. “We’ve been locked in a dogma for many years that’s not necessarily wrong but not very complete, where we thought there might be just one sensor.”

Indeed, added Watts, “in the past, many focused on studying pancreatic mechanisms and how you become insulin-resistant, which are critical aspects of diabetes. But now the field is becoming more diverse, more attuned to how the brain plays a role.”

Their research has broad implications. Through the study of hypoglycemia, they hope to understand how the body regulates blood sugar and other aspects of metabolism. These include a better understanding of the processes responsible for why we feel hungry, why we feel shaky if we haven’t eaten and how the body recognizes that it has been fed and is full.

Donovan is an expert on how lactic acid forms in the muscles of athletes during intense exercise. The study of hypoglycemia was a natural next step because it, too, is present when athletes go to the limit. In his work on the hepatic portal vein, he discovered that afferent nerves – nerves that lead to the central nervous system – were involved in sensing when the body’s blood sugar dropped too low.

“We knew the brain was involved, that neurotransmitters like norepinephrine and epinephrine were involved, but we weren’t sure just how high up (in the brain) it went,” he said. To their surprise, “We found a number of areas of the brain activated by hypoglycemia,” Donovan said. “The brain engages different components, different neural circuits, to mediate responses to hypoglycemia.”

In fact, a recent study by Watts and his former postdoc Arshad Khan, now a research assistant professor at USC, revealed new details about how the hindbrain and the paraventricular hypothalamus (a brain area that plays a major role in coordinating feeding behavior and metabolism) help respond to hypoglycemia.

In the short time they have worked together, Watts and Donovan have been extremely productive – their teams have presented findings at the Society of Neuroscience meeting and at the past three meetings of the American Diabetes Association, and they have co-authored articles in the American Journal of Physiology and Endocrinology.

There is much more to come, promised Watts. “These are the kind of results you can only hope to achieve,” he said. “This is one of those great collaborations where things actually worked very well for both of us.”

Next, the researchers will focus on how the mechanisms in the brain work, whether there are different processes for the onset of “slow” or “fast” hypoglycemia (when hypoglycemia develops over an hour versus 10 minutes), and understanding the basic biochemical signals the body uses to detect glucose levels.

Knowing how neurons relay hypoglycemia warnings is critical to understanding the overall glucose sensing mechanism in the brain. For diabetics and athletes, who can experience hypoglycemia with overexertion, the study could lead to ways to react to falling blood sugar before the levels hit a critical point – and impact performance, behavior and health.

Watts noted that the new Center for the Study of Neuro-Metabolic Interactions, funded by the College last February, will help involve a broader group of researchers in efforts to understand how the brain and body work together to regulate metabolism. He and Donovan are now working with neuroscientist Larry Swanson, the Milo Don and Lucille Appleman Professor of Biological Sciences in the College, to map the areas of the brain activated by hypoglycemia.

Other collaborators will include Richard Simerly, director of the Neuroscience Program at the Saban Research Institute of Childrens Hospital Los Angeles, and the Keck School of Medicine of USC’s noted obesity and diabetes researchers Michael Goran, holder of the Robert C. and Veronica Atkins Chair in Childhood Obesity and Diabetes and professor of preventive medicine, and Richard Bergman, Keck Professor of Medicine and chair of physiology and biophysics.

“Over the last 15 years, the rates of diabetes and obesity have soared,” Watts noted. “All of us in science realize we’ve got to talk with each other if we are to figure out why this is happening.”

Watts said the work on hypoglycemia has relevance for other types of research into how the body maintains and controls its energy, as well as how it regulates and stimulates food intake. “The way we look at it in the lab…. This is all part of a larger picture.”

How Sweet It Is