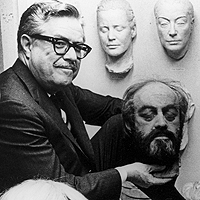 William Tuttle with his collection of masks representing the faces of more than 100 stars as they appeared in film roles.

William J. “Bill” Tuttle, the pioneering makeup artist who received an honorary Academy Award in 1965 for his groundbreaking work in 7 Faces of Dr. Lao and former adjunct professor at the USC School of Cinematic Arts, died on July 30. He was 95.

“Bill was a great teacher who was willing to share anything and everything with his students,” said Professor Emeritus Herb Farmer, who taught basic film technology and distribution classes during Tuttle’s tenure at the school. “He would look at the kids’ work and show them how to improve and make it better. He had no secrets.”

Tuttle created innovative techniques and trained generations of makeup artists during his 35-year career at MGM. In 7 Faces of Dr. Lao, the film that earned him his Oscar, he transformed actor Tony Randall into the seven characters of the title, including a deeply aged and bearded Merlin the Magician, and a Medusa with upper and lower lips of foamed latex meant to create a more feminine appearance. The 1995 book The Technique of the Professional Make-up Artist called the film “a landmark in makeup artistry” that “will forever remain a goal for other artists to accomplish.”

“He was most famous for his ability to make the right decision in faces and heads and accomplish it in such a way that he was able to redo the makeup each day, no matter how long it took to shoot the picture,” Farmer said.

Born April 13, 1912, in Jacksonville, Fla., Tuttle dropped out of school in his teens to help support his mother and younger brother, Thomas, who also would work as a makeup artist in the film industry. At 18, the future Oscar winner moved to Los Angeles and attended art classes at USC where he would later return to teach from 1970-1995.

He donated more than 100 of his masks to USC that feature such famous faces as Paul Newman, Charlton Heston and Laurence Olivier and those used in Lao.

“He helped the kids loosen up and use their imagination,” Farmer said. “He’s a great talent that will be missed.”

Tuttle is survived by his wife of 40 years, Anita A. Tuttle, and his daughter, Teresa.