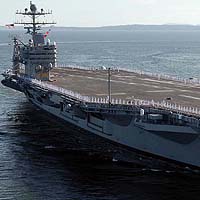 On a warm midsummer morning, five eager Trojans have reported more than an hour early for their assignment. Joining me were Dennis Atkinson, director of corporate relations in the USC Provost Office; Larry Lim, director of pre-college programs at the USC Viterbi School of Engineering; Najm Meshkati, professor of industrial and systems engineering; and John O’Brien, professor of electrical engineering and senior associate dean for academic affairs. Eventually, we were loaded in a van and found ourselves sitting in a conference room sipping coffee and awaiting “the admiral.”

The admiral, a graduate of the Naval Academy who has earned two masters degrees in addition to the one he received from USC, is enormously proud to be a Trojan and has fond memories of the USC campus. He’s also very proud of his young sailors.

“Young people go into the Navy and when they come out, they are adults,” he said. “We want you to recognize the value of what we are doing.”

Kilcline’s mission is to man, train, equip and maintain a naval air force. The Navy has 11 aircraft carriers, 10 carrier air wings (At any given time, at least one carrier is in drydock for maintenance.), 168 squadrons, 25 naval air stations, 3,600 aircraft and 100,000 personnel. We will visit the USS Abraham Lincoln.

After nine months in drydock for maintenance, the carrier was preparing for its next deployment but was still without its regular air wing. During our stay, we saw Navy pilots who completed flight training and were practicing take-offs and landings both in daylight and at night for the first time in the high-performance combat aircraft to which they were assigned.

The tempo of operations for the Navy has been increasing with ships making more high-speed transits, sailors spending more time at sea, more compressed training cycles and fewer port visits.

Aircraft carriers respond to crises, which involve humanitarian as well as military actions. In 1991, for example, the Lincoln was supposed to go to the Persian Gulf in response to Iraq’s annexation of Kuwait but was diverted instead to the Philippines in response to the eruption of Mount Pinatubo on Luzon. The carrier led a 23-ship armada that evacuated nearly 45,000 people from Subic Bay Naval Station.

We were outfitted with lifejackets and “cranials” and strapped into a helicopter. A cranial, a piece of gear with which we will become very familiar, consisted of headgear somewhat like a two-piece bicycle helmet. It protected us from noise and flying debris. After approximately half an hour in the air, my heart leaped at the sight of the Lincoln, 97,500 tons with its 4.5-acre flight deck slicing neatly through the ocean.

Capt. Patrick D. Hall, commander of the Lincoln, is not a Trojan, but he is a civil engineer from the University of Texas who welcomes us warmly. Most of the Navy officers that we meet are engineers.

“I think for college graduates, the Navy does offer a good opportunity and I would recommend it to our students,” Lim said.

We were in the same compartment where the captain greeted President George W. Bush in May 2003 and on the ship where the controversial “Mission Accomplished” banner was hung. The banner is one of the first things that Hall talked about. He explained that the banner was created by the Lincoln’s crew, not the president, and it reflected their pride in what they had done. The Lincoln had been deployed to the Persian Gulf and the deployment had been extended many months. The deployment ended with Bush’s historic visit.

We also heard from Matthew J. Faletti ’83, another Trojan who is chief of staff, Carrier Strike Group 9. Later, when I was seated next to him at supper, I heard his recollections of Dean Yannis Yortsos and professor George Chilingar.

“The education I received from the Viterbi School of Engineering has been a major factor in my professional success,” he said. “I gained far more than a degree in petroleum engineering. I was instilled with a commitment to quality and excellence.”

The Lincoln has two nuclear reactors that power four main engines capable of pushing the ship through the ocean in excess of 30 knots (34.5 miles per hour). It can make 400,000 gallons of fresh water daily and has enough air conditioning capacity to serve 800 homes. It can carry 85 aircraft and with its full air wing has approximately 5,500 people on board, 10 to 15 percent of whom are female. (Women can do anything in the Navy except serve as a Seal or aboard a submarine.) Every day, the ship prepares 15,000 to 20,000 meals and bakes 600-800 loaves of bread. Each day, the sailors consume 13,000 sodas, 600 gallons of milk, 620 pounds of hamburger, 180 dozen eggs, 800 pounds of vegetables and 900 pounds of fruit.

The Navy feeds its sailors very well. Later in the day, the ship’s chief medical officer expressed concern over elevated cholesterol but personally, I was absolutely thrilled to have mashed potatoes and gravy with my hot dog for lunch. There were many other choices available, including lots of healthy stuff. As a nod to health, I ate a salad and only had one dessert … not counting the cookie. The next morning we ate in the chief’s mess (chief petty officers) and all thoughts of health were forgotten, given the choices of bacon, sausage, potatoes, eggs anyway you wanted them, pancakes, French toast, fruit, cereal, juice and industrial strength coffee. One of the chiefs confided to me that they make sure they get all of the talented cooks. That night, we enjoyed an excellent gourmet meal with the captain and his most senior officers that triggered spontaneous applause for the enlisted crew who prepared it. Despite the excellent and varied selections, we did not see any fat sailors.

The Navy personnel took us through the ship, showing us everything from maintenance operations, medical facilities and firefighting operations to the anchor chain. We went up and down countless steep and difficult ladders. Bulkheads lurk ready to smack your head and treacherous knee knockers are everywhere. If we did not have guides, we might still be lost somewhere on board. Even members of the crew said they sometimes get lost. But the Lincoln is not all a warren of cleverly designed compact spaces. Below the huge flight deck lies an equally huge hanger deck used primarily to repair aircraft. It is bigger than a football field and several stories high. There are four elevators capable of moving aircraft rapidly between the hanger and flight decks. Smaller elevators connect the flight deck and hanger decks with the ship’s magazine. During our visit, we saw constant drills as sailors practiced for fires, chemical warfare and other emergencies. We also saw many crew members working out in groups on the hanger deck or using exercise equipment found in alcoves around the ship.

The choreography of aircraft on the flight deck is absolutely amazing. When moving on the flight deck, planes use their own power (with wings folded up), and jet blast is an ever-present danger. They land and take off at the same time and move from parking spaces, elevators, refueling areas and catapults, passing within a foot or two of the edge of the deck, the carrier’s tower or each other. This is controlled by roughly 100 sailors who for the most part are teenagers or in their early 20s. They work as a unit, and everyone knows what they are doing. The deck is redolent with the smell of jet fuel and exhaust. We wore the cranials with ear plugs under the ear muffs, and it was still loud.

Before being catapulted, pilots rev the jets up to full power. The blast of an afterburner is deflected by a concrete section of the deck that is tilted up behind the jet. The afterburner jet blast is hot enough to melt steel. When an aircraft is landing, the pilot hits full throttle as soon as the hook touches the deck. If the pilot misses the cable, he/she needs full power to get back into the air.

After watching night flight operations, including a tour of the tower to see the ship’s navigation and the operations center, we went to our staterooms. The comfortable, compact rooms have two bunks each, a sink and a TV. Sleep did not come easily as the bang of jets hitting the deck, the scream of the machinery controlling the arresting cables and the roar of the catapults continued until 2 in the morning when night flight operations finally ceased. Reveille was at 6 a.m., or in Navy parlance, 0600 hours. But we were revived by the incredible breakfast in the chief’s mess.

Deep in the ship, we saw a machine used to process trash. The Lincoln separates metal and plastics. Then the metal is ground up and plastics are melted and formed into big disks and delivered to recycling centers when the ship is in port. The carriers put neither into the ocean.

The Navy saved the best for last. We departed by being catapulted off the Lincoln in a C-2A Greyhound, a propeller-driven airplane used to deliver supplies and personnel. Passengers sit facing the rear, strapped tightly into their seats. It is like being shot out of a cannon, though it felt unexpectedly smooth. We accelerated from zero to 140 knots (about 160 mph) in two seconds, which was better than any roller coaster ride I’ve experienced.

Landing back at North Island, we met another Trojan, Ryan King (BAIR’03), one of the pilots in the Greyhound squadron.

“I wanted to meet you guys,” said King, an ROTC student at USC who reported to the Navy two hours after commencement in 2003. About two years later, he received his wings and now flies multi-engine aircraft. He will be going with the carrier task force when the Lincoln is deployed. Although he hasn’t yet made up his mind, he is leaning toward making a career of the Navy.

“I love what I do. I grew up an immense amount at USC, and I think it prepared me well. Now, I go to USC football games whenever I can.”

Then I was finally ready to face what was by far the most difficult and dangerous aspect of our entire expedition, driving 170 miles home in Southern California’s Friday afternoon traffic!

Bob Calverley is executive director of communications and public relations at the USC Viterbi School of Engineering.