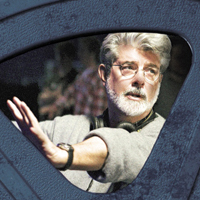 On Aug. 21, a new DVD from Fox Home Entertainment will offer film enthusiasts a rare glimpse into the formative early works of nine directors who, in addition to having made indelible impressions upon the industry and moviegoers alike, can all trace their roots to the USC School of Cinematic Arts.

“This is a fantastic compilation of work from visionary directors whose creative spirit have left an indelible imprint on our pop-culture consciousness,” said Associate Dean Larry Auerbach, who first thought of the unique fund-raising idea more than three years ago and who credits alumnus Bill Mechanic ’79, the former CEO and chairman of Fox Studios, and Sandrine Cassidy, USC’s director of festivals and distribution, with pivotal roles in producing the DVD.

“Together, these films are not only representative of the school, but they also independently appeal to film buffs, aficionados and students alike,” Auerbach added.

Reel Talent, which will retail for $19.98, includes films that showcase the raw themes, motifs and visual flair that would later establish each of the nine filmmakers as cultural trendsetters. Audiences will be able to watch interviews with Bare and Zemeckis as well as Lucas, who recalls his USC experience.

Honored to have his student film Proof included in the collection, Reynolds still remembers his short about a timid young man who makes the skydiving jump of his life as the “most liberating experience I ever had making a movie.”

Referring to Broken Record, his comic love story about a teenage boy and girl who are willing to do whatever it takes to get into the Guinness Book of World Records, Levy said, “My student film is dear to my heart, not only because it literally gave birth to my career, it evinces the beginnings of a sensibility and skill set that still gets me through the day.”

That is a sentiment shared by Zemeckis, whose 1975 award-winning student film Field of Honor, about a Vietnam veteran released from a mental institution only to be barraged by the violent nature of civilian life, is one of two featured shorts.

“When I look back, I can still feel the excitement and thrill that comes with being a filmmaker,” he said. “The process of making movies may have changed, but that feeling is something that remains constant.”

A special screening of Reel Talent will be held on Aug. 22 at Norris Theatre. The event will include a Q&A session with some of the featured directors.