USC and the city of Los Angeles have launched a partnership to guide the growth of an urban forest of shade trees in Eastside communities. The USC urban trees initiative is the latest example of a growing partnership between the city and the university as envisioned by President Carol L. Folt and L.A. Mayor Eric Garcetti in support of the city’s Green New Deal.

USC researchers will guide where the city and others plant the trees to improve the health and quality of life for local residents. They will use computer models, air sensors and other tools to help determine the locations where trees would have the biggest impact on pollution, shade and heat islands.

“This partnership between the city and USC researchers is taking on global warming by improving sustainability where people live,” Folt said. “It’s a good example of how we can enhance the quality of life in our neighborhoods as we face the challenges of climate change.” 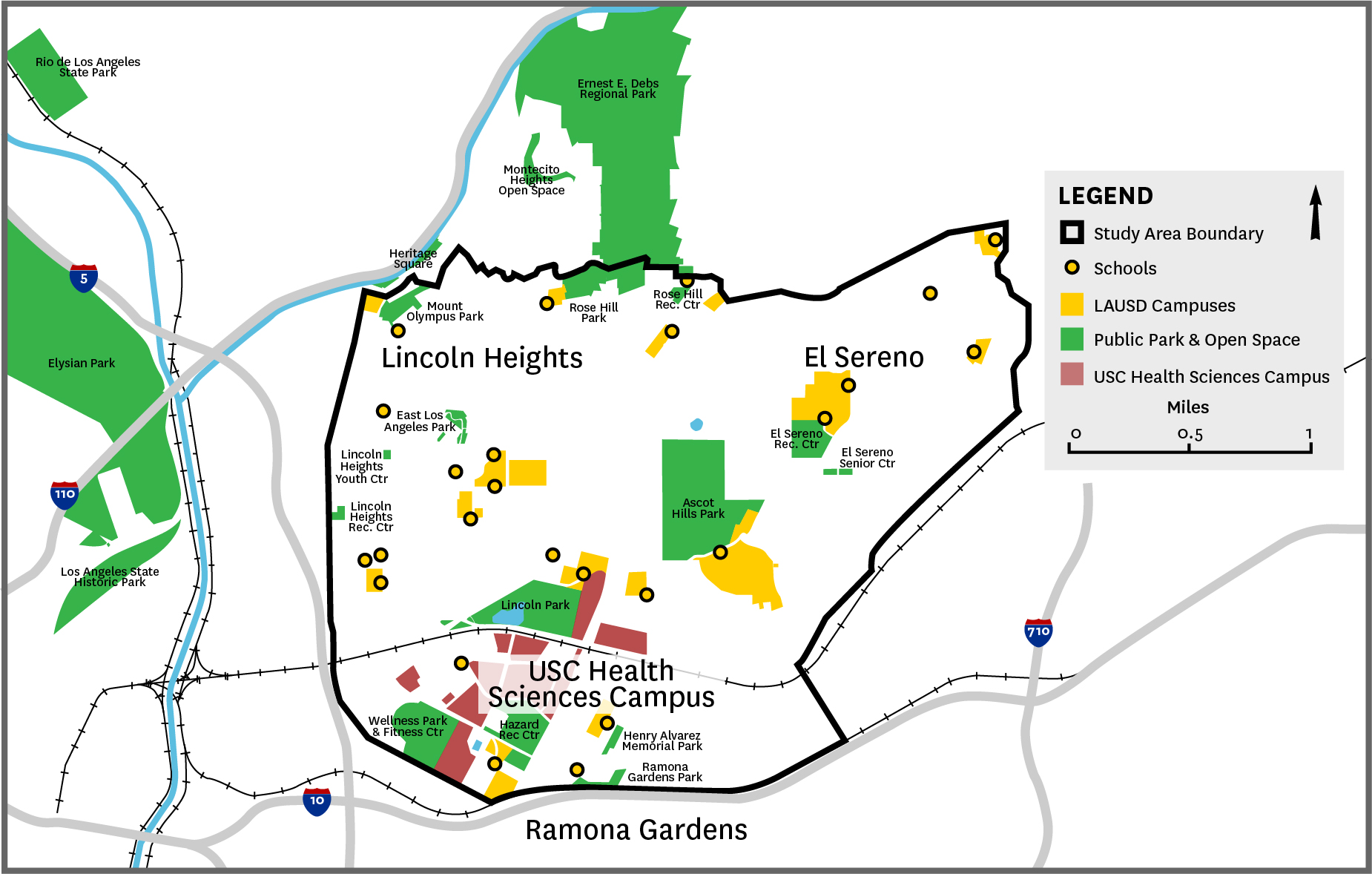 Using an environmental justice lens, the study focuses on a 3.5-square-mile zone northeast of USC’s Health Sciences Campus in Boyle Heights that encompasses much of the Eastside communities of El Sereno, Ramona Gardens and parts of Lincoln Heights. The area suffers from poor air quality and little shade. The median household income in the area is about half that of L.A.’s overall median income of nearly $62,000, according to the U.S. Census Bureau, and people of color comprise most of the population.

This partnership between the city and USC researchers is taking on global warming by improving sustainability where people live.

The USC urban forest initiative is spearheaded by the USC Dornsife College of  Letters, Arts and Sciences’ Public Exchange, and its collaborators include experts and students from USC’s Spatial Sciences Institute, Center for the Study of Urban Critical Zones and Landscape Architecture program.

“The data generated by our team will provide a detailed scientific roadmap to help the city and the community plant an urban forest that maximizes benefits to our environment and human health,” said Kate Weber, director of the Public Exchange, which fast-tracks collaborations between academic experts and the private and public sectors to address pressing challenges.

USC Dornsife’s new Carbon Census network, run by the Center for the Study of Urban Critical Zones, will deploy sensors that measure airborne pollutants to help determine where new trees would most reduce pollution and improve airflow.

The scientific analysis will help city officials and community leaders create greenways and inform where they should concentrate their efforts to bolster climate resiliency, protect public health and promote ecosystems.

Under the Green New Deal, the city aims to plant 90,000 trees citywide. The plan calls for increasing the forest canopy specifically in low-income heat zones by 50% by 2028.

“This work will further our understanding of the strategic use of trees to improve quality of life for all Angelenos and meet the urban forestry goals of L.A.’s Green New Deal,” said Rachel Malarich, the L.A. city forest officer.

We need to reimagine urban spaces so that urban and natural areas are not so different.

The USC project team took great care to listen to the community over the past three months. In a series of virtual meetings, team members met with representatives of local nonprofit groups, city council representatives and business leaders.

In the months ahead, they will meet with more residents and business owners to gain input and make recommendations regarding the plan. It is part of a growing effort by USC to advance sustainability solutions for L.A. by working with the city, among other strategic partners.

“We need to reimagine urban spaces so that urban and natural areas are not so different,” said John Wilson, director of the Spatial Sciences Institute and USC research project leader. “This project reimagines the fabric of cities to be more equitable, resilient, livable and healthy.”

As temps soar, USC experts have hot ideas on what it means for us

Sweltering conditions can have an effect on flights, pollution and your health.

Back to our roots: Native plants are growing again at USC, thanks to student-led effort