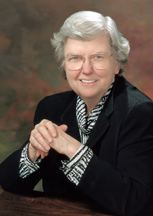 Mary Ellen Avery, president of the American Association for the Advancement of Science (AAAS), will receive an honorary doctorate of science degree at commencement ceremonies for the Keck School of Medicine, recognizing her contributions to the field of medicine.

Avery, who served as physician-in-chief at Children’s Hospital in Boston from 1974 to 1985, is the Thomas Morgan Rotch Distinguished Professor of Pediatrics (emeritus) at Harvard Medical School. She was elected AAAS president in 2001.

Avery helped pioneer the field of newborn medicine in the 1950s, when her research led to a new understanding of neonatal respiratory distress syndrome (RDS)—which at the time was a common, often fatal and little-understood problem. She was the first to identify a deficiency of pulmonary surfactants in lungs of infants as the cause. Her expertise in respiratory problems of newborns and their prevention and treatment has made her a sought-after teacher and speaker throughout the world.

A graduate of Johns Hopkins University School of Medicine, where she was one of only four women in the class of 1952, Avery’s academic achievements also include having received 13 previous honorary degrees from colleges, universities and medical schools. She has also served as a faculty member at Johns Hopkins and later at McGill, and as a visiting professor at universities from Singapore to California.

Her distinguished career has included seats as a council member of both the Institute of Medicine and the National Academy of Sciences, and she has twice been a member of the AAAS Board of Directors. In 1991, she was awarded the National Medal of Science by President George Bush for her work on RDS.