When the Los Angeles Unified School District closed its campuses due to COVID-19, no one anticipated that L.A. students would be learning remotely deep into the fall and possibly into the new year.

The USC Leslie and William McMorrow Neighborhood Academic Initiative, like many educational programs, suddenly faced an unprecedented challenge. For the college prep program to continue providing its curriculum to NAI scholars, it quickly pivoted online. The program also had the foresight to prepare for remote operations in the fall and beyond.

“As the pandemic raged on and it was pretty obvious that online delivery of our programming was here to stay, I made a decision to hire NAI scholars now in college who were engineering or computer science majors,” said Kim Thomas-Barrios, USC’s associate senior vice president of educational partnerships.

The decision proved to be a wise one, as NAI graduates Manolo Calderon, Roberto Sanchez and Emanuel Marquez — also known as the “tech innovators” — were brought on board in the fall and quickly began identifying areas of need to help bridge the digital divide. Calderon recently graduated from the University of California, Davis, with a bachelor’s degree in engineering, while Sanchez and Marquez are students at the USC Dornsife College of Letters, Arts and Sciences and the USC Viterbi School of Engineering, respectively. The team was tasked with improving the user experience for NAI scholars, parents and teachers and finding innovative ways to implement technological advances. 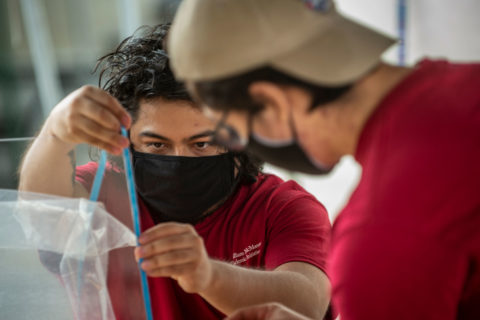 Calderon, left, and Marquez found a way to help the program they had been part of before college. (USC Photo/Gus Ruelas)

“We need to have something that will bring the educators back in, in a way that feels the most normal,” Thomas-Barrios said. The team’s first project would be enhancing the student experience by creating lightboards for online learning, tapping into the inspiration provided by USC Marshall School of Business Professor Emily Nix’s DIY hack.

“I saw the profile on Dr. Nix,” Thomas-Barrios said, “and thought, ‘Good grief, this is something that we need to do.’”

For tech-savvy NAI grads, lightboard cost won’t get in the way of online learning

There was only one problem with the lightboards: cost, which prompted the NAI grads to “put their minds to the task,” Thomas-Barrios said.

“We found a way to make it more cost-effective with simple materials,” Calderon said. “The goal was to make it cheap and quick so that if a teacher or tutor needed one, we could have it the same day.” The USC NAI tech innovators found a way to replicate the lightboards for less than $60 using three materials — four, if you count the markers.

“We took a sneeze shield and we made it into a lightboard that helps teachers engage students,” Marquez said. “It brings a sense of normalcy to online learning.”

Michael Laska, a math teacher at Foshay Learning Center who also teaches at the NAI Saturday Academy, is testing the first prototype, and more units are being built for rapid distribution.

“We have 10 in the pipeline for teachers who are ready to take a look at them,” Thomas-Barrios said. “We are also providing videos on how to use them, which should make it easier to get over the awkwardness.”

This year’s graduates of USC Leslie and William McMorrow Neighborhood Academic Initiative were recognized for their perseverance during uncertain times; all 94 scholars will be attending college in the fall.

Through laptops, tablets and instruction from savvy teachers, the USC Leslie and William McMorrow Neighborhood Academic Initiative strives to keep its local scholars engaged and educated during this unprecedented period.

Even a global pandemic could not stop the USC Leslie and William McMorrow Neighborhood Academic Initiative’s class of 2020 from gathering online to rejoice in their successes.

Nelson Henriquez Jr., who will graduate from the USC Leslie and William McMorrow Neighborhood Academic Initiative this month, has medicine on his mind.